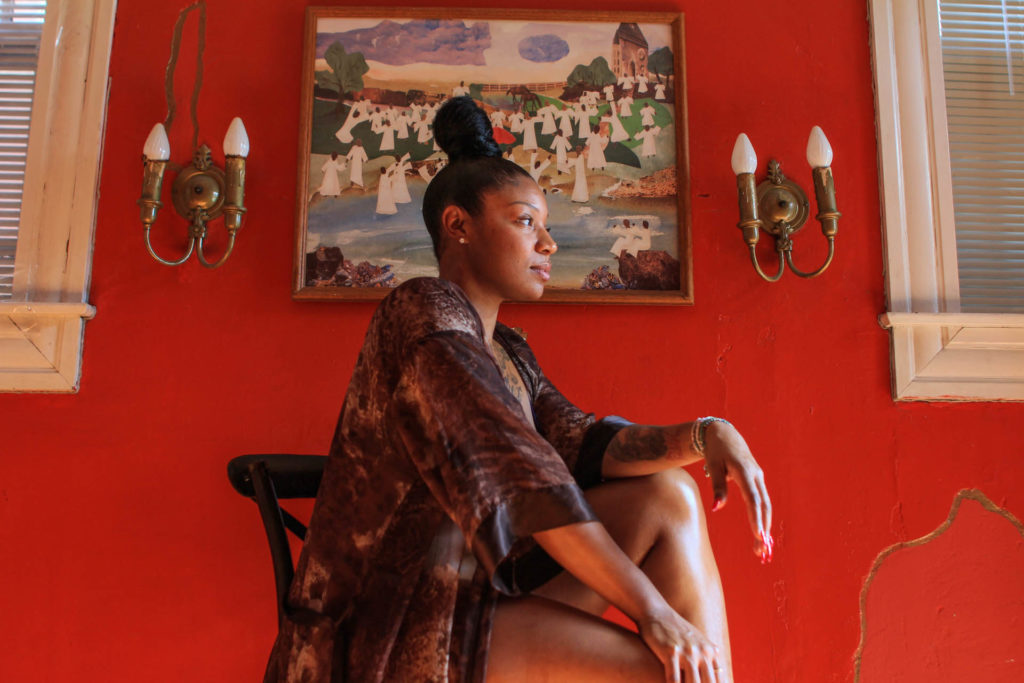 “I’ve never had this many nudes in my phone,” Tamika Dozier said, as she flicked through photos that women and non-binary folks have sent her since she began #LYON — Leak Your Own Nudes — four months ago.

Leading up to a recent #LYON art exhibit Dozier had organized, I chatted with her and others about their experiences around the #LYON movement.

Dozier, the manager at a bourbon bar downtown, was inspired to start #LYON by a man who reached out to her privately on Instagram. He was upset a close friend of hers did not want to date him and was threatening to leak clips from a sex tape he’d made with the friend.

“You’d better get your homegirl before I show this to the whole world,” she said he told her. “We ended up having a very long conversation about the sex tape. I was like, ‘She looks really good. Good angles, like she’s been working out.’ It didn’t go the way he wanted it to go.”

Dozier saw an opportunity to enlighten the man, so she asked, “Do you really think that whatever it is that she did to you that this is going to make it better?” Ultimately, he decided not to leak the tape.

Dozier said she thinks people leak nudes to humiliate women when their egos are hurt. “I started thinking about, how many times does that happen? You share pictures or any type of intimacy with someone and they betray that trust.”

How do you prevent someone from using a past intimate moment against you? Dozier’s response: “You cannot shame me for something I am not ashamed of.” She began leaking her own nudes on Snapchat using hashtags like #thirsttrapforacause and #yesithirsttrapanditworks, “And it does! It really did. I did not expect for it to blossom the way that it did. It was really cool. Then other girls started sending me pictures with #LYON… and giving me permission to leak them. So, I did.”

Some women who reached out to her had been victimized by a local shame group on Facebook. Dozier told the story of a woman whose body had changed after childbirth who got photos of her and began sharing them: “And its hundreds of comments of people sharing memes of things that she looks like, people just dragging her through the mud. Talking about everything on this girl’s body, which she was feeling proud of because she lost all of her baby weight. She was feeling sexy. The picture she sent was to the father of her kids.” Many of the harmful comments had been made by other women. Dozier said.

After leaking the woman’s nudes on her Facebook wall, Dozier said, other women began to post their nudes in the comments and wanted the woman to know “we support you.” It went a long way toward making the woman whose post-baby nudes had been leaked feel liberated.

The work of Imani Dennison was particularly noteworthy. She photographed Dozier, Ashanti Waybriel, Talesha Wilson and Pam Newman in the nude and the photos pulsed with power and revelry in the self. Dennison said of the experience that she felt “trusted, important,” and “[It was a] privilege that they were so open and comfortable with me.”

“Immediately, I knew the photos were amazing… Perfection! Melanin shining and glowing, super confident, affirming what they were doing,” she said.

Waybriel agreed. “It was like a connection I’ve never shared with anyone before… It was so quiet and I felt so loved and protected.”

As did Newman. “The shoot was a series of beautiful black femme magic moments. I’m so thankful for being able to participate and enjoy a beautiful afternoon with such magical feminine people.”

But Wilson summed up the experience and movement best, by saying #LYON is an opportunity to stand in solidarity with those “whose nudes are leaked without their consent who are somewhere crying because social media has destroyed them for having some fun.”