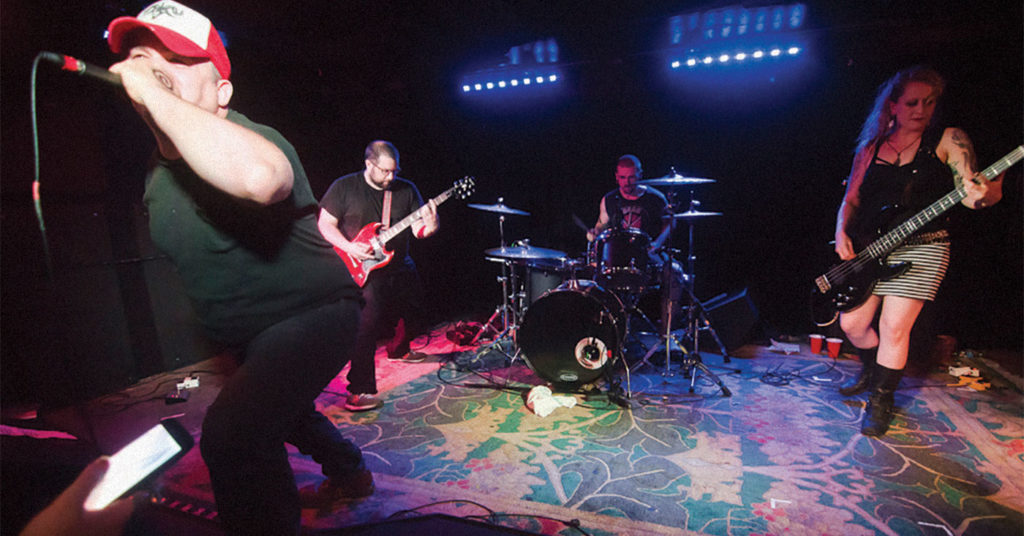 For the last three years, I Have a Knife has been creating a beautiful ruckus through punk sneer and hardcore fury. The band, with local luminary Sean Garrison on vocals, Greg Livingston on guitar, Gabrielle Kays on bass and Evan Wallace on drums, recently released their second — and final — record, Of Criminals and Kings.

They broke up prior to their April 8 release show, which was cancelled, but it was hard to tell when I recently met up with them. The band was in good spirits, speaking highly of one another and cracking inside jokes. Discussing their new album, the band had uniform praise for the recording session with Lexington’s Jason Groves.

“We set out to pretty much do a live recording,” Kays said about being in the studio for Of Criminals and Kings, which I Have A Knife put out independently. “We did the whole thing in a day and a half. Same room, all the equipment set up, and [we] let it roll. What we did correctly is that we played enough shows and sold merch and saved enough money that we could just go in there and pay for it, which is why we were able to put it out so quickly.”

I Have a Knife started with Livingston. Compelled for decades to work with Garrison on a project, Livingston recorded himself playing guitar, while running on a treadmill, and gave the recording to Garrison. Kays and Wallace came in quickly thereafter.

“He had to have something to do,” Garrison said of Livingston. “We’ve been playing together for three years. That’s way longer than I thought it would be. I thought in a year, I would be able to get out, and they would get another singer.”

While not the sole songwriter, Livingston is a prolific composer with a long-and-storied history of projects, including bands such as Hedge, Chime Hours and Ousia. There is an earnestness when he speaks about his work with IHAK.

“I have to admit when the band started, I would write songs and send them to Sean and get approval, and then bring them to practice,” Livingston said. “But, as the band progressed, I felt like I was taking bigger chances. I took chances where I could. I wanted to showcase everyone’s talents. I was very cognizant to make sure that there were parts that were just drum and bass.”

Their debut album, Stupid and Futile Gestures, was a band taking steps toward a unified vision. Especially in comparison to Of Criminals and Kings, the first album is a snapshot in time, a band coming together and figuring it out.

“The first record was obviously us, [but] this one seemed more cohesive,” Wallace said. “This is an IHAK record. I just think that with the other one, it has the ebbs and flows of a new band. This one is pretty plateaued straight through all nine songs. There is definitely a cohesion between the two, but this one works better.”

That sentiment can be heard on Of Criminals and Kings, which is raw and unflinching, but definitely representative of a cohesive approach. There is a quiet restraint running in the background, which speaks to a comfort in their combined efforts, but it still never loses any of the rougher edges or aesthetic punch.

Thematically, the album is unmistakably political, such as the lyrics from the song “Pumpkin Head”: “The time has come / Uncivil war / The mocking of the lame, the queer, the blind, the poor / The pumpkin head / Their newest god / So let the chaos reign,” Garrison sings, backed by a furious blast of hardcore rage.

“When it’s this bad, you have to say something,” Garrison said. “You can’t really bluff anymore to be funny. I didn’t think it was intense enough to warrant getting sanctimonious about. But things reach a point where your commentary is no longer sanctimonious. If something is out of control, it’s out of control. You just have to say this is no longer hilarious, this is scary.”

Unfortunately, following a gig in Indianapolis, which the band declined to talk about, Garrison pulled the plug on his involvement.

Right now, each of the members is already weighing future projects, be that music or, in Garrison’s case, the continued pursuit of his artwork.

“When I’m in that basement, I can’t bum out people who are witness tangentially to my horse shit,” Garrison said. •

I Have A Knife’s album Of Criminals and Kings can be purchased through their Bandcamp page, either via digital download or a CD.