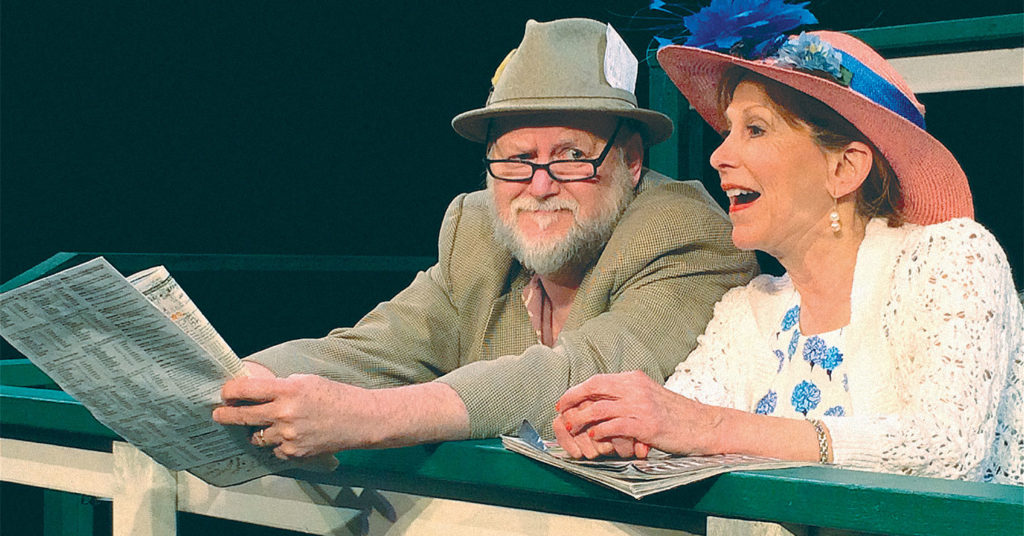 In 'I Bet on the Nag,' left-right, Juergen K. Tossmann and Rita Hight.Photo by John Bochan

The final program of the Humana Festival of New American Plays, always a collection of short plays, is usually the theatrical of a mignardise — a tiny sweet confection that chefs might send along with the coffee at the end of a meal.

That’s not always the case.

As I’ve mentioned before, one of the finest performances I’ve seen at Actors Theatre of Louisville (or anyplace, for that matter) was at the 1981 Humana Festival, where Susan Kingsley, wielding a glittering baton, played the extraordinary “Twirler,” a one-woman play by the pseudonymous Jane Martin.

This year, there were three 10-minute plays on the bill.

“Home Invasion,” by Krista Knight and directed by Eric Hoff, is a droll ghost story skit: Two bedsheet-style ghosts (Andrea Syglowski and Kelly McAndrew) use social media to lure a couple of unsuspecting burglars (Carmen M. Herlihy and Sam Breslin Wright) to an empty home — then proceed to spook them to death.

“Melto Man and Lady Mantis,” by Eric Pfeffinger, and also directed by Hoff, is another fun slice of humor. Here, we have a tax accountant (Jeff Biehl) consulting with a deceitful client (Elia Monte-Brown). The gag is that industrial accidents have transformed both into mutants — a man whose flesh is constantly melting, and a woman with the pincers and personality of a praying mantis, complete with green, raptorial forelegs. A clever script (and a few pointed references to industrial regulation) plus a great fight scene (choreographed by the always imaginative Ryan Bourque) came together in a delightful sketch.

Will Eno’s “The New Line,” directed by Les Waters, was another creature altogether, a genuinely-provocative and memorable script rooted in the tropes of the fashion world. Beth Dixon, playing the master of ceremonies at a fashion show, narrates as a model (played by Kathiamarice Lopez) strikes poses that illustrate the “drapeability and reliability” of an “off-white skirt with a bias cut” finished off with an M60 bullet belt. It’s an ensemble, she says, that whispers, “Good evening loud.”

Over the course of the monologue, Dixon reads this outfit as if it were a newspaper. “The majesty of the fold … it puts one in mind of Europe,” she says. “There you are sitting in Brussels, looking for coffee in the early morning. The gray skies. The cobblestones. A single muddy work boot, spattered with blood, sitting by a fountain.” Eno’s vision, delivered in Dixon’s smoothly sculpted tones, is chilling, funny, and challenging.

Each year, the final weekend of the Humana Festival hosts members of ATCA (the American Theatre Critics Association), who gather to view the plays and announce annual awards for new plays. Two awards went to plays that premiered at Chicago’s Steppenwolf Theatre: “Mary Page Marlowe,” by Tracy Letts, and “Visiting Edna,” by David Rabe. A third winner, Michael Cristofer’s “Man in the Ring,” premiered at another Chicago company, the Court Theater. And Nate Epler earned an award for his play, “The Ice Treatment,” which premiered in a partnership between the Nashville Repertory Theatre and Actors Bridge Ensemble.

This year’s awards were marked by an unusual sense of urgency and a purposeful focus on the role of theater in what one speaker described as “perilous times.” Jim Steinberg, representing the Harold and Mimi Steinberg Charitable Trust, which partners with ATCA to sponsor the awards, noted that, “for 2,500 years, playwrights have been the voice and conscience of their society.” Since the origins of theater in Greece, he said, playwrights have aimed to expand participation in a culture of discourse by including the voices of those who otherwise might not be heard. “Playwrights,” he said, “ask us to look into a mirror and examine who we are as a collective of people.”

Later, ATL Artistic Director Les Waters asked for the house lights to be dimmed and for the audience to pull out their cellphones and turn on their flashlights as he read the action statement of The Ghostlight Project (theghostlightproject.com). This national campaign, whose name is inspired by the historic tradition of leaving a single light glowing, even in an unoccupied, unused theater, is focused on creating “brave spaces” where principles of inclusion, diversity, and safety are supported and defended.

Another production of note is underway at the Bunbury Theatre. Juergen K. Tossmann’s “I Bet on the Nag” is back for the second year. Personally, I hope it becomes the perennial Louisville deserves. Set at Churchill Downs a few days before the Derby (the track provided seats, and the stage looks like the real thing), this is a two-person comedy that pits a curmudgeonly handicapper against a seemingly clueless newbie to the sport. As I wrote last year (leoweekly.com/2016/04/i-bet-on-the-nag-is-a-sure-thing/), this play is a pleasure regardless of whether you’ve ever opened a Daily Racing Form.