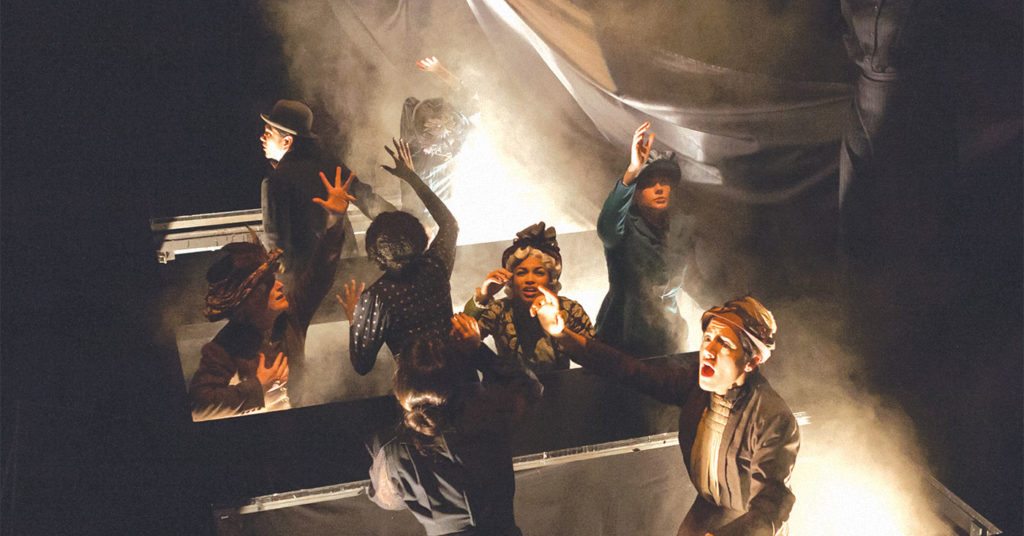 Cast of 'The Many Deaths of Nathan Stubblefield'Photo by Bill Brymer

This year’s Actors Theatre of Louisville Humana Festival of New American Plays runs through Sunday, which means you still have time to see all of the productions. In fact, if you have the stamina, on Saturday and Sunday you can see the entire lineup.

This year’s bill has been extraordinarily strong — and unusually free of controversy. No social-media battles over the legacy of Thomas Merton. No radically-revisionist twists on Ibsen. No patrons leaving in a huff at intermission.

Although I miss the uncomfortable provocations of the last few Festivals, this year’s lineup has offered brilliant, thoughtful writing and superb performances.

The looming anxiety of Basil Kreimendahl’s “We’re Gonna Be Okay,” directed by Lisa Peterson, is set during the Cuban Missile Crisis, but feels timely at a moment when lots of us wish we could bury our heads in the sand (though nowadays, hardly anybody thinks a backyard fallout shelter offers real refuge).

Molly Smith Metzler’s “Cry It Out,” directed by Davis McCallum, brings urgent insight to gender and class issues roles in parenting — and most importantly attacks a popular fallacy about the nature of postpartum depression.

“Recent Alien Abductions,” by Jorge Ignacio Cortiñas and directed by Les Waters, does bring an novel narrative approach to its dark topic. That, coupled with the virtuosity of Jon Norman Schneider and the rest of the cast, and remarkable production values (especially in the riveting closing segment), make for a memorable piece of theater.

Because LEO’s April Fools’ Day Fake Issue interrupts the usual editorial cycle, we haven’t yet covered two Humana Festival productions (and two other important productions from other companies), so it’s time to catch up.

Chelsea Marcantel’s “Airness,” directed by Meredith McDonough, is, in a word, dazzling. This may be the most talked-about production of this year’s Humana Festival. It’s a fun, colorful romp set in the world of high-level, air guitar competitions. If you want to see this one, act fast.

There are romantic complications involving a novice air guitarist named Nina (“The Nina”) O’Neal, played by Marinda Anderson. And, in case you’re wondering, one member of the cast, Matt Burns, is both an actor and the 2016 World Air Guitar Champion. He also served as Air Guitar Consultant to the production — a credit I’ve never seen before. The air guitar scenes are a blast — but there’s also a moving sweetness to this story about solidarity against overwhelming odds. Kudos to the technical theater team: Deb O (scenic design), Alison Siple (costumes), Paul Toben (lighting), Lindsay Jones (sound) and Jenny Koons (movement director).

This year’s Professional Training Company production, featuring this year’s ATL Acting Apprentices, is far and away the best such production I’ve ever seen. That’s partly because for the last few years the Apprentice/Intern program has been supported by a substantial gift from the Roy Cockrum Foundation that enables the apprentices to devote themselves full-time to developing their art over the course of the season. Based on what I’ve seen over the last couple of years, I predict these apprentices will emerge as a powerful force in America’s theater/TV/film arts over the next generation.

This production, “The Many Deaths of Nathan Stubblefield,” directed by Eric Hoff, is a thematic assembly of 11 short scripts that deal with important cultural and scientific figures from Kentucky history. Stubblefield himself was a pioneer of wireless telephony. Other episodes deal with topics as diverse as the James Batson Supreme Court (which in 1986 declared race-based peremptory jury challenges unconstitutional), the rise and decline of Louisville’s disco ball industry, the role of women inventors and the foibles of Thomas Edison. The scripts, authored by Jeff Augustin, Sara DeLappe, Claire Kiechel and Ramiz Monseff, are tightly organized, and deftly linked (dramaturgical credits go to Jessica Reese and assistant dramaturg Paige Vehlewald). Technical credits: William Boles (scenic design), Alice Tavener (costumes), Eric Southern (lights), Stowe Nelson (sound).

The Liminal Playhouse, which focuses on provocative, contemporary works, produced “Time Stands Still,” by Donald Margulies and directed Tony Prince, at the Henry Clay Theatre (where Liminal will join Pandora and Bunbury as resident companies next season). “Time Stands Still” is a topical drama about war-zone journalists (played by Sarah Goodwin and David Galloway). The traumas and moral dilemmas they encounter are revealed through their interactions with one another and their friends (played by Brent Gettelfinger and Katherine Martin). Bravely-candid performances (and Katherine Martin’s comic energy) shaped a moving, illuminating production.

El Delirio (and Teatro Tercera Llamado, the other Spanish-language company) usually rely on projected supertitles to translate the script for those who don’t speak Spanish. For this production, El Delirio experimented with headset earphones, low-power transmissions and live translators. The translators held their own, but, overall, live translation seems an ineffective tool. The translations are always a few beats behind the onstage action, and headsets interfere with an audience member’s ability to connect with the feel of the onstage voices. Compromise solution: use one only one side of the headset. It worked for me. And the production was buoyed by the strong interplay between Williams-Overstreet and Clarena Wright as two sparring sisters afflicted by the men in their lives.•