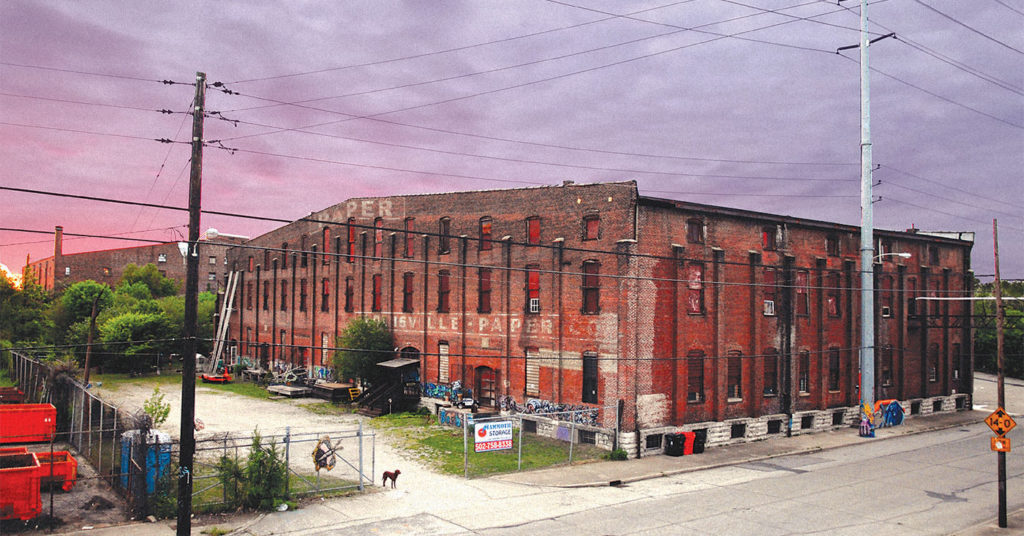 The MAMMOTHPhoto by Aron Conaway

We at the MAMMOTH are marking its fifth anniversary and holding a fundraiser Wednesday, through Friday, May 3–5 to keep this collaborative art, music and creative space open and expanding.

Sadly, you will not be able to go inside the 152-year-old warehouse, because, city officials say structural work is needed.

The spirit of The MAMMOTH began as an idea in 2005 as we departed from the LAVA House to search for a space in which we could work toward new possibilities and frontiers. The goal was to construct a co-op for artists and other creatives to rent or purchase studio and living spaces in one massive building. The underlying principle was to give us — artists, musicians and creatives — an opportunity to create our own living space, studios and to exist among other progressive people.

We bought this 90,000-square foot warehouse on 13th Street in 2012, inspired by repurposed buildings and creative artist communities around the world. We saw potential in the Civil War-era building that survived Louisville’s history of collapse and made it through for renewal.

We called it The MAMMOTH, not only for its enormous size, but also in reference to the animal’s extinction and our own ephemeral possibilities.

We asked: What would you like to do in such a building? Run a co-op grocery, local retail or your own private space? A venue or a rooftop garden? Solar energy with other sustainable technologies? We want to know how you feel you can fit in. What do you need?

Countless hours of volunteer labor from artists and community members helped turn The MAMMOTH Art Studios and Storage into a community space with 21 art studios, band practice spaces and a long-term storage business that subsidized the facility’s creative life. For over three years, The MAMMOTH had been a haven for creativity, a location for photo, movie, music video shoots, photography, glass and print-making, art and music shows, film screenings, art and craft sales, community art projects and meetings.

Courage, community, chaos, struggle… all of that has made this project a roller coaster ride. What we learned from the days of the LAVA House, was brought into this new endeavor. Knowing it was crazy to jump on the back of this beast, we believed in a dream. We knew that pushing this project would be against all odds, but determined ourselves to transcend failure. There has been struggle, frustration and betrayal along the way… but as my friend Mark says, “Everything as it should be.”

This warehouse was built in 1865 by the Union Army toward the end of the Civil War as a medical supply storage facility. After the war, it became Magnolia Ham Co. and several structures were added. By 1920, the building was being used by the Louisville Paper Co., until it was sold to the Louisville Tin and Stove Co.

The characters in The MAMMOTH have changed, the function has changed, the environment has changed… but the vision and the goals have not. This is a project based in evolution. It’s not the product of a hard copy rendering or a solidly planned vision — it’s a process, a project, an experiment.

Development of the heavy timber and old, red brick building halted in August 2015, when the city shut down operations due to minor structural damage in several dozen massive wood pillars in the basement.

Fundraising will allow us to hire a structural engineer and architect and get the necessary permits, materials and tools to repair the poplar columns (about $1,000 each). Once repairs have been made and the city gives its clearance, The MAMMOTH can return to its development as the DIY, multi-use space it was intended to be, where ideas and creativity flourish.

We celebrate the five-year mark to not only look back, but, more importantly, to look forward. This is not a project graced with the financial resources necessary to make it in a day, a month, a year… We will build this together.

But as I mentioned, we will not be inside… So we are bringing the magic outside to share with you. We have a huge yard, where there will be art on display — Art for Evolution. There will be happenings, collaborations, visual and sound installations, live paintings, projections, spoken word poets, paintings, drawings, photo shows, many of Louisville’s finest musical acts, incredible people and energy. There are two stages: one extended from the building’s main stage, and the second in the back of the Baby Jungle, an outdoor sound oasis run by the dynamic group known as Witches and Weird Things.

As the event approaches, I’m finding myself surprised and heartened as I shift from a daunting, overwhelmed feeling to being filled with hope and excitement as our community comes together to lift this project to its next level.

Conaway, owner-operator of The MAMMOTH, is an artist who works on public art sculptures and large-scale outdoor murals. He founded the LAVA House in 2001 and owned Nelligan Hall for 11 years in the Portland neighborhood.