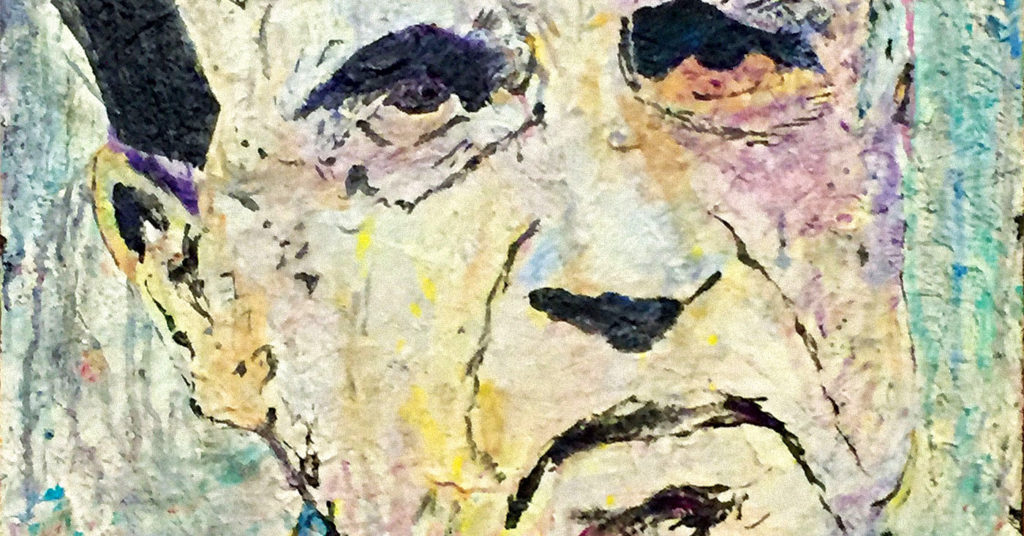 This story is true (as best as it can be remembered by the author), and took place in Denver, Colorado, in October of 1995.

“I’ve got the cigars,” Larry announced through the phone line. “Because what’s the point of a hosting a smoker, if you don’t have fucking cigars?”

“And we’re set up at the Executive House, on 14th,” I confirmed. In the morning, I’d meet Larry Bell at O’Hare as he connected from Kalamazoo so we could both fly to Denver for the Great American Beer Festival — the GABF.

It was 1995, and we were running a duct-taped, steam-rolling microbrewery. We were like a rock band that was just starting to fill bars with strangers-turned-fans, but still broke down on the way to a gig, because the band van was a piece of shit. We made unfiltered beers, hand-packed our bottles with crooked labels into cases, and sealed ‘em up with packing tape because — well, because that’s the way it had to be done. Larry owned the brewery and had hired me to manage sales and marketing. The year before, he’d rocked the Craft Brewers Conference in Austin with a rant on extreme beers and an impromptu rock-’n’-roll cigar smoker party. He’d set a mark, and now he needed to top it. That’s where I came in.

Years of bartending, playing in bands and selling beer for a distributor was my training for brewery work. Mission-critical epic parties were nothing new, so when Larry called at 11 p.m., I went right to work.

First, I called the hotel in Denver. “Hi, we’re checking in to a suite tomorrow, and I wondered if you could share what room number that will be?”

For years, I’d been making half-assed fliers every month for my rock band, Uncle Heavy & the Seeing Eye Horns, so I knew what to do next. I cobbled together four-up, quarter-page fliers in Microsoft Publisher (Lucifer’s own desktop-publishing for software dummies of the late nineties).

I’d hit Kinkos on my way to the airport in the morning, and history would be made.

I proudly slipped Larry a flier at our gate. “Jesus, what did you do?” He laughed. We downed Bloody Marys on the plane, headed for Mile High. As we checked in, I secretly smiled when the room number on our keys matched the fliers.

That night, we hit the massive GABF Brewers reception for brewery folk from all around the country at Wynkoop, one of Denver’s classic brewpubs. We drank beers and laid down a base for more drinking by snatching appetizer after appetizer, spread across dozens of pool tables.

I plucked fliers from my pocket and handed them out generously to cool brewery insiders and beautiful women (bonus points if they happened to be both). I kept passing out invites throughout the Thursday and Friday tasting sessions. We poured beers to thousands of geeked-up fans and party goers. I couldn’t believe how many brewery people I was meeting, and the fliers helped me make hundreds of new friends, no matter that the nights as well as their names and faces were all drenched in a blurry marathon of beer and late night tequila.

“There has been a development,” Larry said solemnly when I tracked him down Saturday afternoon. “They called the room.”

“What are you talking about? Who called the room?” I asked.

“The hotel management. They asked if we were having a party, and if we planned on smoking cigars. Of course, I told them it was the first I’d heard of it!”

He contorted his face and voice in a bizarre impersonation of the hotel manager. “Mr. Bell, we have the flier with your room number on it.”

My heart sank. Were we shut down? Had I already fucked this up before it even began?

Larry continued the impersonation. “Mr. Bell, you have two options. You can either rent a meeting room for this event, or you can prepay a cleaning fee, and we’ll turn off your smoke detectors.”

“How much?” I braced myself.

“Two hundred and fifty bucks,” he said matter of factly.

The party was on. And the hotel was now a co-conspirator.

By 11:30 p.m. Saturday, brewery people had been filling the room for an hour. It was a who’s who of the United States brewing scene. Personalities I had only read about were thanking me for the party as a blue fog of cigar smoke hung above the densely-packed living room of the suite. The galley-size wet bar was packed full of recently-procured booze and the wildly diverse collection of beer that seemed to follow this crowd everywhere. Sinatra crooned from the boombox I had brought by stuffing it into my suitcase, and a giddy contentment rose from the cockeyed cigar-grins spread across everybody’s stogie-stuffed maws.

The denser and drunker the room got, the more dance-like and tribal it became. Hands and arms waved in the air as partiers squeezed past each other to get to the bar or danced or both. Heads bobbed and cigars bounced in time as Frank promised, “The best is yet to come and babe, won’t that be fine…”

It was a room filled with people who worked hard and played harder. Self-satisfaction, pride, and indulgence shaken into an irreverent and decadent cocktail. It was more than a party. All year long, we fought an uphill battle to build the infant microbrew movement against major muscle from the big, multi-national brewery camps and their light-beer sales tactics. The golf-shirt-wearing, blinky-button, Bud Light crowd tried to make us feel like a momentary fad, or like amateurs looking in on their industry. They were like zit-faced bullies waiting to pop our microbrew bubble. But tonight, in Room 1434, we knew something different. We knew that we were rock and roll, and we were here to stay. Room 1434 was our Woodstock.

Time didn’t matter. The party rolled like it would go on forever, but soon enough I was beckoned to the door for the first of many rounds of negotiation with hotel management.

Enter the maintenance guy responsible for closing the windows with his special tool and turning the smoke detectors back on. He was already frustrated because it took him a while before anyone heard him pounding on the door for our attention. His dour expression completed his ensemble of drab work shirt, pocket protector full of pens and tools, and massive ring of keys jangling from his belt. Generally, he reminded me of a junior high school janitor who thought the school would run a helluva lot better if they’d just stop letting those damn kids in. He soberly informed me that it was midnight, so our hotel-negotiated arrangement had expired.

He completed his grim task. “OK, the smoke detectors are back on.” He looked around the room at our gang of n’er do wells, frowned and continued, “And it’s important for you to know that these smoke detectors are extra sensitive,” he looked me squarely in the eye, “to other kinds of smoke  — if you know what I mean.”

“If they go off, they automatically summon the fire department. If the fire department shows up, and you don’t answer the door, like you just didn’t open it for me, they will hatchet your door down.” He leaned in to close the deal, “And that will incur … additional charges.”

I couldn’t quite figure out what I thought was more funny: that he wanted me to believe they had forensically-engineered smoke detectors, capable of zeroing in on “other kinds of smoke,” or that I had just been threatened with the charges I would incur if my door was hatcheted down. I choked back sarcasm and tried to refrain from smiling. I assured him we’d pay closer attention to the door and try to avoid an armed invasion by the fire department. He gave me another long glare, turned and marched out, put off by us keeping him at work later than usual and his general belief that we were all up to no good.

As soon as the door closed, the party swelled again. Now we were in it for the long haul. Over the next few hours, hotel security visited any number of times. By this point, Larry was long gone to wherever with whomever, so I was in charge. By instinct and executive decision, I continued extending the party through peaceful negotiations. At various times, I agreed to turn down the music, shut the door, take it easy and whatever else it took to keep the authorities at bay. I remember making what I thought was a clever point: Since we had rented a suite with a bar, and paid a fee to hold the party, it was essentially a “hotel-approved event.” Their disdain for my logic grew with each visit. It seemed that each time I was at the door, beating a wave of security back, I’d hear the familiar ding of the elevator and see fresh party-recruits appear: bearded, smiling long-hairs walking past the retreating security team with a case of beer on their shoulders. Security would slump their shoulders and look back at me, as if to say “Seriously? They just keep coming!”

Their fear and anguish fed my ambition to boldly go forth.

The party pulsed into the wee hours. Gradually, our herd thinned, but the strong ones continued with great intention. I remember the phone ringing. It had to be after 4 a.m. “Mr. Bueltmann, we’re calling to ask you to please stop your party. Security is telling us that you’re no longer listening to them, and they have informed us that our next move has to be to call the police. We don’t want to call the police Mr. Bueltmann, so we’re pleading with you to stop the party.”

Drunk on beer and tequila and secure in the knowledge that we had just claimed our place in rock-’n’-roll history, I felt a certain calmness come over me, and with it, a desire to soothe the shell-shocked staff, who I was certain were nice people that found themselves in opposition to our voracious appetite for revelry, through no fault of their own.

“I understand,” I began politely, attempting to avoid any slurred words. I began to think about their next options, the way you might consider an opponent’s available chess moves. So what are they going to do? Show up in half an hour, throw me in the drunk tank and write me a ticket for disturbing the peace, or maybe public intox? I smiled silently. My lizard brain was drunk with the possibilities, as much or more than the alcohol. I imagined sending a copy of this potential ticket to Midwest Beer Notes or the Celebrator, the newsprint beer media of our time. It seemed to be a demise fitting for a noble beer soldier, and a price I was willing to pay to make our stand on the hill. I’d be bailed out by lunch and have a ticket suitable for framing in honor of my service. It’d be like Townshend’s smashed Gibson, recovered from the crowd at Woodstock, and I’d still make my flight home. “I appreciate the call. Thanks for your help, I’ll take care of things up here.” I replied.

I stumbled back to the living room, nodded to the five or six remaining die-hards, pushed play on the boombox and said, “Rock and roll…” Our fires dwindled into ashes by natural causes. The police never came. We took the hill, planted our flag and never looked back. •