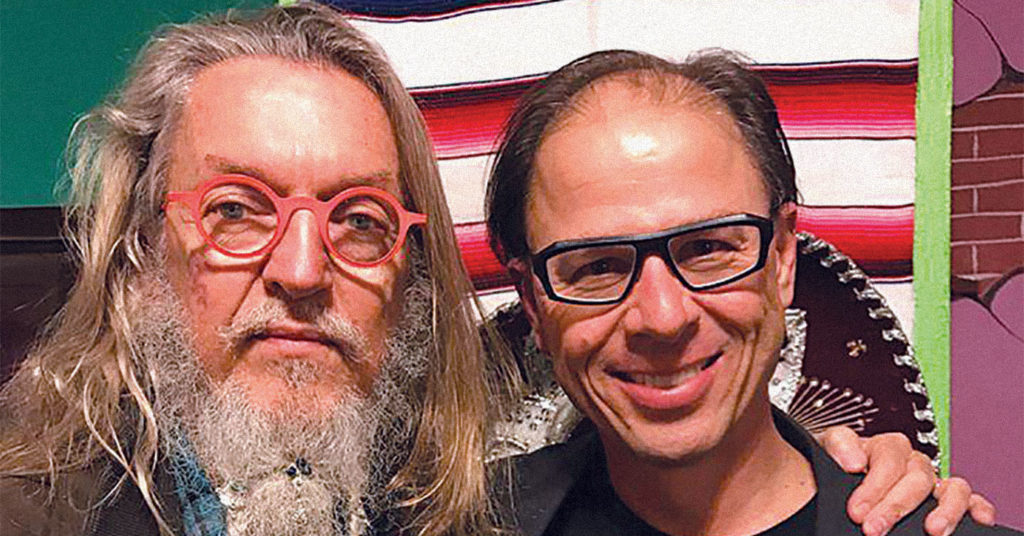 “Fiction is a bridge to the truth that journalism can’t reach. Facts are lies when they’re added up, and the only kind of journalism I can pay much attention to is something like ‘Down and Out in Paris and London’ [George Orwell] … But in order to write that kind of punch-out stuff you have to add up the facts in your own fuzzy way, and to hell with the hired swine who use adding machines.” —Hunter S. Thompson to Knopf Editor Angus Cameron.

Hunter’s ghost has been stirring lately. My old friend growls: “Do me a favor, Ron, and visit my mother Virginia. Those rat bastards are still knocking on her door acting like they’re friends of mine, wanting the goods on me, sniffing for scandal, any scrap of insider info. From what I read I don’t like any of the sons of bitches. You always did watch out for her. Go see her, buddy.”

Now I stop by her grave with a bottle of bourbon and visit, but it’s not ‘til I’m roaming the stacks of the downtown branch of the Louisville Free Public Library a week before GonzoFest 2017 that I see her. There she is, a glowing presence sitting proud in the brightly lit aisles. Virginia’s sweet southern excited voice cracks and her smile puts spring to shame for sparkle. “You’re back after all these years! Thank you for bringing the bottle. I promise not to talk about Hunter today.”

Just the same as when she was alive, midway through her second drink, Virginia Thompson starts talking non-stop about Hunter.

Two hours later, she raises her eyebrows and says, “So what’s this about GonzoFest at the library this year?”

“Well Virginia, after years and years of working to get your famous son honored in Louisville it’s finally happening. Seven years ago my friend Dennie Humphrey and I founded Gonzofest Louisville. Mayor Greg Fischer is a big supporter. And this year, we’ve got a new home. Yep. Our new visionary Library Director Jim Blanton has joined forces with us and we’re having Gonzofest at the library, where you were Librarian! How bout that?! We’ll have a big stage outside on the street where bands and spoken word artists will perform and speeches honoring Hunter will be presented by the mayor and others. And inside your grandson Juan and I will have readings and signings from our new books. Yes your grandson Juan has written a brilliant book about his dad. There will be literary panels discussing Hunter’s works and their impact on literature and culture. Margaret Ann Harrell’s coming up; I know Hunter told you all about her when she was copy-editing Hell’s Angels. And there will be young poets and writers and artists performing and exhibiting their works. And I hear that Jim Blanton has some big announcements to make regarding you and Hunter and the library.”

She smiles and laughs. “All that sounds mighty fine, Ron. Folks focus on the booze, the drugs. It’s about time people saw my boy was the best damned writer Louisville ever spat out. I’ll stick around to see it.”

I stumble back out into April’s whirligig weather. A guy on the corner is holding a copy of the June 16, 1994 issue of Rolling Stone with the page open to Hunter’s Nixon obituary “He Was a Crook.” A girl strolls by, short skirt swinging in the pre-Derby breeze, thumb scrolling down her e-copy of “Gonzo Papers, Vol. 3: Songs of the Doomed: More Notes on the Death of the American Dream.” I hear the harsh growl of a motorcycle engine and someone shouts, “Hell’s Angels rocked, but the whole damned time I was rereading “Fear and Loathing on the Campaign Trail” all I could think? What would Hunter say about 45?”

I grin. It’s time for GonzoFest, Louisville. As I turn the corner, I feel the weight of Hunter’s hand on my shoulder. His familiar voice is sweet now, the gentleman’s crooning song. “I used to say you were crazy as nine loons, Whitehead. I just read your new basketball poems. Basketball poems, man? Hell, these days you’re crazy as 13 loons. Well, you tell the kids I’ll meet ‘em at midnight under that single elm tree in The Highlands on April 14. See ya soon, my friend. •

Ron Whitehead is the GonzoFest co-founder and chief of poeics. GonzoFest 2017 takes place on Saturday, April 15. The full entertainment schedule is below. 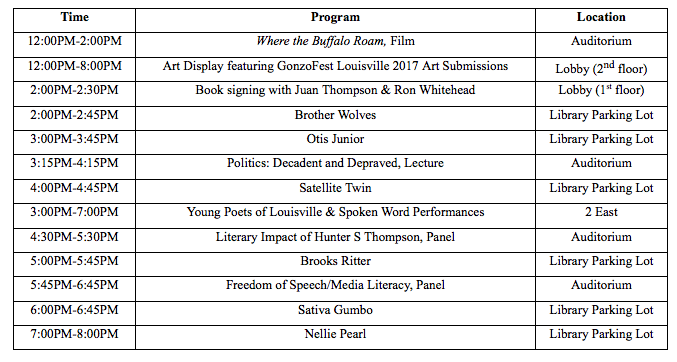