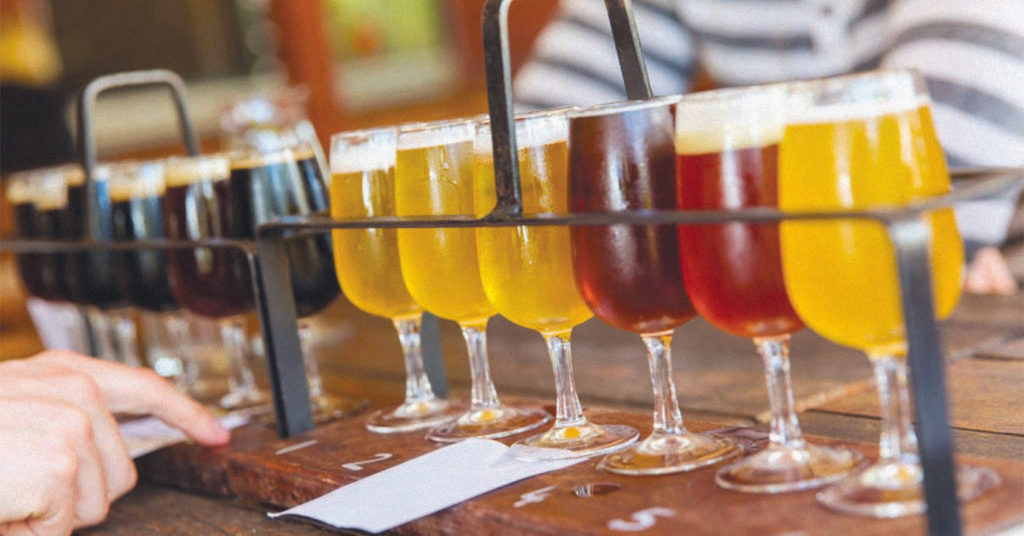 There isn’t a shortage of breweries in Louisville, and the number continues to grow. As such, we greet Holsopple as the newest addition here, all while welcoming back old favorites and innovators in the Louisville and Southern Indiana beer scene. In fact, the biggest obstacle here is finding just one delicious beer to write about per venue, a good problem if ever there were one. Below you’ll find a list of our favorites, from IPAs to Swoolys, and everything in between.

3rd Turn – Fruited Jalapeño Kolsch Swooly
Pineapple, orange and mango are carefully balanced against a jalapeño pairing for a brew that is absolutely extraordinary. By far one of the most exotic beers to make the list, the FJKS is imminently drinkable, smooth and rewarding with a delightful pop on the back end and a sweet, but never cloying aftertaste. Beware at 7.1 percent ABV though, as this is one that can and will easily catch up to you.

Against the Grain – Cock of the Wok
The innovative and wonderfully-named Cock of the Wok is a lovely red ale, cut with hibiscus and tea. As such, there is a sweetness here that is never unwelcome, cut ably by the Saison-like body of the underlying ale. Crisp and juicy, the CotW is refreshing and mild, featuring a deep red body. Clocking in at 5.9 percent ABV, this has a nice aftertaste that bids you farewell with every sip.

Akasha – Fehr’s XL
The Fehr’s XL by Akasha is an American extra lager, light in body and texture, with a pleasing aftertaste. This is what most people have in mind when they picture a beer, a light foam head with champagne-like bubbles vigorously working their way to the top. Easy going down, there are crisp corn and wheat flavors here cut by the nuanced flavor of burnt malts, which are only slightly noticeable. At 5.1 percent ABV and a low IBU, this is an easy beer to reach for when you need to unwind.

Apocalypse – Kumquat IPA
The Kumquat IPA is a juicy and citrusy addition to the rotation at Apocalypse Brewery, and one rich with texture. Not quite so bitter as a traditional IPA, the Kumquat IPA has a deep golden body and smooth aftertaste, heavy on orange and other citrus flavors. At 6.7 percent, it is as delicious and inviting as you might expect.

Cumberland Brews – Moonbow Wit
A seasonal favorite, the Moonbow Wit is a mild delight that never fails to deliver. A cloudy body that lacks any heavy sediment, the Moonbow Wit has a deep-yellow hue, translucent if held to the light. A Witbier style, the Moonbow Wit is  wheat heavy, with a hint of fruit, almost like a Hefeweisen. This is a porch beer if ever there was such a thing, a calming beverage that goes down easy.

Donum Dei – Saison
Donum Dei’s Saison is a light golden-bodied farmhouse-style ale. Despite the citrus elements and baking sugar, this Saison is not especially sweet, offset here by nice floral notes. Between a 6.3 percent ABV and 23 IBU, there is a nice balance between sweet and savory with an emphasis on hops over any one flavoring agent.

Flat 12 – Comfortable Nun
So named as a play on a Pink Floyd classic, the Comfortable Nun is a comforting black IPA, crisp with a symphony of flavors. Aged in whisky barrels, the Comfortable Nun balances a boozy essence, an almost licorice sweetness, with the strong floral notes and higher IBU, part and parcel to an IPA. Don’t let the dark and foreboding body confuse you: This is not like a stout or a porter, thinner in body, but equally dark in appearance.

Floyd County – Cloud 10
Identified as a Northeast IPA, the Cloud 10 lives up to its name, not only for surpassing the already-superlative list, but also with the cloudy blonde body that makes up the beer. There are strong floral notes, with a juicy citrus pop that makes for an especially refreshing beer. A bit stronger at 7.4 percent ABV, the alcohol never plays a huge factor in the taste.

Goodwood – Hemp Gose
The Hemp Gose is Goodwood’s contribution to the burgeoning gose scene, a sour style that privileges tart flavors over hoppiness or a wheat taste that comes with most beer. There is a strong corn undertone that pairs well with the tartness for a nice counterbalance.

Holsopple Brewing – Project Alpha “A” IPA
Subtle fruity notes blunt the otherwise high hop profile of Holsopple’s Project Alpha “A” IPA.  A light burnt auburn coloration and foam head colors the body, balanced by a 7.0 percent ABV. There is a nice pop on the back end that cuts a tangy bitterness that informs the aftertaste. This is hop heavy and potent, and all the better for it.

Mile Wide – Nomah
Mile Wide has an excellent track record with IPAs, and that trend continues with the Nomah, its latest contribution. There are strong citrus notes mixed with floral notes for a sweet and imminently-refreshing beverage. The Nomah comes in at 6.5 percent ABV, making it relatively mild by some standards.

Monnik – Melkweg
The golden-bodied Melkweg by Monnik is a hop-lover’s dream come true. At 10.5 percent ABV, the Melkweg is a beast, but one that avoids the pitfall of the taste of high alcohol content overwhelming the flavor. There is a strong wheat quality, one that ably cuts the hoppier elements of the beer. Expect a very hop-forward drink with strong floral notes with this one.

New Albanian – Tunnel Vision
Belgian Ales are often hard to come by and, even then, aren’t always successful, but the New Albanian hits the target with the Tunnel Vision Belgian Ale. There is a malty quality, replete with a similar brownish body, laden with sediment. As such, this feels like an Abbey ale, including a high 9.5 percent ABV. Still, this is an enchanting and ever-pleasing beer that satisfies on all fronts.

Old Louisville Brewery – First Street Series w/Citra
The First Street Series w/Citra is the latest addition to the Old Louisville Brewery lineup, a light golden-bodied brew with a delicate light foam head. With a 5.9 percent ABV, the alcohol content is never overtly boozy, allowing the citrus notes to really pop. This is fruity and sweet, but never overwhelmingly so, balanced careful against refreshing citra hops.

Red Yeti – Port Fulton Honey Porter
Typically a winter pull, the Red Yeti Port Fulton Honey Porter is a nice leftover from the colder seasons, made more so by the addition of honey as a flavoring agent. A deep, almost entirely opaque brown body adds to an already inviting presentation. The 5.9 percent ABV makes for a relatively easy drink.