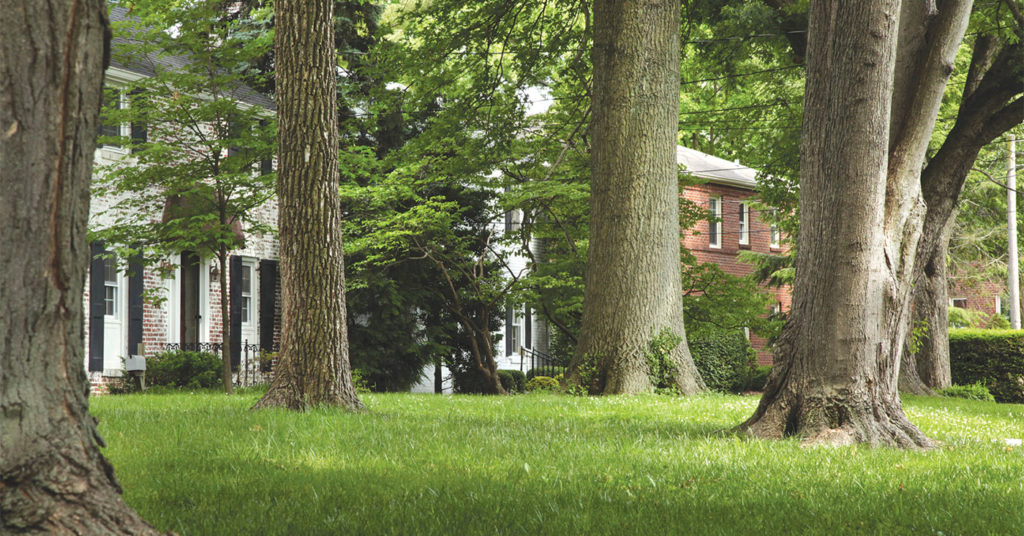 Can Louisville protect its trees?

It is a fair question, since the city loses more than 50,000 trees per year, including many large shade trees cut down around Bowman Field.

And meanwhile, a proposed tree ordinance has languished in a Metro Council committee since December.

If adopted into law, it would govern only trees on public rights of way, and would not follow tougher laws that other cities have adopted to ensure developers protect or replace trees.

But Louisville has been unable to even keep a tree commission, let alone pass a comprehensive ordinance governing the planting, maintenance and removal of trees.

Such a tree ordinance that grows the city’s canopy was the final recommendation of the Louisville Metro Tree Advisory Commission when it disbanded in 2015.

“We wanted to get the city powers that be to focus on trees and we wanted it to be part of the city’s vision,” said Kate Schneider, who co-chaired the panel. “We wanted something that existed from administration to administration.”

She hasn’t given up on the idea, but she is clearly frustrated by how long the process is taking.

“People complain that it has no teeth,” she said, “but even without them they can’t get it passed.”

“The ordinance is very nonthreatening,” she added. “It is so important for the city because it sets a tone, a priority, a vision. It keeps trees on the city’s agenda.”

Some in the city, including its chamber of commerce, Greater Louisville Inc., oppose regulations, favoring education and voluntary, incentive-based measures alone.

Among those undecided about the proposal is Councilwoman Angela Leet, R-7, who said she has questions about the permitting process for maintaining or taking down trees, positing that the fees could pose a hardship for some residents.

“Perhaps the ordinance should say it’s only for tree removal, not pruning or planting,” she told LEO.

She said she’s wary of the resources needed to enforce any new ordinance.

“As we know through other programs, there always turns out to be more need than resources available,” said Leet, owner of ALEETCO, LLC, a construction management company and co-owner of Chamberlin Enterprises, a property development company. “Then, that competes with other things like public safety and affordable housing.”

So the question lingers: Can Louisville protect its trees?

Councilman Bill Hollander, D-9, who sponsored the ordinance with Cheri Bryant Hamilton, D-5, said the bill’s long time in committee is not an accident.

“We deliberately introduced the ordinance back in December knowing that we would be spending a considerable amount of time explaining it to people and working through comments and questions before we would take any formal action on it,” he said.

“The delay doesn’t indicate opposition to the ordinance,” he added. “The delay indicates that it’s taken longer than I would have liked to get it done.”

While much of the ordinance merely pulls together existing code under a comprehensive law, some of its requirements are new, Hollander said.

Specifically, he noted the requirement that property owners plant a new tree in a public right of way for every permit they obtain to take an old one out.

“Surely we can replace a tree in the pubic right of way when one comes down,” Hollander said. “It’s hard to imagine that we can be serious about attacking the declining tree canopy if we continue to let trees come out of the public right of way without replacing them.”

The ordinance would also create a community escrow fund, supported by penalties and contributions, to assist low-income residents with costs of maintaining, removing and planting trees.

Among other things, the proposed ordinance provides for a Division of Community Forestry and a Metro Tree Advisory Committee. It spells out penalties for removal, planting or maintaining trees without a permit, and it allows property owners to protect historic or “specimen” trees on private property.

“Every city that is substantially growing its tree canopy is doing it through active involvement at the municipal level,” he said, responding to written questions submitted by LEO. “This is a matter of public health, and as such, it’s appropriate that Metro be involved.”

Fischer remains optimistic that the measure will pass. “We have worked over the past few months to better explain what the proposed ordinance would do and what it wouldn’t do,” he said. “I’m confident that the council will move on this legislation that is so important to the health of our citizens.”

Louisville is a healthier city because of its trees.

But the city’s tree cover is still shrinking, and the fallout could be serious and expensive.

According to Tree Canopy Assessment, the metro area had canopy coverage of just 37 percent in 2014, down 3 percent since 2004 and lower than American Forests’ recommendation of 40 percent. The same assessment also predicted an additional 10-17 percent loss in the years ahead.

There are plenty of reasons why the canopy is shrinking: commercial development, blight, infestation and trees reaching the end of their life spans, to name a few.

Whatever the reasons, Louisvillians could increasingly feel the loss of these trees through their health — cardiovascular, respiratory and heat-related illnesses  — and in their wallets — higher utility bills. So city leaders from the public and private sectors are scrambling for ways to restore what has been lost.

“We know now it’s an environmental and health problem,” said Michael Hayman, arborist for the city of Seneca Gardens, landscape director at Whitehall House and Gardens, and senior advisor for TreesLouisville. “Losing trees is not just an aesthetic problem.”

There has been some good news. On a frigid Monday, Nov. 21, 2016, city and nonprofit officials, plus some self-described “tree-geeks,” gathered outside at Gilmore Lane Elementary School to announce that a $1 million gift had been made anonymously to plant trees throughout the city. The community launched a fundraising effort to match that donation.

And just recently, a citywide effort through TreesLouisville, to put seedlings in the hands of high school freshmen for replanting, distributed approximately 5,000 young trees.

However, while restoring and preserving the tree canopy seems like a no-brainer, the concept continues to compete with other interests: business, pilot safety and property owner rights.

Those conflicts are playing out right now as the city wrestles with what to do about trees around Bowman Field and the proposed tree ordinance.

Councilwoman Leet, trained as an environmental engineer, said the issue for her is not about whether to protect trees.

“Nobody is going to argue that we don’t need more trees; that is one thing we all agree on,” she said. “We all appreciate trees and the value they provide the community. They’re the things childhood memories are made of.”