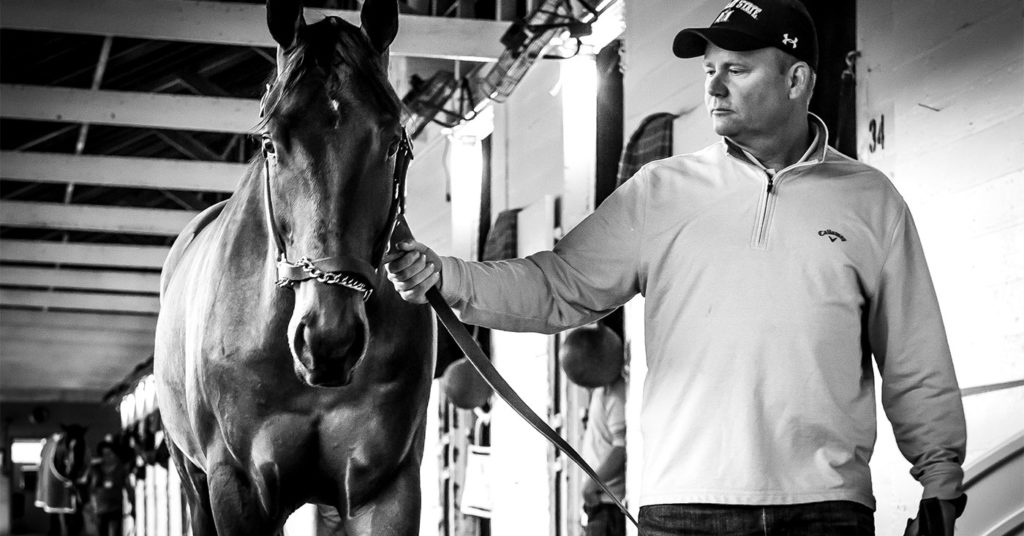 On the first Saturday of every May, 20 or so horses burst from the starting gate at Churchill Downs in the Kentucky Derby, carrying jockeys and the dreams of owners, bettors and trainers.

The owners and the bettors put their money on the race. The trainers put their lives into it.

Trainers are like small business owners, constantly riding out the profession’s hills and valleys.

It’s not for everyone, and even a trainer who has experienced about everything racing can offer may never saddle a horse in the Kentucky Derby.

And it helps to be a morning person with a thick skin; a workaholic who can appeal to deep-pocket people and muck a stall.

Paul McGee, 54, is a trainer whose career started with a bullet at age 25.

A couple buddies of McGee’s racing-fan father spent $18,000 to claim a horse — Balthazar B — for McGee to train. The next year, Balthazar B won the 1988 Grade 3 Clark Handicap at Churchill Downs and five other races to earn more than $210,000.

It was an exceptional start. Racehorses you could buy for the equivalent of a Ford Mustang’s pink slip don’t often go on to win against top competition.

It’s not easy, though. And McGee said he was “off and running.”

He parlayed that eye-catching start into a long and successful career. He has won multiple races against top-level competition with his horses winning more than $31 million total. He has been especially successful winning big races with older horses.

Even so, Kentucky Derby 143 on May 6 will be McGee’s 30th without a horse in that race, though he has been successful through the years winning other stakes races on those days.

“I’ve had an uncanny success rate on Oaks Day and Derby Day,” McGee said. “Lucky for me. It makes it a lot of fun. But obviously to run in the Derby is what we’re all after.”

The Derby is an exceptionally difficult race to make, let alone win. Especially if your barn isn’t loaded with horses bought at auction by bluebloods, sheiks and celebrity chefs.

To qualify for the Kentucky Derby a horse has to earn points in selected prep races as a 2-year-old or 3-year-old. A horse has one shot in the spring of his (or her) 3-year-old year. Most of the million-dollar babies don’t even make the field.

But the dream is there until it’s time to face reality.

“Your mindset is always positive,” McGee said. “You think every 2-year-old you get in the barn might be the next one. You can’t help but to. There’s the relatively-obscure bred horses that make it, and the well-bred ones as well.”

Eventually the track will tell.

“After a couple few starts, it starts to register with you whether or not you have a Derby horse,” he said.

The Derby is the dream. The day-to-day is the reality.

Typically, McGee arrives at the barns at 5 a.m. The grooms are already there, taking care of his 18 horses. At Churchill, the track is open from 6 a.m. to 10 a.m. for the horses to work or gallop.

On race days, McGee will saddle his horses at Churchill or Keeneland and surrounding tracks.

McGee’s wife, Angie, does his books. They were better in the late ‘90s when he had more horses and more were running in stakes races — the top level of racing in the United States.

“Our accountant has a fit every year when he gets our info,” Angie McGee said. “It fluctuates so much.”

Days off are few. A vacation may be a couple days at Lake Cumberland two hours south, or a few days at Gulf Shores, Alabama.

“It’s seven days a week,” McGee said. “It’s hard to take a day off. It makes it difficult for family life. I’m blessed with a beautiful wife and beautiful kids who have been understanding.”

Angie said the hardest part is that Paul missed the kids participate in weekend soccer, T-ball and cheerleading, because those are the busiest days for racing. But at least he’s not riding the horses.

”A lot of trainers don’t ever take a day off. It’s hard,” she said. “But I think to myself that I don’t think it’s as hard as being a jockey’s wife would be.”

For four months in the winter, he moves his stable to New Orleans for the meet at the Fair Grounds. Visits from Angie and kids Matt, 26, Maggie, 24, Alex, 23, and Eddie, 18, make it work.

None of the kids are planning a career at the track, though.

“I couldn’t get enough of it, and they couldn’t care less about it,” McGee said. “Well, I don’t want to say care less. The racetrack was not for them. That’s fine with me.”

McGee, his brother and sisters all wound up sticking with the track after following their late father, Jimmy, an avid horseplayer, to Churchill Downs, Keeneland and other tracks.

Paul seemed destined to be hands-on with the horses.

“He always loved animals,” Marty McGee said. “Whenever we had a dog — there were four of us kids — but my dad always said ‘That’s Paul’s dog.’ We were fine with that.”

McGee beams when he talks about his four-legged favorites, like the sweet-natured filly Sandstorm, who gobbles up attention and peppermints.

“She doesn’t have a mean bone in her body,” he said. “She likes you to play with her ears and just the whole thing. A horse like that you can’t just help but love.

“And you get the real witches too. You get fillies that are mean as snakes.”

McGee started as a hot walker at 15 while attending St. Xavier High School. That job involves leading sweaty horses by hand around the barn to cool off after workouts and races.

He graduated to galloping horses and working as a groom and assistant trainer while going to Bellarmine College, now university.

The key was learning how to communicate with the horses.

“Horses talk to you, and you just have to know their signs,” McGee said.

It’s not mystical. It requires keen observation and a crew that is paying attention as well.

Trainers and grooms will feel for heat in the horses’ legs, which could signify a problem. The lower front legs are where most of the problems appear.

Trainers also want more than exercise out of an exercise rider. They are eager for any insight into the horse.

McGee said he values the feedback of rider Luis Rodriguez, “probably more than even he realizes.”

“One thing I harp on with Roger is eating habits,” McGee said. “The feed tub is very telltale on a lot of horses, too.”

Understanding horses is only half the battle.

“The common statement from a lot of trainers is ‘The horses are easy; the people are the hard part,’” McGee said.

Most “newbie” owners don’t appreciate how expensive owning a horse can be. There is the trainer’s day rate, which covers housing, training and feeding the horse, plus bills for the vet, blacksmith, dentist, transportation and more. An average day rate for a horse in training at Churchill Downs is about $90-$100 but can vary from $75 to $125 depending upon the outfit.

“The bills are always a shock,” McGee said. “They say, ‘Daggone, this is an expensive business!’”

McGee is fortunate to have Samantha Siegel as an owner and family friend. She owns about 10 of his 18 horses and has been with him most of his career.

She is based out of California and is the principal owner of Jay Em Ess Stable, which is named in honor of her late parents Jan and Mace Siegel. Mace was a founder of Macerich Co., which develops, owns and manages shopping malls.

She said she likes that McGee does a good job “keeping her on top of things.”

She especially likes that he doesn’t wait forever to run a horse.

McGee’s other owners, at any time, may be individuals or syndicates, which can have 20 or so investors who pitch in on a horse.

One friction point with owners is what type of races to run the horse in.

“And there comes a point where they say, ‘I don’t like running last. Can we be more competitive?’ And therein lies the class drop.”

Owners also can be disappointed waiting months for the horse to run. Races have all kinds of conditions — the length of the race; type of surface; age of the horses; how often the horses have won, if at all; plus whether it is a claiming race, allowance or stakes race.

A trainer may point a horse to a race that seems like a perfect fit, and the race may get only a couple of other horses entered and doesn’t go.

“So you have to answer to them on that,” McGee said. “They say, “I thought we were running on May 15.’ … That can be frustrating for trainers and owners. You may have to wait weeks for your race to come around again.”

One area where McGee is happy to let owners have a say is in picking a jockey, as he feels the Churchill Downs and Fair Grounds jockey colonies are plenty deep.

“Owners like that input,” he said. “So I say what about Corey Lanerie on this horse, or what about getting Robby Albarado on this horse? I like it when they pick the rider, because they get the input, and it’s somewhat out of your hands.”

Still, every trainer knows the feeling of being fired by an owner who decides some other trainer might do better by their horse.

That can sting. The even-keeled McGee admits it “was a little upsetting” when the owners of Balthazar B, his first big success, switched trainers. He still speaks to them, though.

“It’s good for the game,” she said. “It keeps competition going. Paul has benefited from it, too.”

Bad news on and off the track is unavoidable, and part of the trainer’s job is making those calls.

“Some owners take defeats better than others,” he said. “I think that to me honesty is a big thing. Owners want to know if things aren’t going well. You can’t sweep problems under the rug — if they are sick or if they’re off.”

Trainers have different approaches to appealing to owners. Some are heavily into marketing and soliciting new business. McGee figures winning is the best advertising. He has a modest website for Paul J. McGee Racing Stables that highlights his more than 1,000 career wins.

It’s a business with good reason to always watch your step. Not only because you might really step in something, but because trainers are held responsible for horses in their care. Period.

A college coach might get off the hook if his players are found violating rules. A trainer can be fined, suspended or worse if his horses test positive — even by a microscopic amount — for a substance not allowed on race day. It doesn’t matter if the trainer was hundreds of miles away.

Heartbreak and disappointment are also a given.

“It’s definitely a roller-coaster ride,” McGee said. “The highs are high and the lows are low. Every trainer back here would tell you that.”

Yet the dirt under your boots, the stable-area soundtrack of horses whinnying and clop-clopping and the jibes from fellow horsemen and women are pretty special, too.

“The backside in the mornings is very alluring to me and still is to this day,” McGee said. “I think that horse racing is a great sport. The mornings are fun and the afternoons are fun.”

Said Angie McGee: “One of our horses won on Oaks day last year. All of our guests were so excited. It made the whole day special. Winning the Derby is so far-fetched, but it would be nice. That would be the best day of our lives.” • 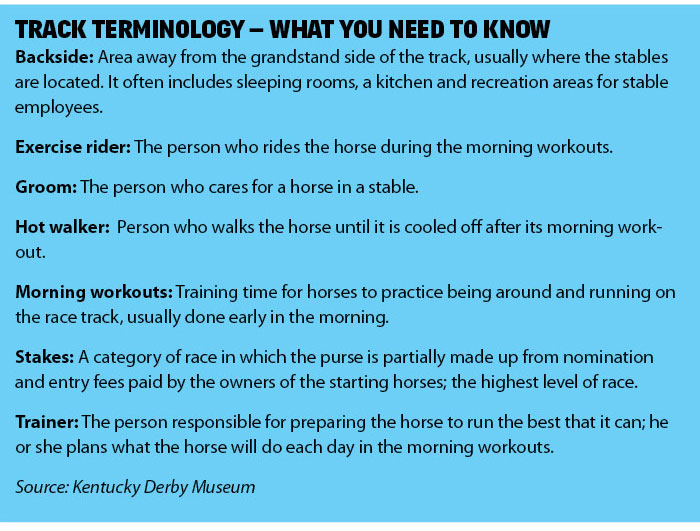