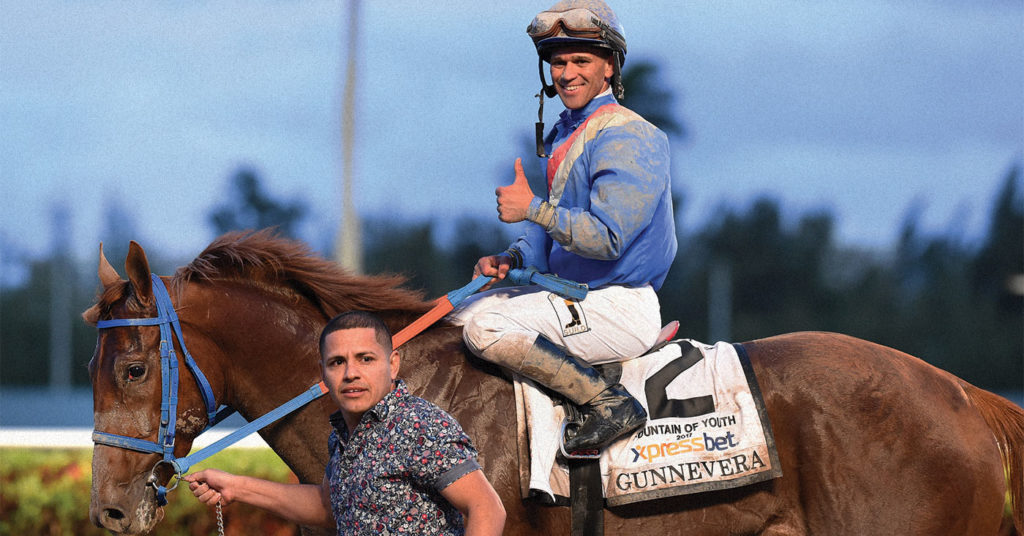 Derby hopeful Gennevera and jockey Javier Castellano, after winning the Fountain of Youth Stakes at Gulfstream Park, in Miami.Photo by Lauren King

After the Kentucky Derby was won for the fourth time in a row by the betting favorite last year, the Racing God turned the calendar to 2017 and crooked a little smile.

“Think I’ll make this one a little harder, heh-heh,” said the Racing God.

And so he has.

(Note: We’re using “he”, when it could be “she” — though we don’t think the Racing God is gender specific. Like Lady Luck.)

Instead of handing millions of Derby fans another solid gold favorite on a sterling silver platter, the Racing God has offered up a fickle favorite — whose fate is still unknown.

At first, it was all about Classic Empire.

Then, he took that one away, and everybody had to find a different hero horse.

But one thing we do know is the pari-mutuel payoffs posted for the 143rd Run for the Roses won’t be a rerun of 2016.

As you will recall, 2-1 favorite Nyquist won for fun last year, followed home by the second choice in the betting, followed by the third choice — producing the lowest, most pitiful trifecta payoff in Derby history.

I remember sifting through my tote tickets at the end of the day to discover I actually had one of those $86 jobs, as part of some larger speculation. Outside the track I slipped the ticket to a guy on a box bellowing, “The end is near.”

But that won’t happen this year, because there are all sorts of horses — I make it six — that could win the Kentucky Derby. And a bunch more that could easily fill up the second and third slots. Even if favored Classic Empire wins it, there’s no way in the world of arithmetic the thing could come in under $100 again.

The advice: Find your horses and begin betting. This could be the year the Racing God smiles upon you!

Here’s a look at my top choices (alphabetically):

Always Dreaming’s best asset might be rider Johnny Velazquez. That pair danced to victory in the Florida Derby, with Velazquez  placing ‘Dreamy in perfect position, near the front, letting the speedballs carry his horse along. When he pounced, they were gone. It’s an oft-successful tactic for the Kentucky Derby, too. Pedigree is the question: Always Dreaming hails from the Derby-preferred Raise a Native sire line, but there’s no stamina on the mom’s side.

The aforementioned Classic Empire ruled as the champion two-year-old of 2016, and was favored over the winter for the 2017 Kentucky Derby. But the horse began poorly with a lackluster effort in Miami. It was discovered Classic Empire had a foot abcess, which was treated. A common ailment with time-tested remedies. But when asked to train again, Classic Empire declined. Wouldn’t go. Trainer Mark Casse shipped the colt from Miami to a quiet training farm near Ocala, Florida, and the headstrong horse responded with excellent workouts and a happy demeanor. He’d missed a race and training time, but came rolling down the center of the track under jockey Julien Leparoux to snatch the Arkansas Derby. Like a good horse.

The question is: Did that big effort take too much out of him after missing training time? Or did it bring the colt along perfectly for a big effort in the Kentucky Derby?

Owners John and Debbie Oxley won the 2001 Kentucky Derby with Monarchos. Debbie is a native Louisvillian. The horse is a Kentuckian, himself, also from the Raise A Native line, with just touches of stamina back a ways on the dam’s side.

What I like about Gormley is he’s a fighter. That’s how he won two stakes this spring in California, including the Santa Anita Derby — digging in to win.

Plenty of Derby connections here: Owned by Jerry Moss and Ann Moss, and trained by John Shirreffs, who teamed to take the 2005 Derby with Giacomo, at 50-1.Three-time Derby winner Victor Espinoza has the mount. Gormley has a tough, race-horse pedigree, with enough stamina highlights to make run at the Roses.

If you’re looking for Gunnevera early, don’t search for him in front. This is a horse who drops back, then comes from the clouds. You know how they have the split screen TV monitors at the tracks, with one split showing the horses in front, then the other showing a stretched-out panoramic view of the entire field? Well, when Gunnevera won the Saratoga Special last summer, he was back so far he wasn’t even on the screen. Then the same thing winning the Delta Downs Jackpot, and again in the Fountain of Youth, at Gulfstream Park. In his last start, Gunnevera was never going to catch Always Dreaming in the Florida Derby, but did come along for third.

Now. Your job is to decide if a bigger field and an extra quarter mile of the Kentucky Derby will suit Gunnevera perfectly. Or, is he just a middle closer, that will be as challenged as most by the Derby Distance?

Who knows? Gunnevera might, over there in Barn 41 checking over his 7-9-10-2-3 Dosage Profile, thinking, “Let’s have a look at those Twin Spires.”

Most people don’t know that racetracks pay horse owners to give their horses Irish names — knowing the sons and daughters of the Emerald Isle will rush out to the track to bet on them.

But Irish War Cry might be worth a bet. He looked pretty sharp winning in New York.

The longest leap of faith a bettor might make in this Derby is a serious wager on Thunder Snow, the winner of the U.A.E. Derby, in Dubai. What is it, a 10,000 miles plane trip from Dubai to Louisville? And none of the Dubai horses have ever come close in the Kentucky Derby.

Of course, most of them were sprinters, and wilted on cue in the Derby. But this one is a good horse, with a deep-distance pedigree. (Though he’s awfully long on Northern Dancer blood, which hasn’t fared well in the Kentucky Derby.) Bred in Ireland, Thunder Snow showed his class on the grass in Europe at two, but has since run exclusively on dirt in Dubai. He won the 1 3/16 miles U.A.E. Derby in a thrilling battle with Japanese star Epicharis. World-class horses dueling the length of the stretch — with Thunder Snow taking it on the wire.

Special plus: Belgian jockey Cristophe Soumillon is one of the world’s premier riders, with success in the States. Plus he’s married to a former Miss France.

Here are some less heralded horses who’ve caught the eye:

Irad appears to be finding his strongest stride now. McCracken worked sharply at Churchill Downs earlier this week. It’s his home track. Fast and Accurate has never met this kind of competition. But if a deep trifecta “part wheel” is your kind of bet, why not use F n’ A? If he hits the board you’ll be looking at a five-figure tri. Patch has only one eye and wears a patch, of course. The jockey has a peg leg and carries a sword. Hey, you know lots of people don’t care a fig for Ragozin Sheets and Beyer Speed Figures. Why not a pirate horse?

Hoping to get into the race: Royal Mo, with Gary Stevens, and Sonnetteer, with Kent Desormeaux — both jocks searching for a fourth Kentucky Derby victory, and both horses with a chance at the ride of their lives. 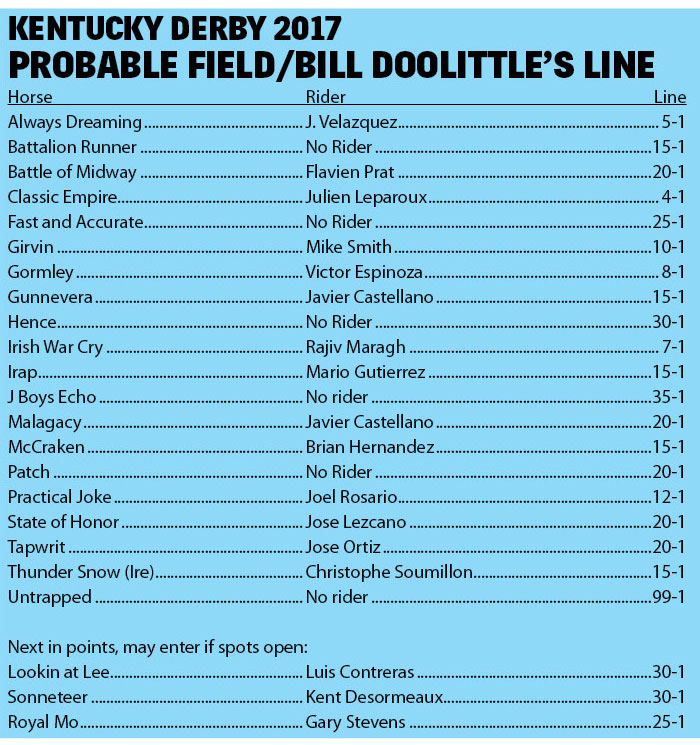