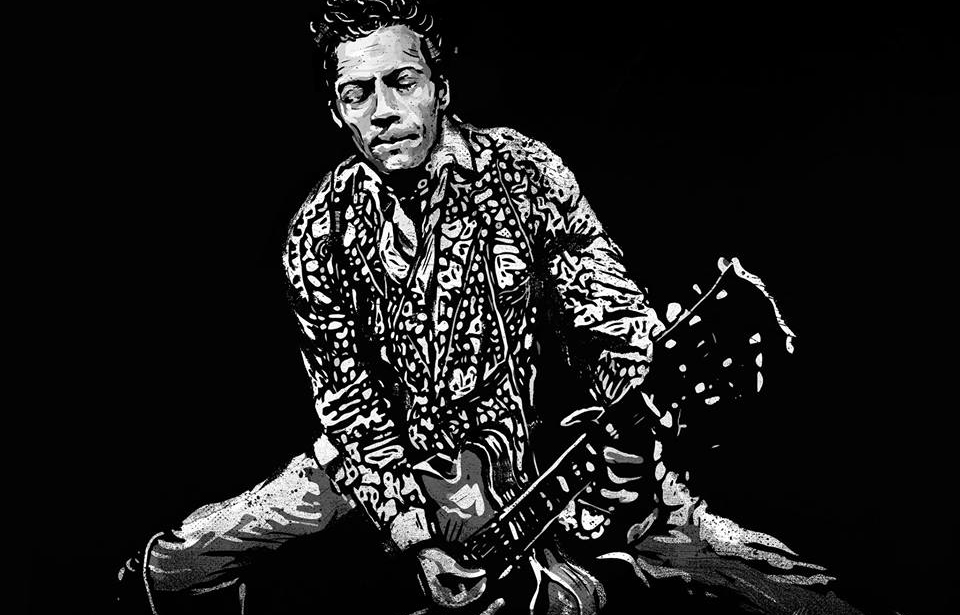 In the summer of 1996 I was invited by the Oglala Sioux Tribe to perform at a benefit concert at Pine Ridge Indian Reservation in South Dakota. The Badlands. I was the only poet. Musicians such as Taj Mahal, Whitesnake, and Dub Syndicate were on the bill. Major acts. But none bigger than Chuck Berry. Chuck was due to perform on the third and final night as the closer, the headliner, the king.

But on the second day, a massive storm whipped through Pine Ridge and destroyed much of the stage rigging. Tents were flattened. People fled, and took cover in tool sheds, cabins, abandoned cars. The next morning was clear and beautiful. Coyotes howled. Grasshoppers — millions of them — peppered the landscape and moved in wafts across the prairie. Concert organizers said they’d continue with the show, and that Chuck Berry would play later that night. But hours passed with no sign of him. The last we heard, he was in Rapid City — about 80 miles away. But the airports were closed. Lines were dead. There was talk of people getting lost on the desolate roads and simply disappearing. Would Chuck show up? Is he OK?

There was a sense of gloom and nervousness in the air. But I’d continue to wait. Besides, I had to be on stage after Whitesnake. So, I cleaned up my camping area, which was located about 100 yards from backstage, and thumbed through pages of poems, now wet and dog-eared. I hung some pages on a cactus to dry, and even more on dry paper towels which had miraculously survived the storm. Then, I went back to the catering tent for a sandwich. The stage manager looked excited as he mouthed words into his walkie-talkie.

Then, out of the dusty horizon, I saw a car speeding toward the concert venue. As it got closer, a halo surrounded the vehicle — an orb. Finally, it made its way backstage; a filthy dirty beautiful Lincoln Town Car. There was crushed grasshopper crud spread all across the front grill, hood, and windshield. We couldn’t see who was inside. Then, the driver’s door opened and a long black-suited leg and cowboy boot appeared. It was Chuck Berry!

Chuck opened the back door of the Lincoln and pulled out a guitar case — and the rockers who were gathered backstage suddenly turned into a pile of mush. Chuck stared at the grasshopper-encrusted windshield for a moment, then turned toward the catering tables, right where I was standing. People moved out of his way as he walked. “Any paper towels,” asked Chuck. “Sure,” I said. Then, I turned around and headed toward my tent. As I moved farther from the stage area, and closer to my tent, I noticed two sets of legs moving through the prairie grass. It was just me and Chuck.

“Man, look at all those stars,” Chuck said, as he removed his hat and stared at the clear dusk sky. “It never gets old.” Then we approached my tent, and I retrieved the paper towels. “Wow!” Chuck said, laughing and pointing to the cactus with my poems hanging on it. “A Christmas Tree!” I told him they were my poems, and that I’ll be reading on stage later. “Poetry,” Chuck said. “That’s wonderful. I look forward to it!” Then, I told him about the storm, and how it had destroyed part of the stage. “Hope it doesn’t seem unprofessional,” I said. “Yeah, well,” Chuck said. “But, Chuck,” I said. “If it’s professional, then it AIN’T rock ‘n’ roll!” His eyes widened as he gasped. “I LOVE that!” he said.

We returned to the car and Chuck cleaned the windshield. “You’re on, Frank,” the stage manager said. “Then, Chuck Berry, you’re on. I need you both side stage immediately.” When I was done with my poetry set, I turned and there was Chuck. “I loved it, Frank,” he said. Then we hugged. “You are a true rock ‘n’ roll poet,” he said. Then, he took the stage and greeted the crowd. He thanked everyone for waiting so patiently and apologized for him being late and ‘unprofessional’. Then he said, “As a great poet once told me: ‘If it’s professional, then it AIN’T rock ‘n’ roll!” The crowd roared, and Chuck fired into Johnny B. Goode.

Later than night, I slept with the tent open — one with the world, one with the coyotes, rattlesnakes, grasshoppers, and the memory of Chuck Berry forever in my head.

Frank Messina is an American poet, actor and artist from New Jersey. He is the author of four books of poetry including Disorderly Conduct, and Full Count: The Book of Mets Poetry. His work has appeared in the NY Times, Beloit Poetry Journal, Sports Illustrated, and LEO Weekly. His manuscript of 9/11 related works was accessioned into the permanent collection of the National September 11 Memorial & Museum in New York City. More info about Frank can be found at frankmessina.com.