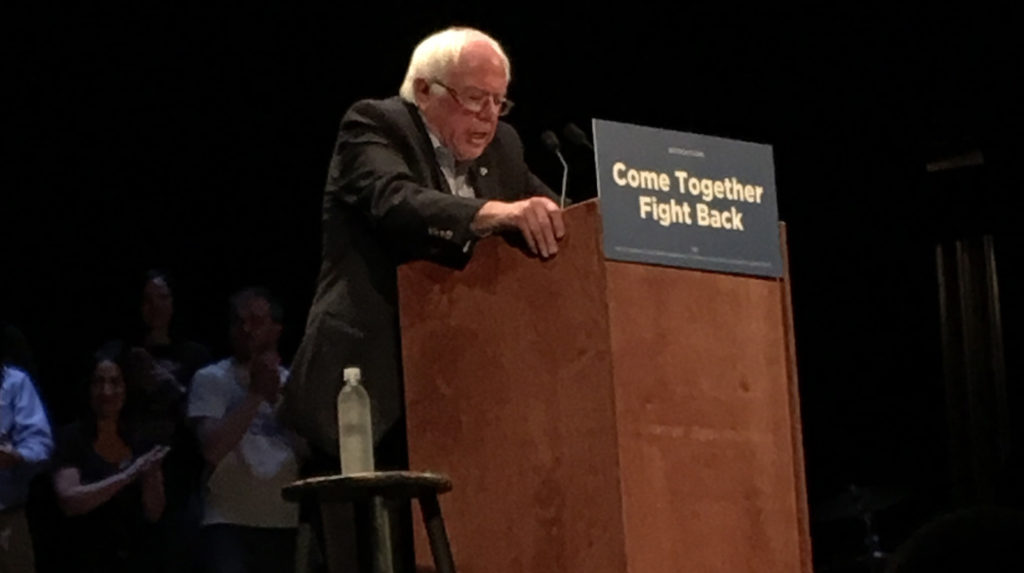 There is a rift in the Democratic party. On one side is the Hillary Clinton Machine, with it’s $1 million donors, voters frustrated by her loss in 2008, the politically rigid and those nostalgic for the ‘90s. On the other side is Bernie Sanders, with his donors who give $27 at a time and those who fervently believe he is squarely on the side of the working and middle classes.

So as an early supporter of Sanders and among the latter group, I was more than a bit surprised Tuesday night in Louisville to find that Bernie was teaming up with Democratic National Committee Chairman Tom Perez, who has been criticized for his establishment, big-money connections.

But as noted by Perez, “The Republicans have no purity test.” According to speakers that night, what that means for Democrats is: There can be no luxury of remaining divided in the day of a Donald Trump presidency.

And accordingly, the crowd that filled The Louisville Palace theater was diverse — a range of ages, backgrounds, and appearances. The people sitting next to me had traveled from Cincinnati and were fans of Sanders since before he declared his primary run. Both come from working-class families. For Emma, access to higher education is her primary concern, as she has two children in high school. For Charity, a nurse, the primary concern was healthcare. She said she has seen people die from lack of healthcare. “They don’t have the money, so they procrastinate. They never get the initial treatment they need, and then they end up dying.”

Another person I spoke to was state Rep. McKenzie Cantrell, a Democrat in Louisville and the youngest woman in the state House of Representatives. “I want to be part of what’s next for the Democratic Party,” she said.

Kentucky Democrats spoke first during the prelude to the Perez-Sanders speeches, touching on all the key issues. Standing out was Kyle Henderson, a pipe-fitter, union man from Paducah. Sharing his story of losing a father to a workplace accident, he predicted the Bevin administration’s hands-off approach to worker safety will lead to more children losing their father in coal mines, at construction sites, in factories. Former Lt. Gov. Crit Luallen was another standout, as she defended Kentucky’s version of the Affordable Care Act, which she said succeeded in “dropping the uninsured rate in Kentucky from 20 percent to 8.5,” Luallen lamented the destruction of the Kynect system that had worked so well.

Perez opened to a smattering of boos and catcalls from attendees, among them, John Hubbard, a local Native-American activist. “I love Bernie, but I’m mainly here to heckle Tom Perez because he’s a corporate tool.”

Despite such assessments, Perez’s speech paid homage to all the right points. He spoke of his Ford Escape, built in Louisville by union labor, and he noted that the Appalachian Regional Commission, or ARC, is on Trump’s hit list. Perez talked about how, when the Office of Management and Budget asked Trump why he wanted to ax the ARC, his response was simply that “he didn’t know what it did.” What it does is provide job retraining for coal miners who are finding themselves at a disadvantage in the economic primacy of cheaper natural gas. Perez explained how budgets are “moral documents” and that you can tell the values of a people by what they invest in.

And then the person of the evening, U.S. Sen. Bernie Sanders, who delivered what must become the mandate of the American left.

Opening with an homage to Woody Guthrie’s song “Which Side Are You On,” which was written about Kentucky coal company violence against unionizing workers, Sanders began what I call his American Sermon. “Are you ready for a radical concept? It’s called democracy!” he yelled.

He outlined the decline of the middle class over the past 30 years, saying that politics is about is “problem solving, not political ads and gossip,” a shot at the 24-hour news cycle that sensationalizes rather than informing.

Sanders also took shots at Bevin, Trump and the entire GOP. Sanders also spoke of the omnipresent corporate greed in the U.S., highlighting that the Walton family of Wal-Mart fame are actually “the nation’s largest welfare recipients,” because so many of their employees rely on government assistance due to the retailer’s poverty-level wages. The Walton family has more wealth than the bottom 42 percent of Americans, he said. “They’re ripping us off,” he boomed, detailing the crimes of a corporate power structure that has siphoned 52 percent of the productivity gains of the past quarter century to the top one percent of income earners.

Sanders spoke about healthcare, and of his elderly constituents in Vermont who must cut their pills in half while Big Pharma spends billions on television ads. “You don’t need a Ph.D in economics to understand that this is immoral,” and that this comes at a time when life expectancy in the U.S. is actually decreasing, he said. Also from his constituents’ experience Bernie spoke of one single mother who had to spend over $10,000 per year for a “decent” childcare provider, and that the rest of the civilized world guarantees paid family leave after a birth. “That’s not family values,” he said.

The show ended with a sing-along of another Woody Guthrie classic, “This Land Is Your Land,” with Sanders and others clapping in time. All in all, it was a great night for democracy but at the core remains the question — Is the DNC legit?

I did leave with a sense that in the day of Trump that we can wait until after Trump is gone to fight among ourselves, which we inevitably will. It’s The Bernie Show now, Dems. Forget that at your own peril.