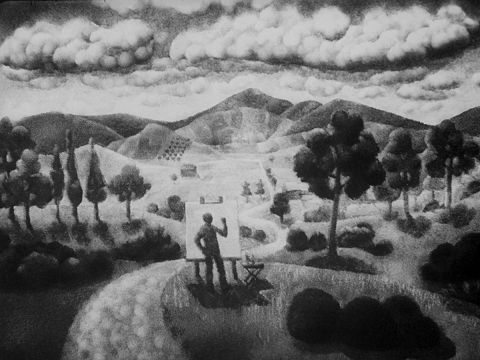 A still from the film "Mindscape."

GonzoFest Louisville 2017
Louisville Free Public Library Main Branch
$10 suggested donation  |  12-8 p.m.
Celebrate the legacy of Hunter S. Thompson, father of Gonzo journalism and the most famous writer from Louisville, at GonzoFest Louisville! This year’s festival aims to emphasize Thompson’s literary contributions through panel discussions, a lecture, movie and spoken word poetry. But it also will have food trucks, live music by a local bands and plenty of Gonzo vendors.—Staff

UofL Red-White Spring Game
Papa John’s Cardinal Stadium
Free  |  1 p.m.
While the season doesn’t start until September, this is your chance to see UofL’s 2017 football team in action… not to mention, Louisville’s first ever Heisman Trophy winner, Quarterback Lamar Jackson. Yep, the human highlight reel is back, and he will be attempting to become the second player in college football history to win two Heismans. Additionally, in the way-too-early, preseason rankings, UofL is a top-20 team, which means Lamar and Cards will once again be contending for a spot in the College Football Playoffs. —Aaron Yarmuth

Owsley Sundays at Speed
Speed Art Museum
Free  |  2 p.m.
Every Sunday at the Speed Art Museum is free, which is one sweet deal. And on top of that, Speed Cinema also has screens an art film for free on Sundays. This weekend, it’s a double feature of animated films by surrealist Jacques Drouin. First is “Mindscape,” a film about an artist who “steps through his canvas into a landscape governed by symbolism and artistry.” Then it’s “A Hunting Lesson,” a “visually stunning meditation on respect for nature and life.” —Staff