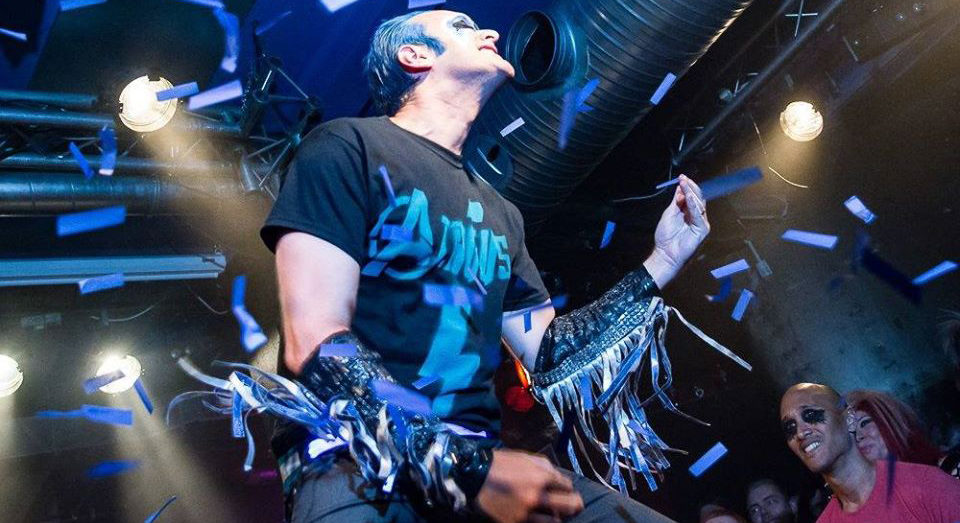 Last Friday, I opened my email, and there was a message from someone named Lt. Facemelter, who informed me that he was coming to Louisville and wanted to talk to me… about competitive air guitar.

Now, obviously, there is setup to this story, and some other great moments along the way, including a rad climax and the possibility of sequels, but it’s the moment of the first email that was the most surreal, and in some ways the most amazing.

This year, at Actors Theatre’s Humana Festival of New American Plays, I was set to write a review about “Airness,” a play by Chelsea Marcantel that dove deep into the world of competitive air guitar.

And holy shitballs, it’s a great play. It’s an immediate immersion-introduction to all things air guitar, with engaging characters and a good story. It talks about how serious the competitors take their art; how much the hardcore competitors travel to compete; how each competitor chooses a special air guitar competition name; and the deep and serious friendships that are forged around the art.

The play also talks about the titular quality of airness. That ineffable quality, much like the Tao. The only way to explain airness is to see “Airness”, or maybe achieve airness.

The play obviously has a ton of air guitar performance wrapped into it, even ending with an encore performance from Matt Burns, who is better known by his nom de guitaíre Airistole and is the 2016 World Champion of Air Guitar.

Because yes: there is a world championship. It happens every year in Oulu, Finland.

This play stuck in my gut. It was like an ax in my soul, and around its sharpened edges, something was escaping: the need to rock.

After air guitar-ing during my daily runs, and Googling air guitar competitions near Louisville, I dashed off a quick email to the US Air Guitar Championships “contact us” email address. My note was simple — I didn’t really expect a reply.

Opening my email account is, these days, about the most mundane thing I can do. But when one those emails was a greeting from someone named “Lt. Facemelter,” the mundane comes extraordinary.

“Sounds like someone just saw the ‘Airness’ play!” Facemelter began. I learned later he was a national champion. Praise Dio, I didn’t know at the time, or my face might have… exploded. He went on to say that he was on his way to Louisville to see the play and wondered if I was available to have lunch.

Of course I was available… to have lunch… with Lt. Facemelter.

A lunch date… with destiny?
We were set to meet at Royal’s Hot Chicken at 1pm. I got there early, but we foolishly had not established protocols for identifying each other.

So I stood nervously by the door, looking each customer who arrived in the eye, asking myself, “Is this person a Facemelter?”

We made contact and sat down. Facemelter is in his 30s and from San Diego. His real name is Jason Farnan, and by day he designs insulin pumps. We got acquainted and he introduced me to the friends he brought along.

This was the first confirmation of facts alluded to in the play. These guys had traveled from different coasts to hang out, and to immerse themselves in air guitar. So at lunch we were joined by Nikki Slaughter, Dag Nasty and Private Melter, the Lt.’s wife and partner in crime.

Later, in an on-the-record interview, Facemelter described the phenomenon. “Nationals is like a big summer camp. It’s a weekend full of people that most of us only see once a year,” said Facemelter. “And the time we spend with those people is so precious, because we really do inherently all get along. We all have this passion for the same thing that initially draws us together.”

Throughout the afternoon, other details, or ideas from the play, were confirmed in conversation. We talked about airness. We talked about legendary performances. We also talked about beer pong, movies with gross out humor and craft beer. But Facemelter was right — it felt like summer camp.

Early on, Facemelter invited me to return to Actors Theatre the next night to participate in a post-show round of Aireeokee, (which is exactly what it sounds like).

It never even occurred to me to say, “No.”  Air guitar just made sense to me, on some deep, emotional level that would take an extra thousand words just to attempt to explain.

My air guitar debut was set.

Facemelter experienced something similar with his first performance. He had seen the documentary “Air Guitar Nation,” and didn’t even hesitate. He immediately found a place to see air guitar performed.

“And, when I went to buy tickets to the show, I realized that for two more dollars, you could sign up and compete for yourself.” He said he recalls thinking, “Yeah, that sounds like something I need to do.”

For an extra $2, a man named Jason Farnan began his transformation into an (air) rock champion.

Rocked in 60 Seconds
Sunday night rolled around, and The Victor Jory Theatre filled up with people fast.

The audience members who stuck around were’t the only people there to shred. “Seeing the other cast members from other plays get involved with it, just showed a real sign of respect,” said Facemelter.

Cast members from shows, including “Now Pronounce You” and “Recent Alien Abductions,” had come to play or watch. “It just meant like, ‘You guys, we get why you do it. We get why it’s fun. We wanna have fun too. And we wanna do it in a way that  makes you understand how much we love it.”

I was actually second in the lineup. Before I knew it, I was onstage, with my finger pointed in the universal air guitar sign for “start the song.” For 60 seconds, I poured every molecule of my soul into The White Stripes’ “Fell in Love with a Girl.”

Of course, I didn’t achieve airness. But to paraphrase Lao-Tzu, the journey of a 1,000 miles starts with a single strum.

There’s way too much awesome for words. Lt. Facemelter showed why he was a champion, Nikki Slaughter killed us all, the cast of “Airness” performed completely different and astounding routines, and the entire cast of “I Now Pronounce You” made all future wedding music pointless with their metal air guitar Pachelbel’s “Canon in D.”

As the night burned down, there was one last song: “Free Bird.”

Every one, even the audience, was invited on stage to air jam together.

The Victor Jory stage was flooded with audience members, cast members and even some of the higher-ups at Actors Theatre, who generally stay out of the spotlight. On that floor, we were all equals in rock.

Nikki Slaughter climbed a stack of amps to rock on high, people faced off in mini, guitar show downs. People would momentarily drop their guitars and hug people they barely knew.

In America, every event ends with “Free Bird.” But at international events, the crowd comes together to jam to “Keep on Rockin’ in the Free World.”

The founders of Air Guitar, all those years ago, said the purpose of air guitar is to help find world peace. Maybe it sounds silly, or grandiose in the light of day, but not at night under the colored lights.

There are already plans in motion to bring more air guitar here. So with any luck, soon you can all keep on rockin’ in the Free City of Louisville.