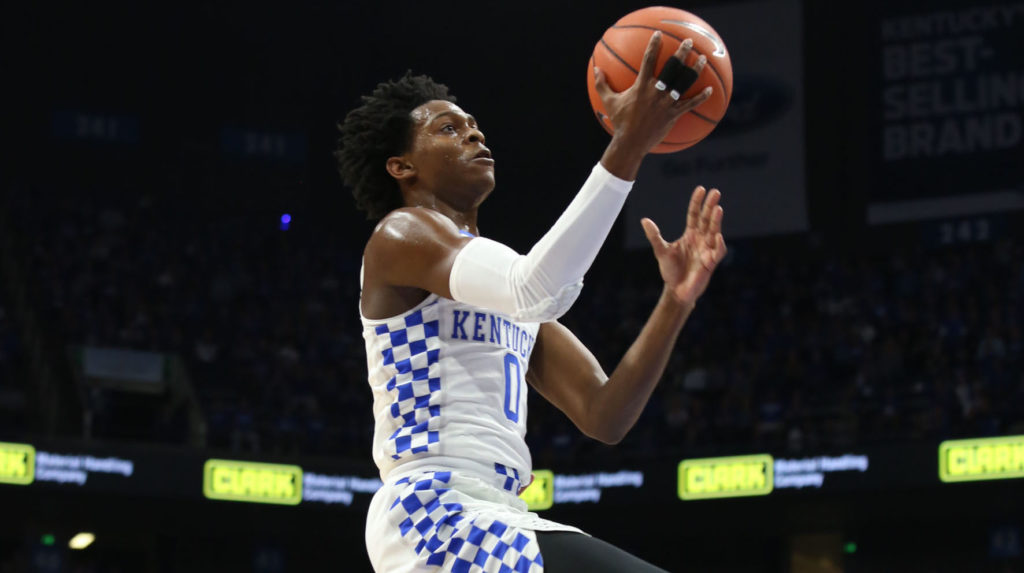 How’s Kentucky Gonna Do in the Tournament? Who knows?

There are two things we do know, every year, about the NCAA tournament:

1) John Calipari will complain about Kentucky’s seeding and bracket; and 2) he’s usually right.

I don’t think anyone thinks the Wildcats should have been higher than a two-seed. You can quibble all you want about whether Kansas and North Carolina should be one-seeds after neither won its conference tournament; or whether Gonzaga deserves to be a one-seed because of the conference in which it plays.

But, for me, the 23-5 Cats should feel validated to be tabbed the fifth-highest ranked team in the nation. Maybe, if you just look at the record, or at the 11-game winning streak, or at its run through the SEC tournament, it’s easy enough to think Kentucky deserves to be where it is.

Most of us, though — those of us who stay up for every 9 p.m. game on a Tuesday night in January, who listen to Cal whine at halftime to Kaylee Hartung, who dwell on every Isaiah Briscoe turnover and every Malik Monk miss — know that this team is an eyelash away from an early exit.

We know that when Monk has an off-night, and there have been more and more of those lately, this team has trouble scoring. We know that the interior defense has been soft. We know that Isaac Humphries is too slow, Wenyen Gabriel too thin, Mychal Mulder too short, to help Bam Adebayo out on the boards, or blocking out, or blocking shots.

Adebayo hasn’t gotten in foul trouble lately. But we also know how the refs like to test their brand new whistles once the post-season TV lights are at their brightest. And when Bam has to leave the game against UCLA or North Carolina or even Wichita State, it’s not like going out against Alabama or Georgia.

We also know that Kentucky has a propensity for falling behind early in the game. In the tournament, 17-7 deficits will not be that easy to overcome.

Also, there’s apparently a price to be paid for being the top-ranked second-seed. Let’s look at the other two-seeds, the ones who didn’t earn the “honor”:

While looming in Kentucky’s future is Wichita State, 30-4, a 10-seed that some people said was the eighth-best team in the country (and a team looking for revenge — remember when Kentucky ruined its undefeated season three years ago?); and then, immediately, UCLA, in the Sweet Sixteen, a UCLA team that already beat Kentucky. At Rupp.

How can UCLA be on the same three line as Florida State or Baylor?

Easy to see why Calipari is pissed.

Easy to see why more than the normal pessimism attends this year’s tournament for Big Blue Nation.

I have always been of the belief that brackets and seedings don’t matter. To be the last one standing in April, you have to beat whoever lines up across the court from you.

Upsets happen. (In case you haven’t already heard this, “these kids are not robots.”) Connecticut was a seven-seed when it won the 2014 championship, playing an eighth-seeded Kentucky team in the finals.

The one-seeds that year were — it doesn’t matter! Nobody remembers the one-seeds. They only remember the teams that make it to the Final Four.

So what does Kentucky have to do to become one of those four again?

1) Obviously, Monk can’t score two points. While 47 would be nice, he just has to more or less hit his average — making his threes, sure, but more than that driving to the basket, getting to the free throw line and making the other coaches have to substitute starters in foul trouble.

2) There is no faster, better-penetrating player in the country than De’Aaron Fox. If he drives within control, like he did in the SEC tournament, he creates intense mismatches for other teams’ defenses. And he draws fouls. (See above.)

3) The mantra all year has been “Get the ball in to Bam!” But that doesn’t mean forcing the ball inside and disrupting the offensive flow. Bam gets free when Monk is hitting from outside. Bam gets free when Fox is driving and drawing double-teams. For Kentucky, the alley-oop is not a novelty play for the ESPN highlight show. It is the ultimate extension of having such powerful guard play and such a dominating big man.

4) Kentucky needs to play its best on-ball defense of the season, forcing teams to fight the shot clock, keeping teams from driving the lane and keeping teams from easy passes inside. That will help keep Bam out of foul trouble. Briscoe and Dominique Hawkins are both outstanding on-ball defenders. But Briscoe is foul-prone; Hawkins less so.

I’m not the first to say it: Dominique Hawkins could be the key to the whole thing.

Or the Cats could go home the first weekend. Such is the uncertainty of this year’s team.