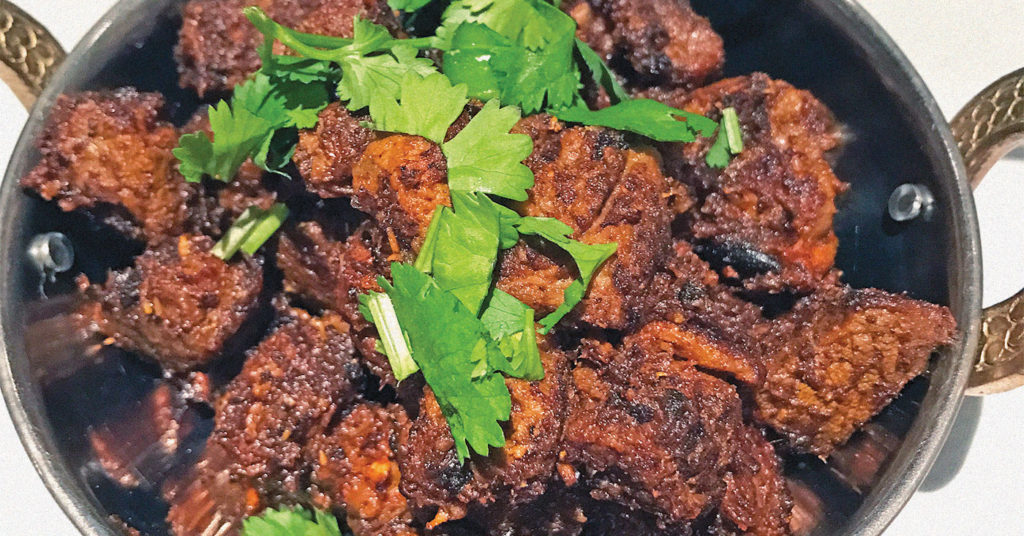 I’m pretty sure I have told you before that I love Indian food. Why do I love it? Let me count the ways: It brings bold, bright flavors that may be as fiery as the gates of hell, or as mild as a baby’s kiss, whichever way you like it.

Indian fare draws on a remarkable range of ingredients. It is one of the few culinary traditions that treats carnivores and veggie-vores equally well, offering a vast selection of flavors both meatful and meat-free. Indian chefs are good with rice, but they’re also great hands with bread, particularly delicious flatbreads seared in a fiery tandoori oven. And did I mention those bold, intense aromas that rise from each dish with the sinuous beauty of a snake-charmer’s tune? I think I did.

So, I was sad to hear of the recent closing of Shandaar, a very good Indian eatery that may have struggled to reach critical mass in the far East End. But when one door closes, another opens, so I now celebrate — and highly recommend — Tikka House, recently arrived in the quarters that had long housed Majid’s.

Since the closing of Sitar in The Highlands a few years ago, the metro has been struggling to hold its Indian restaurant census to 10, although this is a far cry from the days when we had to struggle to keep one, and local Indian-food lovers were forced to trek to Cincinnati for a fix during the periods of drought. By any measure, Tikka House’s arrival is doubly welcome since there’s been none in close reach for denizens of the Frankfort Avenue corridor from Clifton to St. Matthews.

Situated in the dining-room side of the old Majid’s — the bar section has given way to a substantial expansion of Paul’s Fruit Market next door — Tikka House has settled in without obvious change beyond Indian tchotchkes, but that’s fine, as casual elegance and white tablecloths, quality flatware and china work just as well for upscale Indian as they did for upscale Persian fare.

Restaurateurs Shree Giri and Manish Shrestha, who say they boast nearly two decades of experience in “five-star restaurant dining,” offer an extensive menu of Indian dishes that represent most corners of the subcontinent, from the Himalayas and the arid North Indian Punjab through India’s teeming cities to its tropical southern climes.

Then, come back at dinner to sample a serious Indian repast, with more than 60 main-dish options available, attractively priced from $9.99 (for several vegetarian dishes) to $16.99 (for tandoori shrimp kabab or a tandoori lamb chop). About 20 starters, soups and salads range from $3.99 (for veggie pakora turnovers) to $8.99 (for many options). You can sample from an intriguing selection of flatbreads and other Indian breads from $1.99 to $3.49.

In lieu of the thin, crisp pappadum lentil wafers that many Indian restaurants offer as a complimentary starter snack, Tikka House leads with tiny, diamond-shaped fried pastry bits, addictive but a little too small for practical dipping in the pale green mint chutney and sweet, dark-brown tamarind chutney provided.

Two shared main dishes were both so good that we’ll be torn on future visits between enjoying them again and trying something new.

Roast lamb with coconut ($13.99) offered a delightful variation on the commonplace Indian dish consisting of bits of meat (that’s what tikka means, by the way) in a spicy sauce. This was a dry curry instead, bite-size cubes of flavorful, tender lamb deeply scented with a spicy dry rub that included a subtle touch of coconut and a delicious, elusive blend of spicy flavors that sang like a flavor orchestra.

Subtle, complex and harmonious spicing also elevated daal makhani ($9.99), a hearty Punjabi dish of black lentils and kidney beans. Served in an amusing, little metal bucket, this was a filling dish of meatless protein, tender, flavor-loaded legumes swimming in a thick, savory sauce. A side of garlic naan ($2.99) was so fresh and good — you could call Tikka House the Blue Dog of Indian bread — that I used it in favor of the otherwise fine steamed rice to scoop up every last bit of the food.

With spice-taming tumblers of rich, salty yogurt lassi ($2.49) and a dessert of ras malai ($3.49), a subtle dairy treat, dinner for two was a very reasonable $43.42, and I recognized the server’s hustle under challenging conditions and bumped the tip up to $10.