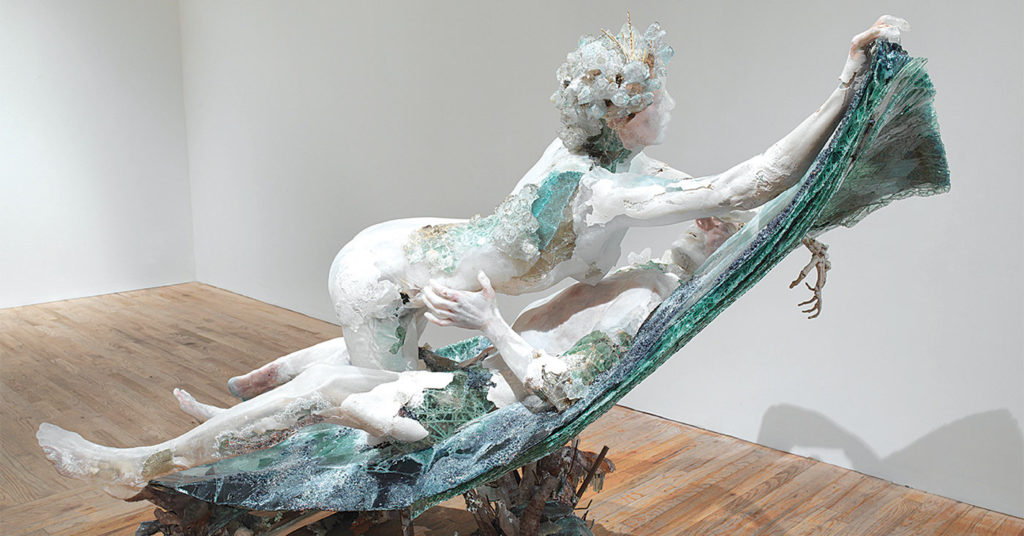 In this time of pussy hats and women’s marches, there’s a local art exhibition on women, by women. “The Future is Female,” a slogan first used in the 1970s, reminds us we still do not have equality. A lot of advancements, to be sure, but in the Trumpverse, all bets are now off.

Modern life reminds us an art show with a ‘70s title is still timely. The fact sheet from the Guerrilla Girls, a group of artists and art professionals fighting discrimination, is illuminating: 51 percent of visual artists today are women. But of the 590 major exhibitions by nearly 70 institutions in the U.S. from 2007–2013, only 27 percent were devoted to women artists. Though women earn half of the masters of fine arts degrees granted in the U.S., only 30 percent of artists represented by commercial galleries are women.

“The Future is Female” was organized by museum director Alice Gray Stites to celebrate the 10th anniversary of Louisville’s 21c Museum Hotel. This contemporary feminist art, part of the Third Wave of feminism, was gleaned from the museum’s permanent collection and is as varied as the females who created it. The First Wave worked to get the vote at the beginning of the 20th century, and the Second Wave of the ‘60s and ‘70s was also known as Women’s Liberation.

The centerpiece of the exhibition is, rightly, one of the first works you see upon entering the museum. And it’s a bit of a puzzle. At quick glance, Monica Cook’s “Phosphene” appears to be a couple having sex. But look past the life-size figures to the glass layers resembling a car’s windshield. It’s a sculpture of living and decomposing, air and water, life and death.

“I am afraid.” Those woeful words are the title of a photograph by Jenny Holzer. She wrote a poem when her daughter was born (“I am afraid of the ones in power, who kill people and do not admit grief.”) that she later projected on the side of a building in Berlin. The photograph is a record of that event.

If you have ever wondered where acrylic nails go to die, art can give you an answer. Frances Goodman used thousands of nails to create “Medusa” as a scaly, multi-tentacled sculpture. While it will not turn viewers to stone, it does beg you to get closer to examine its structure.

Gone are the days of a dropped handkerchief. Stites said, “Goodman utilized thousands of the acrylic nails designed for use as bodily decoration after she heard a dropped fake nail described as the ultimate female calling card — a weapon of seduction.”

E.V. Day’s “Waterlily” references two art masters. As an artist-in-resident at The Claude Monet Foundation in France, she collected petals from the Giverny gardens. After rearranging the flowers, Day photographed them 18 times the original size, resulting in an homage to Georgia O’Keeffe’s paintings of enlarged blooms.

Lining the hallway are additional works, including Sanell Aggenbach’s “Rumours.” The photograph of a woman covering her face becomes a three-dimensional relief with the addition of gold threads of tears. This will be what grief looks like to me from now on.

“Supply and Demand” by Kathleen McQuade Olliges will have every nursing mother wonder if that’s what she looks like. Olliges covered a mannequin with baby bottle nipples representing a woman’s duty to, both actually and metaphorically, satisfy the hunger of the people around her. Food for thought (pun intended).