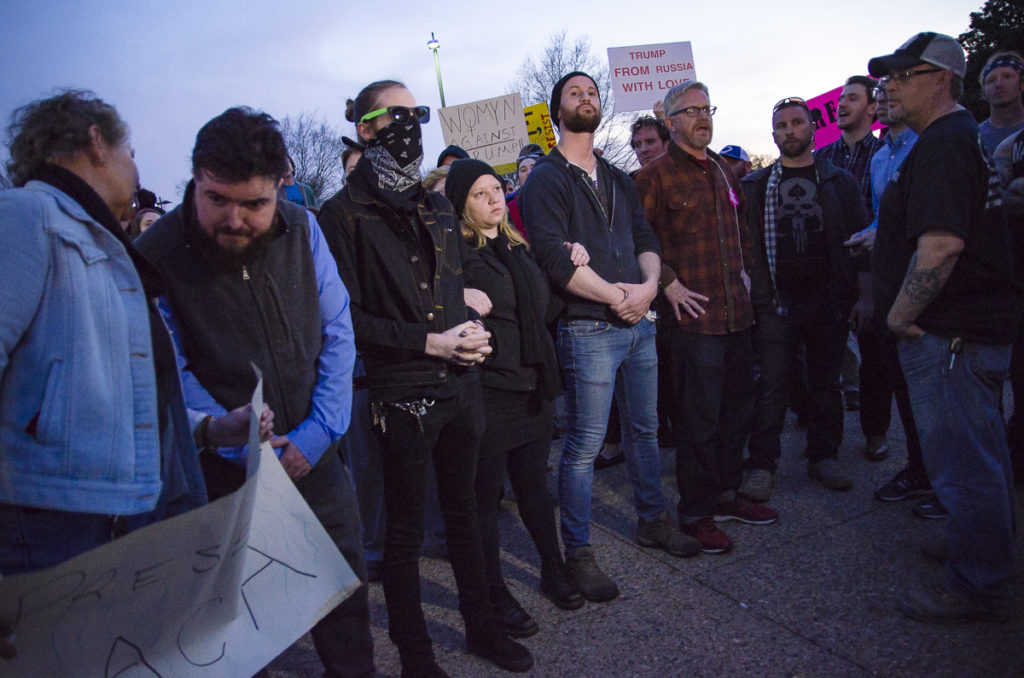 Two hours before Donald Trump was scheduled to speak at Freedom Hall, a group of about five protestors, dissatisfied with how far the designated free speech area was from the event, moved to a corner about 100 feet closer to the sea of red hats waiting in line to get inside. When an officer tried to usher them back to the free speech zone — a fenced-in area that held hundreds of protesters — they all agreed to go back, except Katina Cummings. Three more patrolmen arrived, eventually persuading her to leave, but she said she would return — and she did. That then turned in a 20 minute argument. The officers kept telling her it wasn’t worth getting arrested, and she eventually agreed, but later telling me she left only because getting arrested by herself wouldn’t have been a big enough statement.

“I think it’s really repulsive and disgusting that they’ve penned up people away from the event,” Cummings, 60, from Louisville, said. “Part of Trump’s strategy is to keep protesters away, and to make sure that only the ones that support him get inside. I don’t want to be cooped up like a chicken in this fenced area, where we are not even close to where the speech takes place.”

Shorty after we finished speaking, I lost her in the crowd, but I imagine she was satisfied when, a few hours later and shortly before Trump’s speech finished, about 100 protesters subtly made their way past police toward the entrance of Freedom Hall, where they gathered to chant and hold signs as supporters poured out of the building after the rally.

The designated protest area, which started at the corner of the Phillips Lane entry, pinned the protesters to the back edge of the grounds, in a grassy area with boundaries that could get them only approximately as close to the arena as the parking kiosks.

“The turnout’s been awesome,” said Donny Greene, of Indivisible Kentucky, part of the Louisville Movement Coalition, which organized the protest, along with Black Lives Matter, Louisville Showing Up for Racial Justice and others. “We’ve had a great crowd out here today. We’ve had great speakers. It’s been a good day. It’s funny to call such a sad event a good day, but that’s what it is — it’s a unifying event that creates resistance against the oppression that’s occurring.”

While he certainly seemed proud of what was happening inside the fence, Greene, like Cummings, was disappointed by how the protesters were funneled to the edge.

“They didn’t have a designated free-speech zone that any of us were aware of until a quarter to three today,” Greene said. “So, we were completely unaware that it existed. We were all inside, and we were swept out of the parking lot, and told it was a private event. We were actually set up in front of Kentucky Kingdom, and had people here to protest peacefully, not violently, and we were forced to move over here. We were not given the choice.”

Inside the free speech zone, there was an abundance of straightforward chants (“Love your neighbor, no exceptions,” “White silence is violence”), witty and serious signs (“You’re killing me smalls,” with a photo of Trump holding up his hands, “Threat level orange,” “Compassion over cowardice”) and fiery speakers talking about the dangers of healthcare overhaul and hatred.

“I’m an avid protester,” Stan Mtangi, 55, a Louisvillian and naturalized citizen. “This man has gotten to where he is by taking every crooked way he can. He doesn’t release his taxes, so we won’t know his affiliation with Russian oligarchs funding his operation, and financing his businesses.”

When Air Force One flew over the protest, the speaker stopped speaking, the chanters stopped chanting— everyone instead took the opportunity to boo.

The sea of red hats that marked the line to enter started at the entrance of Freedom Hall and wrapped all the way around the entire Kentucky Exposition Center, but there was one person who immediately caught my eye.

“Are you from Kentucky? Are you from around here?” I asked Rob Cortis, owner of the Trump Unity Bridge, a parade-style float parked in the line, which was, at the time, blasting “Funky Town.”

“I am from around here,” he responded. “I’m from America … I’m from Detroit, Michigan.”

I assumed, between our opening interaction and introducing myself as a writer at the local weekly, that this conversation was going to go downhill quickly, but Cortis actually ended up talking to me for almost 20 minutes — about immigration, healthcare, protesters, free speech, taking the Unity Bridge all across the United States in an attempt to find common ground between two very polarized sides.

He’s a diehard Trump supporter — I mean, he follows the president around the country in a flatbed trailer carrying a Harley Davidson, a bridge and a backdrop with signs — but he said his goal is to find out what the issues and concerns of the other side are, and add aspects of that to his bridge.

“Over the 17,000 mile journey we have been on, we have met with people of all shapes and sizes, with immigrants, tall, short, all colors, and we took their messages, so that President Trump can see them,” Cortis said. “When we were at the march, the day after the inauguration, we were surrounded and stopped by the Women’s March, who started chanting. I got on the microphone and asked them to read the signs, and a woman came up to me and said the signs were peaceful and, she said there was no sign for them, and they gave us healthcare and equality to add to the bridge.”

After he finished his story, he opened his truck door and pulled out a pink hat, telling me that the protesters at the Women’s March gave it to him, and that sometimes he wears it when he gives speeches on the Unity Bridge. I asked him what other Trump supporters do when that happens. He said some of them boo, but then he puts his Make America Great Again hat on over it to symbolize togetherness, in an attempt to further his message.

In the middle of our conversation about immigration, with Madonna blasting over his floats speakers, a women in Trump gear walked up and cut off our conversation: “You know Madonna’s a Trump hater, right? Why are you playing her song, man? Turn it off. She said she would burn down the White House. Turn it off.”

After he switched the song, I asked what he thought of value of free speech in a situation like Madonna’s, where, during the Jan. 21 Women’s March in D.C. the pop star said, “Yes, I’m angry. Yes, I am outraged. Yes, I have thought an awful lot about blowing up the White House. But I know that this won’t change anything. We cannot fall into despair.”

Cortis said that the comment would have landed the average person in jail.

“Say what you want, threatening the integrity and safety of America, instilling violence amongst women and people in the crowd — that’s inciting a riot —saying it to thousands and thousands of people there,” he said. “A lot of those speeches do.”

It was hard to ignore the irony when you consider Madonna’s full quote, Trump’s words and actions in regards to women, as well as the violent crowd outbreaks that were incited by his comments the last time he came to Louisville.

Bringing it all back to the entrance

After Katina Cummings and the police debated about standing with a sign on the sidewalk, eight officers stood at the far edge of the protest, speaking with everyone who passed into the parking lot.

They asked each person whether he or she was leaving, letting people go through who said yes, telling people who answered no to go back into the designated area. It was a really easy, innocuous interaction, but some of the some of the protesters made their way to the entrance of Freedom Hall to meet the supporters as they left.

“If you like to chant and be loud move to the front,” a man in a Bernie shirt yelled around 7:30 p.m., which was quickly followed with competing Black Lives Matter vs Blue Lives Matter chants. As the crowd came alive, the police formed a semicircle and moved people back from the street, creating a gap between the protesters and the Hall’s exit.

Although the majority was protesters, there was a small group of Trump-backing counter-protesters off to the side, trying to yell insults over the chants.

“Fascists, Racists, murderers,” Aaron Brown, 32, a Trump supporter from Hillsboro, Ohio, yelled at the protestors. When I later asked him why, he said it was a combination of all the things that they associated with his side of the political spectrum.

“I wanted to get my voice heard, because they call [us] racist,” he said. “I believe the more and more we go down this route, everybody’s in gridlock and it’s not going to accomplish anything.”

The sides remained relatively separated, with a few yelling matches and a few heart-to-hearts, but I didn’t see anything even resembling a shoving match. At around 8:15 p.m., three Trump supporters were pulled aside by a cop after squaring up to protesters, seemingly with no intention other than to cause problems. They headed toward the parking lot right after their conversation with the officer, which appeared to be an instruction.

Black Lives Matter seemed to be the heartbeat of the Freedom Hall entrance protest, as members of the organization led the crowd with chants like “No Trump, No KKK, no fascist USA.”

“We’re here to stand up for the voices of the unheard, because nobody is doing it, and they’re dying in huge amounts,” Christian Jones, a member of Black Lives Matter, said.