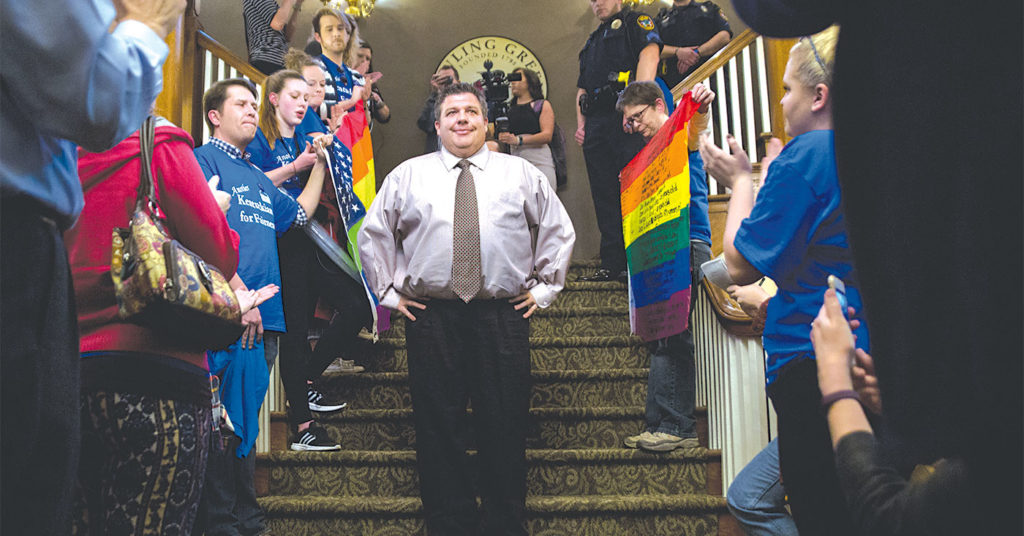 City Commisioner Brian "Slim" Nash in applauded at Bowling Green City Hall. "All I'm trying to do is ensure civil rights for all people," he said. Photo by Kathryn Ziesig/HERALD

After years of activism and urging for Bowling Green to at least discuss the idea of a Fairness ordinance, the city at last had the opportunity to pass one Feb. 21, giving civil rights protections to LGBT people. Unfortunately, the ordinance failed to even get a discussion, let alone a vote. But the March 7 City Commission Meeting and Work Session in Bowling Green could see a different outcome. To better understand this situation — and why Bowling Green is the last Kentucky city of its size not to have a Fairness ordinance — we spoke with Fairness Campaign Director Chris Hartman.

Modern: What is a Fairness ordinance?

What is the history of the ordinance in Bowling Green? How long has this been in the works?

How did it finally seem to at last be getting legs?

In the 2016 Bowling Green City Commission election, an LGBT Fairness ordinance became one of the top topics of conversation at candidate forums and in local media. Near the end of the race, candidate and former City Commissioner Brian ‘Slim’ Nash publicly declared his support for Fairness. After winning, he vowed to introduce the Fairness ordinance within his first 60 days — a promise he kept last Tuesday, Feb. 21, when he became the first sitting Bowling Green City Commissioner to propose LGBT Fairness.

What prevented it from advancing?

Commissioner Nash’s motion was met with predicted silence. Not one of the three other commissioners nor the mayor would second the motion to discuss LGBT rights in Bowling Green — continuing their longstanding tradition of ignoring constituent conversation and concerns. In a procedural move, Commissioner Nash had the Fairness ordinance placed on a City Commission Work Session agenda for Tuesday, March 7, when Commissioner Nash may try to force a conversation on the issue. In a dramatic scene following the meeting, hundreds of Bowling Green Fairness supporters lining the small city hall foyer and staircase began loudly chanting ‘Shame! Shame! Shame!’ as Mayor [Bruce] Wilkerson and Commissioner Joe Denning exited the premises. Commissioners Sue Parrigin and Rick Williams both weaseled out the back door to avoid constituents. Within minutes, jeers turned to jubilant cheers as Commissioner Nash appeared at the stair’s landing, where he was greeted by a throng of, ‘Thank you, Slim! Thank you, Slim!’

What’s the next step? Any particular strategy?

Bowling Green Fairness supporters are currently organizing for the March 7 City Commission Meeting and Work Session at 4:30 p.m. CST. They’ll once again show their resounding support and will likely be ignored by the vast majority of the commission. The issue won’t go away, no matter how long the mayor and commissioners ignore it. Slim could be the first in a wave of new city leaders who will move Bowling Green forward despite resistance. Local leaders won’t stop attending city commission meetings, where they’ll continue to bring forward the facts about LGBT Fairness and its benefits, like Midway’s 100-percent job-growth rate since its passage of a Fairness ordinance in 2015. They’ll also organize in the 2018 Election, likely endorsing local candidates like Commissioner Nash who take a stand for Fairness.

What’s the story been in other cities of this size? What led to their ordinances passing?

Unfortunately, Bowling Green remains Kentucky’s largest city without a LGBT Fairness ordinance. Owensboro, which is nearly identical in size, had a robust conversation around Fairness in 2014, but progress halted abruptly due to city leaders’ cold feet. Interestingly, we’ve seen easier progress in smaller towns, where the issue of LGBT discrimination protections doesn’t seem to be a big deal. Morehead passed its 2013 ordinance unanimously and with such little fanfare that supporters in the room didn’t even realize it’d happened. Danville and Midway saw similar, brief discussion and quick passage of the issue sans controversy. Essentially, much of our movements’ successes or failures seems to be the luck of the draw of city leaders.

What can readers do to support the advancement of the Bowling Green and other Fairness ordinances?

Stay engaged with what’s happening. The political tide locally and statewide can turn on a dime. We’ll keep folks up to date on the Fairness Campaign’s Facebook page and @FairnessCamp. If you have friends in Bowling Green, or any city without a Fairness ordinance, please spread the word and ask them to join the movement. As with any nonprofit, you can donate your time, talent and treasure. The Fairness Campaign is hosting weekly volunteer nights with free pizza at our office on Frankfort Avenue — check the Facebook page for upcoming events or e-mail [email protected] to volunteer any day of the week! Finally, one of the best ways to help is to contribute any amount to the Fairness Campaign at fairness.org — it’s tax deductible and helps us keep the lights on! •