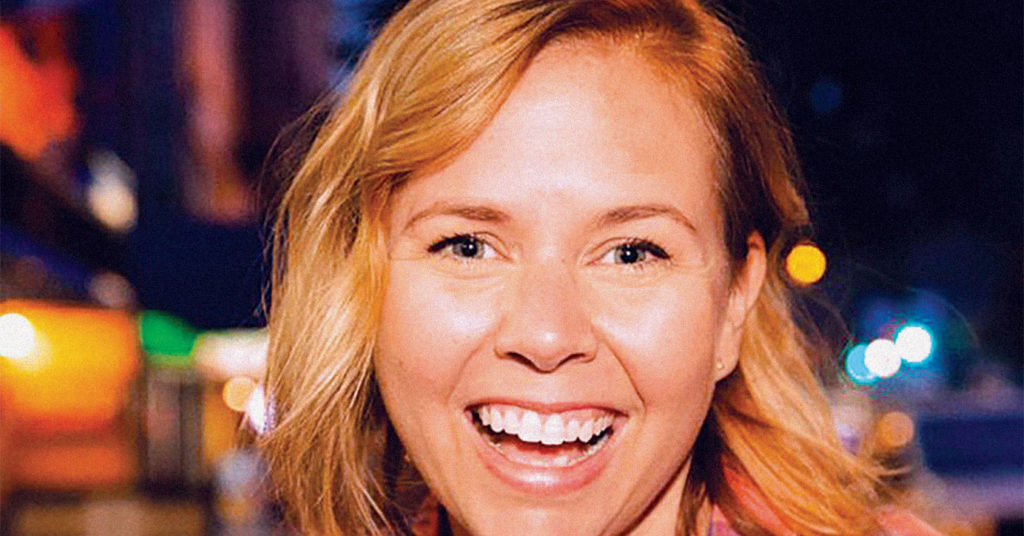 At first glance, Sally Brooks has the disarming familiarity of your elementary school librarian. It doesn’t take long before you realize this is one smart-ass, antagonistic librarian. After college, she spent five months hiking the Appalachian Trail, where she met her husband. She worked briefly as an attorney (a career she hated), and eventually took up comedy after enrolling in a class for beginners. The web took notice of her when Brooks’ alter-ego “Suzy Jenkins” went viral. As Jenkins, she released a series of hip-hop tracks about being the most-hardcore housewife of all time. A year ago, Brooks’ life took another turn, when she became a mother for the first time. While on family vacation in Florida, Brooks paused to talk with us about her life and personal journey through comedy.

Sally Brooks: I kind of grew up all over. My father was in the Air Force, so we would end up moving every couple of years. We lived in The Philippines for a while, which was really cool. We ended up in Dayton, Ohio, at the Air Force base there. So that’s where I went to high school and graduated from.

Was comedy something you were interested in doing, while you were getting shuffled across the globe as a kid?

No. I was pretty shy. I was really into theater, so my mom put me in that, doing more traditional plays and things. But I always loved stand up. David Letterman was my hero. And I had this tape called ‘Ladies of the Night,’ which is such an awful title, but it was one of the first comedy specials that featured all women on Showtime. It was introducing Ellen DeGeneres and Rita Rudner, and I loved it. It wasn’t until after college I moved to Chicago and didn’t know anyone, so I thought about taking an acting class. That’s when I saw someone was giving a stand-up class. I opted for that instead, and that was it — I was in love, and my life was ruined.

After that you hiked the Appalachian Trail. What inspired you to do that?

My best friend from growing up, her sister, and I — the year after we graduated from college — did the Long Trail. The Long Trail is a short trail in Vermont … Hiking was totally their thing, I was just along for the ride. After that I thought: ‘I don’t think I ever want to do that again — that was hard.’ Then, we started talking. I was about to leave Chicago and go to law school. She was about to go to medical school. We both had a little money saved — and it was the best thing I’ve ever done. It was something I never thought I would want to do.

More recently, how do you feel like becoming a parent has changed you?

I’m certainly more tired. It has made me prioritize my time more, become more efficient. I also treasure my weekends when I’m away a lot more. It has me mining my experiences, trying to appreciate things that happen, which might not seem funny at the time, but works into my material.

You recently relocated to New York. They have such a brash, hard edged style of comedy there, do you see that rubbing off on you?

I think New York has helped me take more risks. I was on the road 45 weeks a year before I moved there. When you’re on the road, your sense of humor has to be ready for everyone everywhere, all of the time. In New York, you can be a little more subtle and you can take more risks. But the one thing that I love about being on the road is that, in New York, the audiences are really young. They don’t always connect with the struggles of being a new parent. In the Midwest, they get that.

You describe yourself as a ‘smart-ass.’ Has New York enhanced that particular trait?

I would say it’s humbled me. Becoming a parent has made me much more of a smart-ass, though.

It’s one of those ‘if you don’t laugh, you’ll cry’ things. If I’m not making fun of myself and laughing, I don’t know if I’d make it. I walk out of the house most of the time with snot on my jeans. There’s no way I can take myself, or anyone else, seriously. I also have a lot less patience for people who are self-centered, so I get a little snippy with them. That’s definitely from being a parent — not New York.