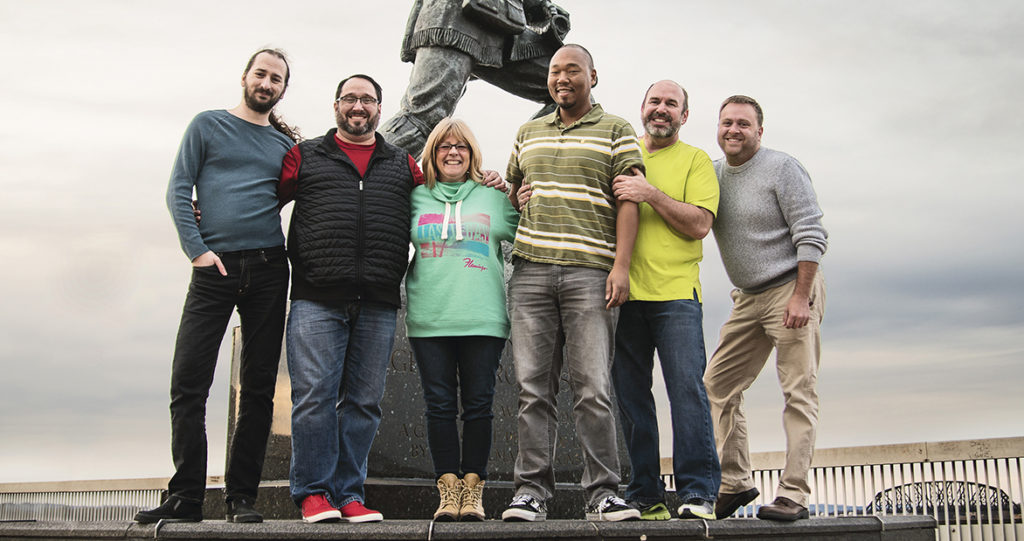 The dictionary defines pride as, “a becoming or dignified sense of what is due to oneself or one’s position or character; self-respect; self-esteem,” and “pleasure or satisfaction taken in something done by or belonging to oneself or believed to reflect credit upon oneself.”

Both of these definitions capture the essence of the varied gatherings of the highly diverse LGBTQ population for festivals known collectively as “pride.” Pride festivals feature a series of events that include parades, beer gardens, vendor booths, music and fellowship. Speeches and posters, cheers and jeers, laughing and crying prevail. Emotions are high as participants join in for the first time or come back for the 10th time to make new friends and greet the old.

New festivals are popping up all over, like Louisville Pride and Jeffersonville Pride, but the road was paved before them by the granddad of the family: Kentuckiana Pride Festival. KPF developed as a result of the work of many after a number of independent conclaves blazed the trail for an aggregate jubilee.

The 1982 Louisville Gay Pride Picnic at Otter Creek Park drew about 100 people according to activist Ken Herndon, who remembers thinking, “Well, if it’s called ‘pride,’ why is it 45 miles out of town?” The truth was, in those days, people were afraid they’d be outed to families and employers who knew nothing of their sexual orientation, so they erred on the side of caution.

Herndon took over organization of the picnic, moved it from Otter Creek to the Louisville Water Tower and added a slew of other events in the days leading up to the picnic, taking the first steps toward a true “Pride Week.” The only caveat? Media wasn’t allowed into the private party that first year, says Herndon, who explained to the press the fear of discrimination and untoward consequences of being seen in same-sex company. The renewed event was a success, clearing several thousand dollars that first year, which they banked to fund the next year’s activities. Herndon had more plans for the festival. Big plans.

Another landmark was 1987’s first gay March for Justice. One of the creators of the March, Carla Wallace, shares, “The struggle to expand equality for LGBTQ people and how it connects to racial justice, gender and worker justice came out of the March for Justice and later, the Fairness Campaign. These efforts helped create the possibility of ever-expanding festivals that center on LGBT pride, and that includes ALL of us.”

From the Kentucky Fairness Coalition website: “Just over 50 years ago, Kentucky became the civil rights leader in the South when it passed the 1960 Human Rights Act. Since then, cities like Lexington, Louisville and Covington have all worked tirelessly to honor this legacy by enacting fairness ordinances – laws that ensure everyone in our commonwealth has equal protection. Finally, in 2000, there were laws on the books protecting gay Louisvillians from discrimination in employment.”

June 2001 brought to light a newer, fuller-figured Kentuckiana Pride Festival. The function had finally slipped up the river to the Belvedere, where it remains entrenched today between the skyscrapers, with fountains in which to frolic and a beautiful view of the Ohio River. T-shirts were sold, and the next few years revealed an increasing number of vendors and a growing crowd of gay and straight attendees. A parade blossomed in 2004, and in 2008, KPF was incorporated.

Rodney Coffman, president of KPF is entering his third year in the position and looks forward to the festival’s continued development. “When I took over as the director, my goal was to grow the festival and our community involvement and re-brand the image,” he relates. “I feel if you invest some way, some how in something it always pays you back in some fashion. With that mindset, the goal was to see how we could be more involved. In doing so, it’s paying back. We have seen an increase with individuals wanting to be involved. Membership is growing. This is important to the brand, growth and future of Kentuckiana Pride. New minds, new ideas.”

As LGBTQ equality continued to become more mainstream, the festival too grew in popularity. Fairness Campaign Director Chris Hartman describes 2015, Coffman’s first as director, as “the pride that wouldn’t end” due to the anticipation of the Supreme Court of the United States’ soon-to-be ruling on marriage equality. Pride was extraordinary that year. But it took a tragedy of major proportions to inspire the record-breaking parade of 2016.

At 2:02 a.m. on Sunday, June 12, 2016, an angry and hateful 29-year-old man gained entry to a popular gay Orlando nightclub, massacring 49 and injuring 53 more. The shooter died in the melee, and Pulse became the site of the deadliest terrorist attack on American soil since September 11. “It was a pivotal moment in the LGBT community and allied relationships. Allies had to step up and defend their fellow citizens,” says Hartman.

Only 18 hours later, an enormous throng from both sides of the river collected to memorialize the Pulse victims on the Big Four Bridge. It was quickly and effectively organized by Fairness and Jeffersonville Pride. Barely a week later, the 2016 Kentuckiana Pride Festival drew unprecedented thousands, the largest crowd organizers had ever seen.

Mayor Greg Fischer led the charge through the streets of the city, and sidewalks were filled three-deep along the parade route, cheering the marchers. A hearse covered by an iconic rainbow flag moved slowly ahead of 49 angel-winged escorts, each signifying a loss of life. Subsequent parade units ranged from decorated floats to strollers, with families stepping alongside city employees and corporations showing their support of equal rights for all.

More pride festivals are developing in the wake of KPF’s sensational success, and organizers all seem to be on the same page. Hartman asserts, “The number of prides in Kentucky doubled this past year, adding Madisonville, Georgetown, Owensboro…looks like there’s going to be a capital pride in Frankfort this year.”

Meanwhile, the Louisville Pride Festival, which officially began in 2015 and is now annually held on Bardstown Road in the Highlands, asserts that it  “promotes Louisville as one community that celebrates diversity, fosters inclusion for all and embraces the LGBTQA community.” Thomas Carrier, founder of LPF, is proud of his first pride. How did a meeting with KPF’s Coffman play out? Carrier told Modern in August 2016, “From the very beginning, it was our intention to work in tandem with Kentuckiana Pride. I believed it was the only way to provide the best opportunity for us to get the message and meaning of pride to as many people as possible.”

Both Carrier and Coffman recall standing united from the first moment, and the results showed in great attendance at the inaugural Highlands celebration. Posted reviews were overwhelmingly positive, including expressions of gratitude for “holding [LPF] in the center of the gay community in Louisville,” and, “Can’t wait until the second year and all it will hold.” A parade was apparently “all that was lacking” in one man’s opinion, but overall, it was rated a “smashing success!”

Jeffersonville, Indiana, followed suit. Teenager Evan Stoner was motivated to create a “Sunny Side of Louisville” pride festival after experiencing bullying at school. As a guest on my radio show at WCHQ 100.9 FM last summer and again when interviewed for this story, Stoner said, “Jeffersonville Pride believes that our community diversity is our greatest strength. We’re on a mission to build a prouder, stronger, better community for everyone.” The excitement in his voice is palpable. “We were thrilled to see our community come together as one and welcome their first pride with open arms.” Coffman described the meeting with leaders from both Jeffersonville Pride and Louisville Pride as “very friendly, productive and fruitful. … We gave them a lot of our resources and they really did a great job!”

As far as the future of Kentuckiana Pride is concerned, Coffman and the current board are not only optimistic about KPF’s continued success but also encouraged that its presence in the community is perhaps more vital now than ever. “As I start my third year in this position, I can say the festival has grown in attendance and vendor and community involvement; I hope to see this continue, especially now with all the challenges the LGBTQ community is facing under the new leadership of our country,” he says. “Each year, we will try new things or do things a little differently to see what works and what doesn’t. This year will be no different. … One of our goals is that some day we hope to outgrow the Belvedere, forcing us to move to a larger area. We have looked at possible new locations for the future. One way to help achieve this is to get more individuals wanting to see the growth by volunteering, joining our committee and/or sharing their great ideas. Corporate sponsorship is key to any nonprofit organization. The growth of the Kentuckiana Pride Parade, Festival and Foundation continues to evolve and has endless possibilities. I personally want to thank the community for supporting us in the past, today and in the future.”

Hartman agrees. The original festival “has gotten bigger and better each year,” he affirms. “I really think it’s due to the cultural step of greater LGBTQ acceptance in America. KPF has absorbed the increased volume of attendees each year without necessarily increasing their capacity.” Herndon echoes that sentiment, encouraging new “baby prides” to “keep it public. Go to the city hall and police department and partner with them. Don’t be afraid to think big!”

Kentuckiana Pride thought big when no one else was or was able to, and now they have set a precedent and foundation whose reverberations will be heard in Louisville for decades to come.