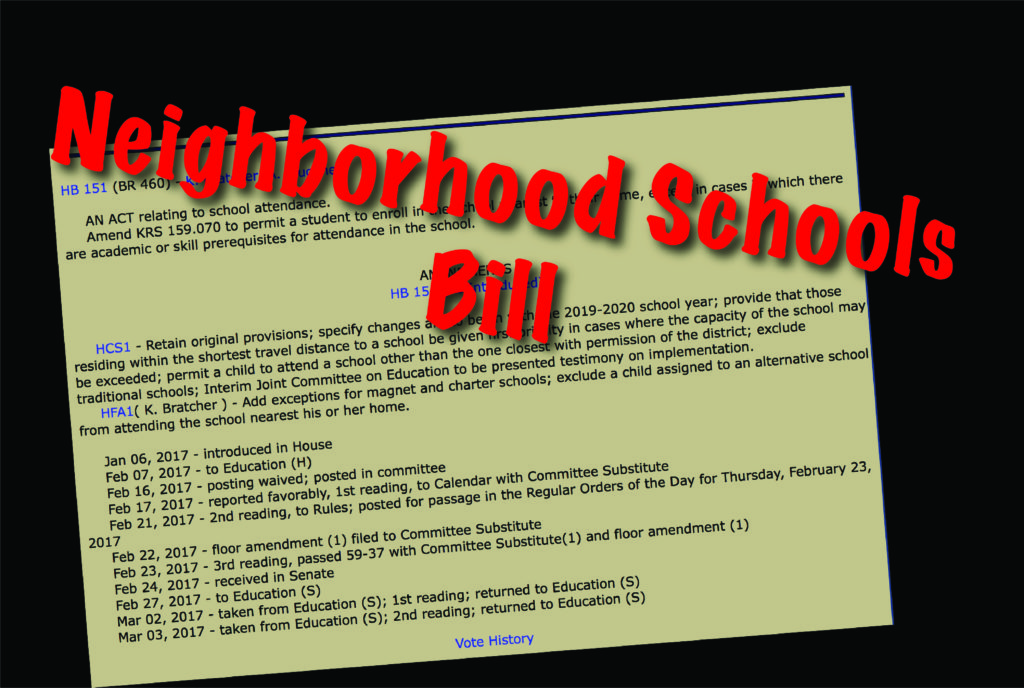 Kentucky State house has proposed House Bill 151, or what lawmakers are calling the “Neighborhood Schools” bill. It would allow students to attend the school closest to their home — sounds easy and uncomplicated enough. Kids would be closer to home and, while that sounds great on the surface, closer to home isn’t always the best for their education. And school is about education. Education extends beyond the chalkboard, and that’s my focus.

A child may live in a neighborhood that is fine. There is economic prosperity; the teachers are high-quality; and the school is well-funded, partially because parents have dollars to add. These students will get a fine education, but they will see only children who look like them and live in houses that are a lot like their own. They will miss gaining crucial cultural competency that comes from attending schools with children whose lives and faces are radically different from themselves.

Children in impoverished neighborhoods will attend the school closest to their homes, schools that are often less equipped and more poorly staffed than those in other neighborhoods. The educators in these schools will be competent, but they will be battling, not only the challenge of students who are hungry, homeless or mitigated by factors outside of their control; they will battle the expectation to perform in schools where money doesn’t flow. Many of them reach into their own pockets to supply their students with necessary tools that still fall short of schools in wealthier areas. The quality of this education is questionable, the students’ paths to success more difficult. Like their wealthier counterparts, they also miss gaining important cultural competency by exposure to those outside their neighborhoods.

Within both of these groups, children with disabilities will attend schools that are close to home but ill-equipped, at varying degrees, to handle the challenges of a special-needs education.They will miss important educational opportunities and similar competency that comes from being enabled to perform by educators who specialize in their social and book learning.

What is cultural competency?

Cultural competency helps students to understand themselves and their place in society but also about what is outside of their neighborhoods — that there are people not only different from them in race, ethnicity but also in economic stability. This is important because having a general understanding and empathy for those different than ourselves creates the opportunity for us to bridge significant divides. We learn to make decisions from a place that isn’t fearful but understanding.

This bill is the creation and result of adults who have a lack of cultural competence and who are unable to navigate in a world that looks different than the one they believed existed 50 years ago — a time when America imagined itself a white paradise. That America is a fiction — always has been a fiction.

This bill is a continuation of social isolationism and isolationist policies that are being shopped from the top Republicans in government, all the way down to Republicans at the neighborhood level. It is being supported by people who don’t understand the long-term effects of stunting our nation as a member of a global and diverse society.

This bill isn’t about choice. This bill, like the Immigration ban, is about hiding from problems that we are afraid of and do not understand. We can’t understand them because we don’t know enough about the roots of the issues or the people involved.

Americans have been given several opportunities to be introspective, to look at our place in the world, how we fit and the effect we have. Because of our imperialist tendencies —the tendency we have to exert our influence in places that are economically desirable for our interests — we have instead doubled down on seeking those economic interests at the cost of lives here and in those places abroad. We have doubled down on the rhetoric and the fantasy that we are protecting America. We are only protecting our need to take what we want from countries we view as less powerful.

This bill allows parents, who are afraid of black, poor and foreign people, to isolate their children in an imaginary safety and pretend that none of these terrible things will soil their perfect babies. If they can hide these people from their kids maybe Brad and Becky will be better off.

When I started high school, I went to Male for a year. At the time, a long time ago, it was a school with a many wealthy students and many students who were white. It was well-known that many of these affluent students were actively using drugs and drinking alcohol at school and after. Both the drugs and the drinks were often stolen from their parents, who hid their own substance abuse in the finery of wealth. For many of the parents, sending their children to Male was a family tradition and held status amongst their social set. Seeing the behaviors of these students taught me some very nasty and specific things about wealth and privilege, especially as a poor kid whose parents struggled to make the bills. It also exposed me to a world that did not exist in my neighborhood.

I learned parents could be doctors and lawyers, and that kids and their families could afford to take vacations. My family wasn’t like this. We didn’t have the means; but the exposure taught me that I could possibly be either of those things and maybe even leave the city for fun. Because of my exposure to these kids, I saw that there were possibilities outside of our two-bedroom apartment, outside of my parents having to paint those apartments to keep us from being homeless and sleeping in the Chrysler.

When I left Male, I went to school at Seneca. Inside Seneca, there is a school for kids with special needs, The Binet School. Kids from the Binet School were sometimes mainstreamed into regular classrooms; and occasionally, when we were lucky, mainstream students, like myself, were allowed to spend time in their classes. Again, this allowed me to see life that was completely unlike my own. It afforded me the chance to be in a world where people had to work harder than I did, and did not always achieve the results that I took for granted. It gave me compassion for struggle — theirs and my own.

All of Kentucky’s children deserve the choice to attend a school that affords them the best education. The best school may not be the closest to home. The best school is the one that feeds the child’s internal fire and shows them slices of life that are unlike their own.

A good education should mentor and challenge our kids. It should encourage and facilitate opportunities for both. School is the place where we are formed as thinkers and members of a society. To do that and to do that well, we have to learn to navigate our selves and amongst others.

To isolate children in their neighborhoods because it seems convenient, in the long run, is anything but. This bill will do a grave disservice to Kentucky’s children and must not be allowed to advance any further. The deceptive language of convenience should be a flag to all parents that their children are at greater risk than being close to home. The easy way out is rarely the best.

In response to HB151, JCPS shared a letter. The letter explains the bill and contains important information for parents who want to contact their legislators and express their concerns. Please understand what our state’s children are being asked to risk. Don’t allow it. We’re full up on ignorant and culturally incompetent people; we don’t need to create more.