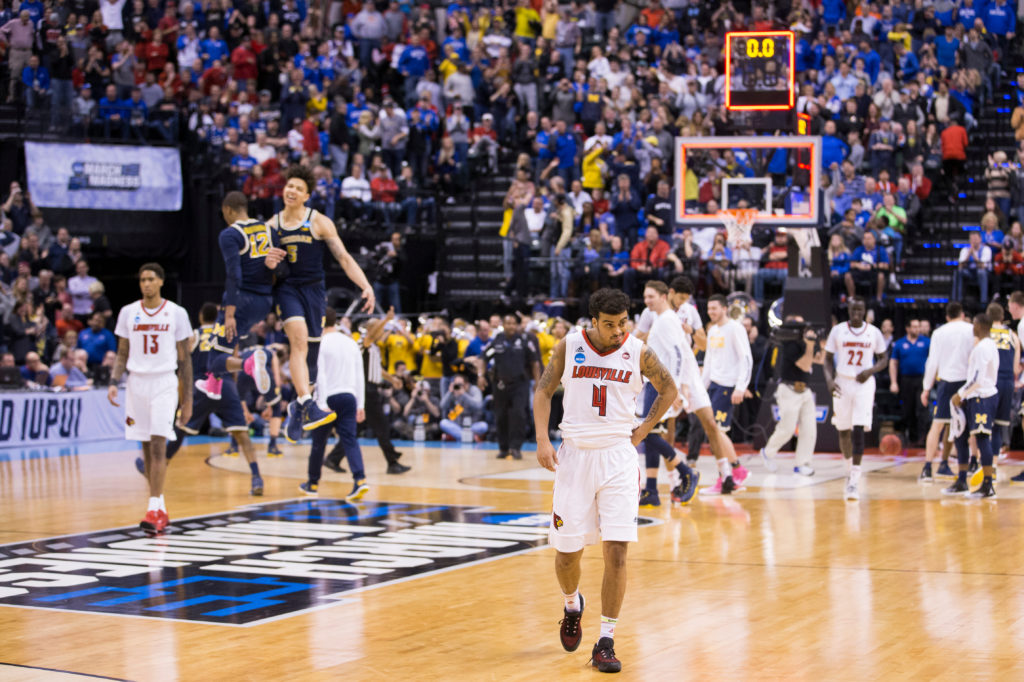 It came after it appeared the Cards (25-8) were playing some of their best basketball of the season. And it came in front of a whole bunch of Kentucky fans waiting to see their Wildcats play Wichita State at Bankers Life Fieldhouse in Indianapolis. It was no surprise, though. When the biggest positive from the first-round victory against Jacksonville State was that star guard Donovan Mitchell played really hard, despite missing almost all his shots, it’s not time to wheel the big ladder out. Rick Pitino’s teams at Louisville that made tournament runs were able to fight back to win games. This team showed its knack for imploding at the end. For most of the game, the Cardinals were playing great defense, out-rebounding the Wolverines and playing fast. Then, suddenly, they were losing their edge, fumbling and forcing things. Kind of like this year’s crop of those Charles Barkley, Samuel L. Jackson and Spike Lee commercials.

But the what ifs!

•What if 7-foot Anas Mahmoud could jump high enough to dunk those two balls instead of slamming them against the rim?

•What if former president James Ramsey had vacated this postseason instead of last year’s?

•What if Lynn Marshall, wife of Wichita State coach Gregg Marshall, had warmed up for her profane tirade at Kentucky players, fans, media, refs, floor moppers and concession workers by heckling Quentin Snider? Maybe it would have inspired Q to make a basket.

It will be OK, though, Cards fans. After a few days, weeks or months of walking around like an extra in “The Walking Dead,” life will seem worth living again. Hey, the baseball team is unbeaten, and spring football is coming soon.

Scott Recker: Louisville found themselves with a pretty good tournament draw, but the flashing red light on their path to the Elite Eight was a red-hot Michigan, a team that won four games in four days to win the Big Ten conference championship, sealed by a 15-point win over Wisconsin. Then, in the first round of the tournament, Michigan went 11-15 in the second half from three against an extremely-efficient and dangerous Oklahoma State, leading Rick Pitino to compare the Wolverines to the Golden State Warriors. And, on Sunday, when Michigan beat Pitino’s two-seeded Cardinals 73-69, they weaved together everything that was needed to pull an upset: They once again showed second-half poise, dropping dagger after dagger; they clamped down on UofL’s bigs and made their guards play hero ball. Despite Louisville’s press causing two late turnovers, Michigan had only six total on the day, not allowing (too many) easy transition buckets; and, most important, Michigan had a player who put together a masterful what-the-fuck-just-happened game. Moritz Wagner, the 6-foot 11-inch sophomore from Germany, pulled out a bag full of weapons on his way to scoring 26 points… while going an insanely efficient 11-14 from the field. He was nearly impossible to guard — in the first half he worked Louisville’s defensive with an evasive back-to-the-basket game from the high post, using his size to bully defenders into the paint, and using his handles and agility to dribble and spin for the finish. He was turning so quickly into his drives that Louisville’s help defense was caught out of position over and over. Then came the midpoint of the second half. He stole a pass and led a fast break, ending with an assist. Then, he hit a three. Then, the Louisville defense respected his range, and he scored off of a pump fake drive. The NCAA should investigate if Kristaps Porzingis snuck into Bakers Life Fieldhouse wearing a Moritz Wagner mask. He looked like an NBA player playing in a high school game. Louisville’s perimeter defense found a way to keep Michigan’s shooters in check, but the scrappy Wolverines found a way to piece together another wild second half victory. March Madness, the patron saint of chaos.

Stuart Perelmuter: When the Cardinals responded to the game’s first tie by ending the half with an eight-point run in 69 seconds, it was hard not to think of Luuuuuke Hancock using the force in the 2013 championship. With the Cards down 12 in that Michigan game, the backup wing ignited a 14-3 rally with four straight threes punctuated by a steal that led to the most monstrous of alley-oop dunks from fellow reserve Montrezl Harrell.

Now, with Louisville’s bench anchored by a new Jedi namesake, the stage was perfectly set for Cards fans to jump out of their seats, shouting, “R(e)ayyyyyyyy!”

But this time, the force failed to awaken. The Wolverines struck back.

With point guard Quentin Snider suffering through an uncharacteristically off day, the second-half interior defense was all too typical. Two days after making the once middling Norbertas Giga look like a lottery pick (30 points, 9 rebounds), the Cards allowed Michigan to dominate the paint and made Moritz Wagner the second big man in a row to score a career high against them (26).

Eliminating those defensive lapses will be job No. 1 during an off-season that’ll be at least a week longer than most observers expected. If they can do that, with seven of the team’s eight top players returning, and an outstanding freshman class coming in, the Cards may come back more powerful than you can possibly imagine.

Hope is far from dead. Only, for the next seven months, it’ll be frozen in carbonite.

Aaron Yarmuth: Well, that was fun…

It’s always a sad ending, unless you win the last game of the tournament, but it’s even more disappointing because this team was better than where it finished.

The worst part, at least for me, as a UofL fan, is it was so much like the loss to Duke in the ACC tournament: Not only was the game winnable, but it felt like the Cards were the better team. In both games UofL had sizable second-half leads, only to watch them erode on a series of mental mistakes and defensive lapses. The worst part — that horrible feeling — isn’t just losing, but losing games UofL was in a position to win.

Sure, everyone likes to credit Michigan being a “hot team.” And, yes, they are. (I mean for god’s sake, they survived a plane crash on their way to winning the Big 10 Conference Tournament.) But Michigan isn’t just hot — they are well-coached, smart, disciplined and have multiple really-good players. It also bears mentioning, the Big 10 was as underrated through out this season as the ACC was overrated.

But Michigan played its game, and played it better than UofL. For example, Michigan seemingly never contested a defensive rebound. If they missed a shot, they were content to give up the rebound and make sure they got back on defense, which in turn, prevented UofL from getting out in transition and finding easy fast-break opportunities.

Similarly, UofL was (justifiably) so determined to defend Michigan from three-pointers, Michigan took advantage of the space that created in the lane. With more attention on the three-point line, Louisville’s defense had less supporting help in the middle, and Michigan exploited it.

In the end, UofL might beat Michigan seven-or eight-out-of-ten times. But that’s not the NCAA tournament.

The Cards will be really good next year. Personally, I hope UofL never plays in Indianapolis again. Sure, it was the regional that UofL rolled through on their way to their 2013 championship, but even then Indy didn’t even let the Cards leave with one of Kevin Ware’s legs. Maybe a low-one seed takes them out West for the first few rounds… then on to San Antonio for the Final Four.