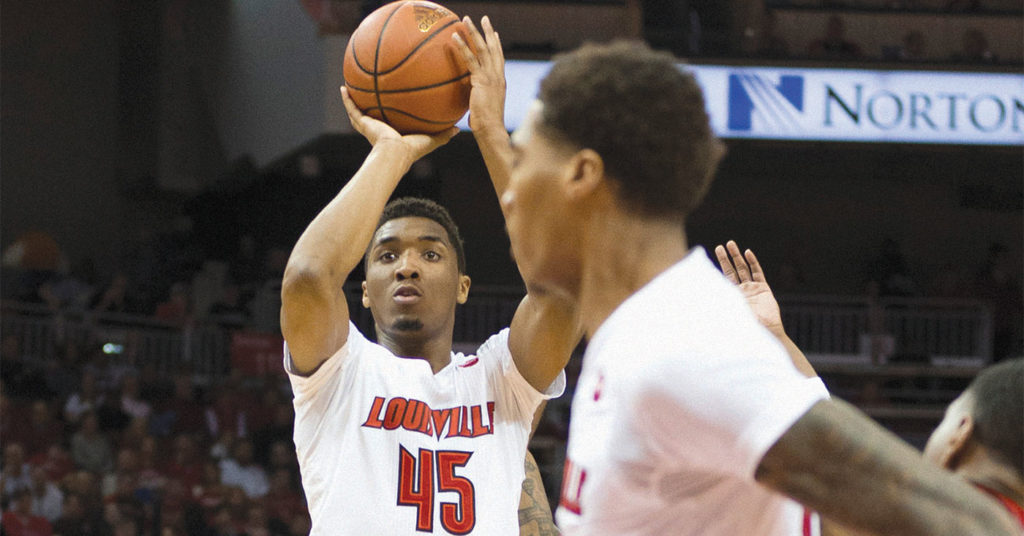 The first text I received after UofL’s two-seed was unveiled was: “I think that bodes well for our NCAA discipline. Shouldn’t get any additional penalties.” I thought that might be a bit of a stretch, but not entirely out of the question — it does seem difficult to believe that the NCAA would give Louisville such a favorable draw in the NCAA tournament if it was considering serious additional penalties after last year’s self-imposed postseason ban.

But let that be the only reference to last year’s misery, as this year’s Cardinals prepare to make a loud return to the NCAA tournament.

How’d we get here?

After 32 games, winning 24 and finishing tied-second in the Atlantic Coast Conference (ACC) — the consensus best-conference in the nation — the NCAA selection committee ranked UofL 8th overall in the country, which ultimately landed them a two-seed.

Those ranking ahead of the Cards include: Villanova, Kansas, North Carolina, Gonzaga, Kentucky, Arizona and Duke.

For Louisville, finishing the season by losing three out of five games, and four out of their last nine, it hardly feels like they are the eighth best team in the country — much less a legitimate contender. But, this is the emotional response fans feel after several disappointing and frustrating losses (note, I am as guilty as anyone). But it’s important to keep a couple of things in perspective:

Louisville played the second most difficult schedule in the country, including 11 games against top-25 opponents.

Among that second toughest schedule, the Cards didn’t have a single bad loss. Their worst loss of the season came at Wake Forest on their senior night (their last home game of the season). After that, five of their other losses came against top-25 teams on the road, as well as number-eleven Baylor and number-six Duke, both on neutral sites.

In the end, Louisville probably deserved to end up where they did.

So what are they going to do with it?

UofL can beat anyone in the country. Do I expect them to win six in a row, and, in-turn, a national championship? No. But they could.

As I like to remind everyone: You don’t have to beat everyone in your bracket, just the team in front of you.

So for UofL, I think Pitino takes advantage of the extended time off after losing early in the ACC tournament, refocuses his Cards and makes a run to the Final Four.

What do they need to do to get there

This team has always been long, athletic and relatively-deep off the bench. However, they started the season relatively young and inexperienced, offensively-challenged and lacking a true team identity. For instance, they’re OK on defense, but not one of the shutdown-defensive UofL teams of recent history. They also don’t have the single, reliable leader, or leaders, on other teams — the Peyton Siva, Russ Smith types.

Donovan Mitchell is that talent and player who could lead this team to a championship. However, as Pitino has noted, despite being the best player, he is still young, and with inexperience comes limitations. After the loss to Wake Forest, in which Mitchell scored only seven points — none after the first four minutes of the game — Pitino remarked that Donovan’s inexperience showed, when Wake’s defense took his scoring away from him, he let it affect his effectiveness in other areas of the game, like passing, rebounding and defending.

In total, it’s understandable that Pitino “hasn’t been so bullish on this team,” but UofL has proven it can play with, and beat, anyone in the country (except, as UofL fans well-know… Virginia).

Pitino has taken this team, with all of its potential and flaws, and cobbled-together a top-10 team — a contender — and all against the second most difficult schedule in the country. He has found a multitude of ways to win. He’s won games with defense — UK. He’s won games with offense — out-shooting Virginia Tech 94-90, making 12 three-point shots. He’s probably had no fewer than five or six individuals be the difference-maker in wins this year — like Quentin Snider’s heroic effort against UK, and “Hot-Hand” Ryan McMahon shooting the Cards to an overtime win at Syracuse.

Before the Cards tip on Friday, Pitino doesn’t have to rebuild from scratch. He just has to get this team to recommit to defense, rebounding and make more free throws — what UofL teams do in March.

Free throws have been comically-awful this year, especially in recent weeks. The Cards, shooting 68.5 percent, nationally rank 232 in free throw shooting percentage. This statistic is a killer — especially considering that they miss an average of 6.7 free throws per game, and average only 7.6 points per loss. In other words, that’s about the difference.

And one more thing: Pitino has to get Mitchell to stay out of foul trouble. In too many games, Mitchell is missing crucial minutes, especially in the second half when he is needed most, because he is in foul trouble. Take the last game, the Cards’ loss to Duke in the ACC tournament: UofL was up 64-58 when Mitchell got his fourth foul and went to the bench for about four minutes. By the time he came back, Duke had gone on a 12-4 run to take the lead.

This UofL team has so many guys who, on a given night, can be the guy. But Mitchell’s talent and athleticism make him too important in more ways than just scoring for him to be missing time because of foul trouble. If Mitchell can stay on the floor, contributing for 40 minutes, UofL has a great chance against anyone. Then it just comes down to making the big play at the big moment… and some free throws.