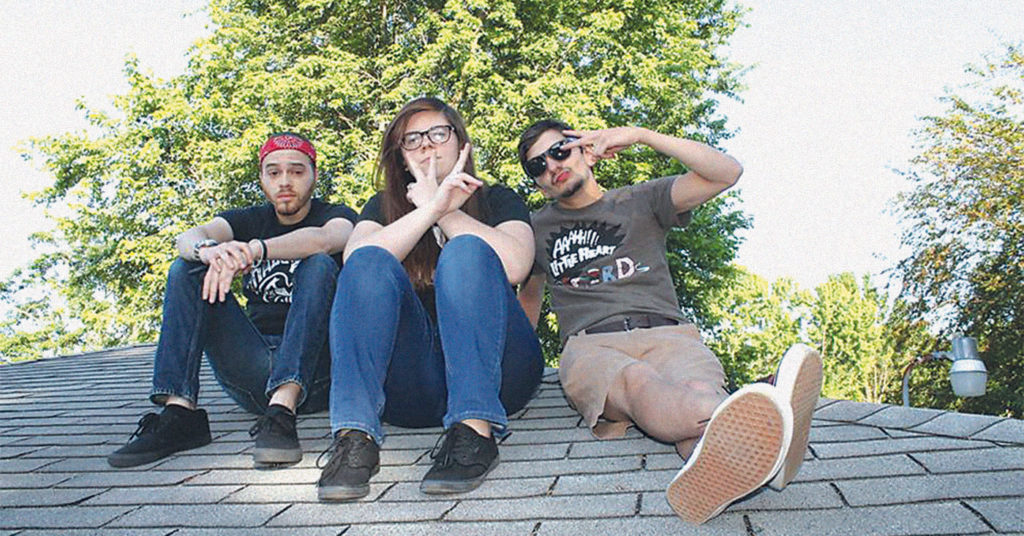 After taking a break in 2016, Shadowpact has returned with Respawn, a video game-themed EP that takes risks with delivery, production and narrative structure. The hip-hop crew of Modern Marvill and Sleye Kooper and Artemis the Archer — whose last release was 2015’s Stone the Crows — receive extra life on Respawn through their collaboration with DJ Shaheed, who adds an airy lightness to the production, haunting and ephemeral, counter-balanced by tight trap work.

At five songs, the album is set up to thematically mirror the general structure of a video game, with each piece telling a part of the overall story. Shadowpact has explored the tonality of video games in the past, for instance on their bit-crushed debut full-length, The Narrative. But, where previous tracks have used the musicality of classic gaming as a sample source of inspiration for references, the material on Respawn is an abstraction, a sublime evaluation of gaming on a cultural level.

“It’s a video game theme more in conception,” said Marvill, who splits time on the mic with Kooper. “I mean, conceptually, we wanted to arrange it in the things that you see in a video game. The first song is called ‘High Score,’ the second track is ‘Respawn,’ about our rebirth, the third song is ‘Cut Scene,’ and we’re rapping back and forth. And we wanted it to be a strong comeback. We wanted to do something that reflected that. ‘Boss Fight’ is us overcoming all the stuff that happened in 2016.”

When I met them at the Hideaway Saloon on a recent Sunday night, we sat down at one of the many video game systems to warm up. Lifetime players, the members of Shadowpact brought the melee heat down on both ‘Super Smash Bros.’ and ‘Super Mario Kart,’ both for the GameCube. Everyone had their strengths and weaknesses at Smash Bros., but turns out that producer and live DJ Artemis is absolutely untouchable at Mario Kart.

It’s a lifetime obsession that started at a young age, in some cases part of family life. “I really liked Pokemon on Gameboy and Unreal Tournament on PC with my Dad. Stuff like ‘Duck Hunt,’” Artemis said. Unlike everyone else at the table, she claims to have never tried to kill the dog.

For Sleye, “I was in kindergarten or first grade, and the PS1 had just come out. The school that I went to had a card that would come out that would tell you about your behavior. My dad said if I got five greens in a row (green indicating best behavior), I could get a PS1. That Friday, my teacher laid some shit on me, and tried to give me a red. I told the teacher what the deal was and laid on my impeccable charm also shed a couple kindergarten tears and told her I’d be on my best behavior if she gave me a green. I lied.”

Backed by Bryan Puckett and Little Heart Records, the trio came out of the gate swinging with The Narrative, an offering that feels fresh, but never inexperienced. Featuring collaborations with Dr. Dundiff and Touch AC, the album established the prowess of both Marvill and Kooper as clever emcees, and Artemis as a producer with an ear for a solid hook. Their follow-up, Stone the Crows, saw Shadowpact digging into a higher energy, almost-pop-influenced hip-hop style with long-form storytelling and thematic exploration.

Other than a handful of singles, they remained relatively quiet in 2016. That time off had a profound effect on their outlook. According to Sleye, “I feel like people have stopped caring about our music and have forgotten about us so we are trying to stand out. Taking risks is what you have to do to stay relevant and to be original if not you just fall in the same wave as the other hundred million rappers in the world.” •

Shadowpact’s latest record Respawn is out now, and available to stream or purchase via Bandcamp.