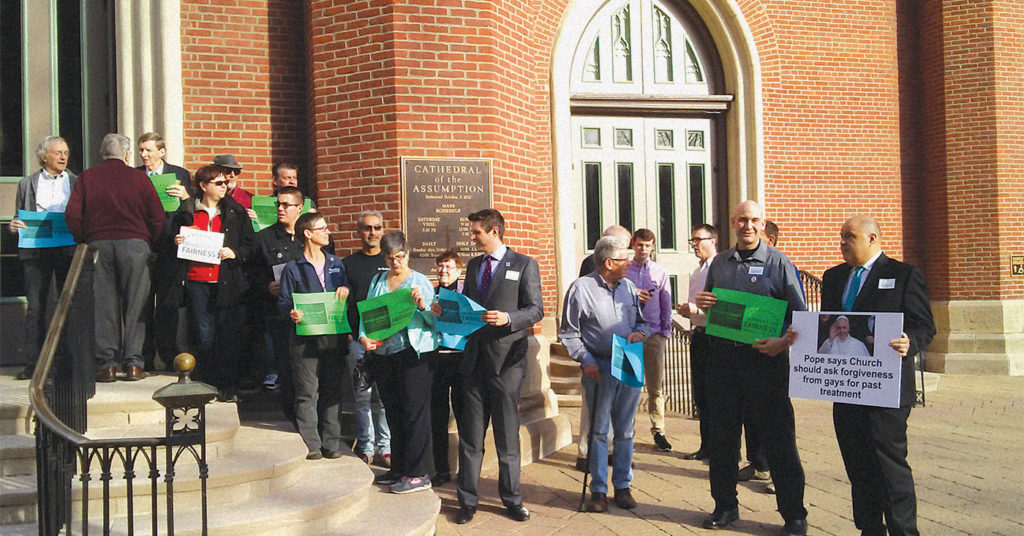 The Rev. Joseph Fowler has been a priest for 56 years, but he stood with other Catholics on the steps of Louisville’s cathedral again this year to disagree with Archbishop Joseph Kurtz, urging him to change his stance on LGBT rights.

Fowler, along with Catholics for Fairness, gathered Sunday to ask Kurtz to support Fairness laws that would prohibit discrimination in Kentucky on the basis of sexual orientation and gender identity.

“It’s not endorsing gay marriage, etc. It’s basic human rights everyone should have,” said Fowler. “I don’t know why our leadership would not be in favor of that.”

This was the sixth annual LGBT Pilgrimage to the Cathedral of the Assumption organized by Catholics for Fairness, a part of the larger Fairness Campaign Coalition. The marchers have varying relationships with the Catholic church, but all want equal treatment and protections for the LGBT community. It is a goal they believe is popular among Catholics, but not among the church hierarchy.

In response to LEO Weekly’s request for comment, the Catholic Archdiocese of Louisville said in a statement that “the Catholic Church is a leading advocate for the dignity of all people,” but has concerns about any legislation that “might go beyond prohibiting unjust discrimination and cause unintended consequences.”

“Concerns could include an inadequate distinction between sexual inclination and behavior and religious liberty protections,” said the statement.

Under Kurtz, the Archdiocese refused to approve a headstone engraved with an image of the Supreme Court building and wedding rings, sought by Greg Bourke and Michael De Leon, plaintiffs in the landmark marriage equality Supreme Court case. In a letter to the couple, the Archdiocese said engravings “are permitted so long as they do not conflict with any teaching of the Church. Your proposed markings are not in keeping with this requirement.”

The Archdiocese also refused to allow Bourke to return as a Boy Scout leader in a local Catholic parish troop, after he was forced to resign in 2012 for his sexual orientation.

On Sunday, De Leon said at the vigil outside the cathedral that people often ask him why he continues to fight for acceptance in the Catholic church, when there are other more tolerant Christian denominations.

“It’s hard to describe that feeling in your heart, when you’re with your brothers and sisters in a faith community, and that’s ours,” said De Leon.

Chris Hartman, director of the Fairness Campaign, said getting the Archdiocese to support a statewide Fairness law could be crucial to its passing. “It would open dialogue and acceptance from a faithful perspective to families and churches that hadn’t existed before,” he said in an email interview.

Hartman is optimistic, even in an overtly religious state like Kentucky, because other Christian denominations have already voiced support. “I think most faith traditions now have broader public support for LGBT people, but church leadership is lagging behind, like our legislature.”

Hartman referenced remarks made by Kurtz’s predecessor, Archbishop Thomas Kelly, who leaned toward a Louisville Fairness ordinance. Kelly said in 1995: “The Catholic Church supports the basic human rights of all persons, and affirms the fact that homosexual persons have the same rights as all persons, including the right to be treated in a manner that upholds their personal dignity … The intrinsic dignity of each person must be respected in word and in action.”

State Rep. Jim Wayne, D-35, who attended the pilgrimage and is a Catholic, also believes support from Kurtz could be instrumental in passing statewide Fairness legislation. “[It] would help convince, especially Catholic legislators and other Christians who base their discrimination on the Bible that you don’t do that.”

Another event attendee, Maria Price, 51, said it isn’t hard for her to reconcile being Catholic and a supporter of Fairness laws. She looks to the Bible for guidance, not the church hierarchy.

“Our call [is] to change unjust systems that make people poor and keep people stuck in poverty,” said Price. “And there is not one word from the lips of Jesus about homosexuality. So really, it’s misplaced energy.”

Susanna Sugrue, 58, said the church hierarchy is losing touch with its parish members.