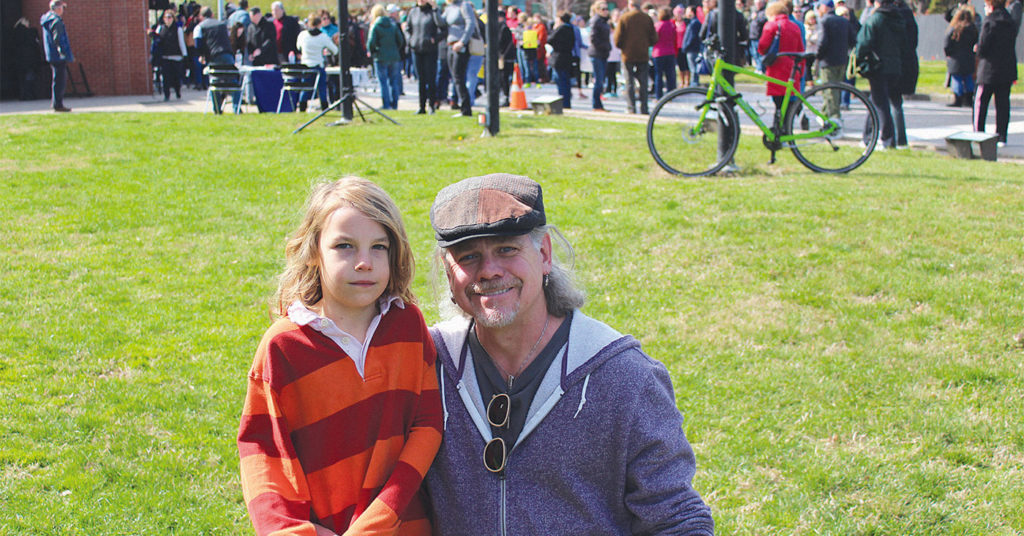 Like others attending the WeStandTogether Rally at the Louisville JCC on Sunday, Rus Funk and his son were not Jewish. Funk, a Unitarian, said he wanted to stand with his community to oppose hateful acts, such as the bomb threat issued to the center last week.

“It is part of our faith, that when any one of us gets hit, we step up,” said 52-year-old Funk, who brought his 7-year-old son Kiernan.

Hundreds gathered for the rally, which took place on the front steps of the JCC in clear view of passing traffic. There were a variety of speakers from a wide range of religious and community groups during the hourlong rally.

For me, growing up, my neighborhood Jewish Community Center was like a second home. As a Jew in a very non-Jewish area in Connecticut, it was a place where I could feel a unique kind of kinship. So that’s why a recent series of bomb threats to JCCs across the nation digs extra deep to me. And that’s why it was so important to see the Louisville community come out in droves for the WeStandTogether Rally for Unity.

Among those attending was U.S. Rep. John Yarmuth, D-Louisville. “This is pretty personal to me,” he told the crowd. “I grew up in this building.”

Yarmuth went on to say he knows firsthand the passionate, tolerant and open community that we have here in Louisville and he believes that these acts of hatred are not representative of our community, nation or even the world.

Rabbi Joe Rooks Rapport of The Temple noted that the rally fell on the Jewish holiday of Purim. “The lesson of Purim is a lesson of solidarity,” said Rapport. “The heroes of the Purim tale understood the value which is ingrained within our people. All of us are responsible for one another.”

The rally was brought to a close with two musical numbers by Louisville Orchestra Music Director Teddy Abrams on keyboard. The first was Gustav Mahler’s “Urlicht” (primal light), a slow, somber piece that imagines a place without the worldly woes of pain and violence. Abrams immediately followed this, to the delight of attendees, with Randy Newman hit, “You’ve Got A Friend in Me.”

Indeed, that’s what my childhood JCC meant to me: friendship and a sense of belonging. On Sunday, it was evident that, here in Louisville, the spirit of friendship was still strong.