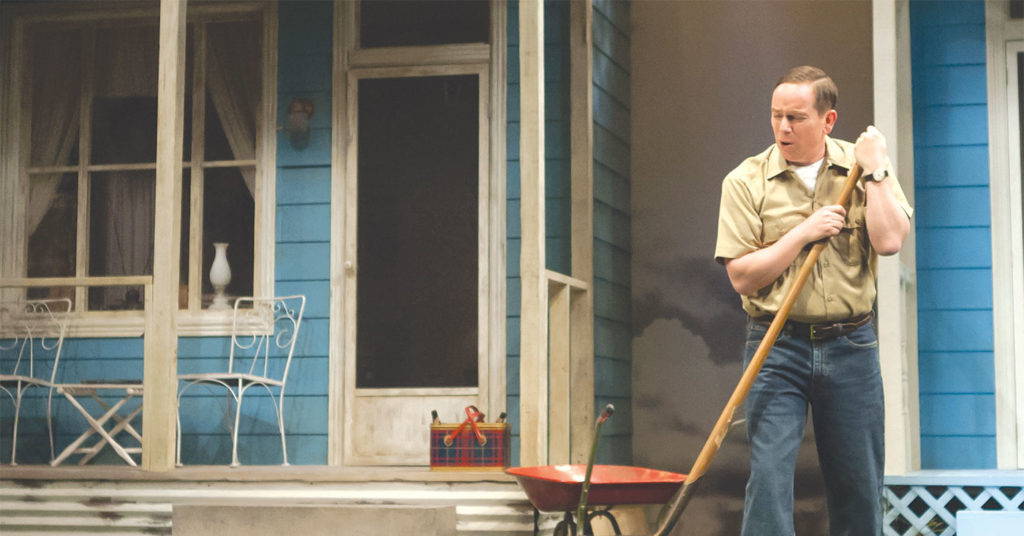 Considering how enduringly-popular post-apocalyptic fiction is on film, it’s surprising how seldom it shows up in the theater. It’s starting to trend, though. In recent years, Theatre [502] has presented Anne Washburn’s dark comedy “Mr. Burns: A Post-Electric Play” (2012). And prior to this year, the Humana Festival of New American Plays at Actors Theatre of Louisville had produced at least two memorable apocalyptic works. (Note: I say two “memorable” works, because that’s how many I can recall without doing any research.)

In 2011, the Festival offered a multi-authored anthology of droll apocalyptic vignettes called “The End.” Among other things, it presented the sad plight of the Four Horsemen of the Apocalypse facing unemployment after finishing their job (take heed, Republicans!). Last year, the Festival presented the foreboding “Wellesley Girl,” a political drama set in the wasted environment of a post-apocalyptic future.

Basil Kreimendahl’s “We’re Gonna Be Okay,” which opened last week on this year’s Humana Festival bill, seems at first to be a pre-apocalyptic comedy of manners. The setting is suburbia, October 1962. Two houses sit side by side, both stocked with look-alike charcoal grills. One is shiny and new, the other battered and well-used. The new one is owned by Efran (Sam Breslin Wright) a cocky, upwardly mobile fellow whose officious personality reflects his office life; his grill is for cooking steaks. The old one belongs to Sul (Scott Drummond), a man who makes his living with his skilled hands (steaks are not his usual fare).

For Efran, this neighborhood is just a stopping point on the way up. For Sul, it’s just a stopping point. Efran’s wife Leena (Kelly McAndrew) is a perky, enthusiastic blonde with a knack for crafts and a degree in biology that she’s put on the shelf in favor of homemaking and childrearing. Their son Jake (Andrew Cutler) is a promising, young baseball player.

In contrast, worry and fatigue are etched on the face of Sul’s dowdy wife Mag (Anne-Marie McNamara). Their guitar-wielding daughter Deanna (Anne-Marie Trabolsi) is a simmering youth with emergent radical leanings.

The specter of the Cuban Missile Crisis looms over both houses. And the action kicks off when Efren proposes that he will supply the materials for a bomb shelter if Sul will use his skill and know-how to build it.

As the deal comes together and construction begins, Director Lisa Peterson, Scenic Designer Dane Laffrey, Costume Designer Jessica Pabst, and an outstanding cast create a campy atmosphere. Then, as we hear John F. Kennedy addressing the nation about the crisis, the mood suddenly grows dark.

Under the surface, though, this is an idea-driven script that seems timely in an era when “prepping” has become a pop-culture phenomenon. Efran’s ideas about how to survive an apocalypse are shaped by J.G. Ballard’s remarkably prescient 1962 novel “The Drowned World,” in which the Earth’s temperature has risen, polar ice caps have melted, and most of the world has flooded. And in the second half of the play, when the families literally go under the surface, the dimly lighted shelter (lighting design by Brian H. Scott; sound design by Christian Frederickson) it turns out that few things go as planned.

Another Humana Festival play, Molly Smith Metzler’s “Cry It Out,” opened Sunday night. It, too, feels at first like a comedy of manners. Again, the main characters are neighbors: two mothers who are caring for newborns. They live in a modest Long Island, New York, neighborhood — but proximity aside, Lina (Andrea Syglowski) and Jessie (Jessica Dickey) couldn’t be more different. Lina and family are living with her drunken mother-in-law, because the housing is cheap. Jessica and her husband paid cash for their home. Lina is an entry-level health care worker. Jessie is well-paid attorney on the cusp of becoming a partner.

Their bonding is comic gold. Lina is a combative spirit given to colorfully ribald language — and, though Jessie is more reserved, it isn’t long before Lina’s infectious style loosens her up. Both women are obsessed with their handheld baby monitors, and since the monitors have a range of only 65 feet, they’re forced to share coffee and conversation in Jessie’s backyard. Their personalities, tales, worries are finely written. And though much of their conversation is light, they share a common worry about the prospect of leaving their babies and returning to the workforce. For prosperous Jessie, this is a matter of choice — but not for Lina.

During the early episodes of the play, Syglowski, Dickey and Director Davis McCallum build such a warmly-fun environment that it’s a palpable shock when a fellow named Mitchell (Jeff Biehl) shows up in the yard with an unsettling request.

Mitchell — whose wealth far exceeds even that of Jessie’s — lives atop the looming hill that overlooks Jessie’s yard. From that vantage, he’s been watching the friends’ daily routine — watching closely enough that he knows their schedule down to the minute. It turns out that Mitchell’s wife Adrienne (Liv Rooth) has also recently given birth — and Mitchell wants Jessie and Lina to invite her down to join their kaffeeklatsch.

From that point on, what had been a comedy of manners becomes a deeply felt topical drama that takes audiences on an emotional roller-coaster ride that whipsaws through laughs, poignant tears and moments of monumental rage. In the course of discussing parenthood, postpartum depression, and gender roles, the play offers some extraordinary insights that will send you out of the theater with much to ponder.