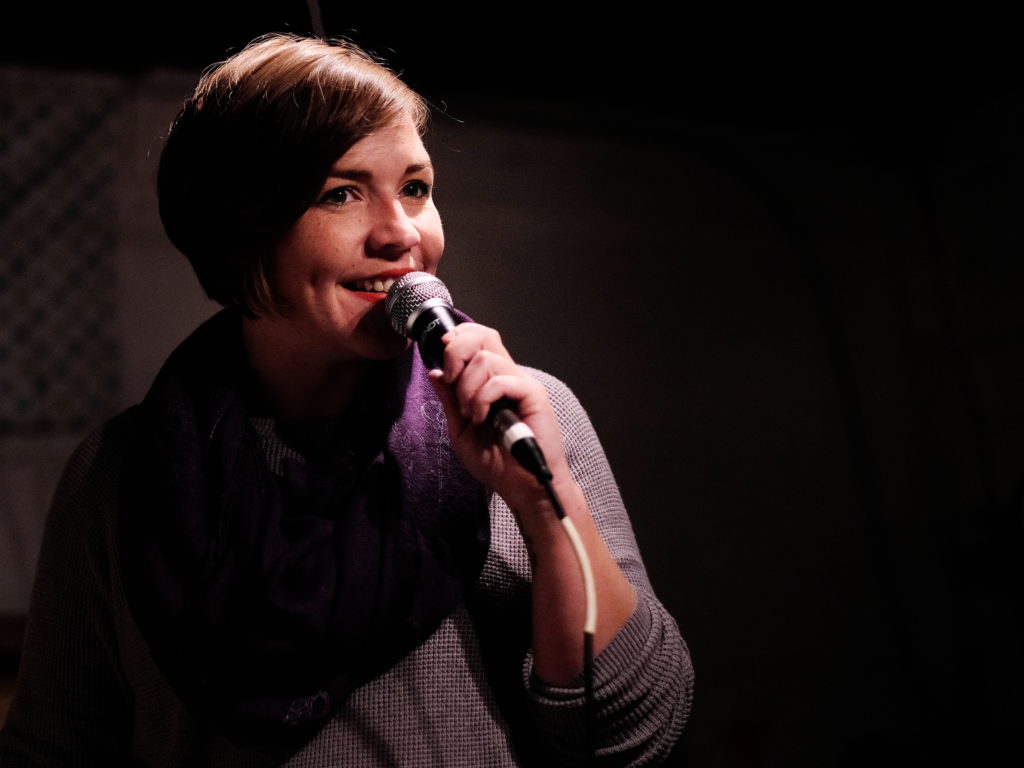 Last week, I saw one of the best comedy shows I’ve ever experienced in Louisville. It wasn’t at The Caravan, Louisville’s full-time comedy club. It wasn’t at The Bard’s Town or any of the other bars and restaurants that have started hosting occasional comedy nights.

No, instead we were in a dirty basement, 30 to 40 people packed into the musty space, weed smoke thick in the air, and bowls of candy being passed around.

Welcome to The Housies.

I first got wind of The Housies in a thread on Facebook about a month and a half ago. I follow several local comedians on social media, and watching them trade jokes and (usually) good-natured insults frequently brightens my day.

I showed up to the modest house — whose tenant asked to remain anonymous — in Shelby park at 8:30 p.m. on a Wednesday night, with the show set to start at 9 p.m.

The crowd wasn’t prompt, and I realize that, in its shape and form, this show is a lot more like a college house party than a night at the club. People start to trickle in, and then suddenly you look around, and it’s jumping.

The organizers wisely chose to wait until the crowd got thick before starting the show. People were just milling about and having a good time, knocking back drinks, smoking one-hitters and sitting on the front porch, smoking cigarettes.

Max, a UofL student, sort of shrugged when I asked how he heard about the show. “Just friends… A guy in my sociology class told me about it.” Another porch person had heard about the show from Jax Howie, who handles MC duties for the shows, introducing the comedians, telling jokes in-between acts, and doing his own quick set to warm up the crowd.

While there were plenty of local comedians in the crowd, there were also a bunch of other college kids, as well as working-class 20- and 30-somethings. Overall, it was a young crowd.

Comedian Kate Sedgwick — who had joined us on the porch with a convivial “Hey fuckers” — talked about how the age of the crowd changes the tone of the evening. Sedgwick is somewhere in her late 30s or early 40s. She’s short and spunky, with bleached blonde hair and this world-weary, takes-no-shit look on her face. “So what you come up against a lot in this town, (is) older people, very conservative people,” said Sedgwick. These people, she reported, don’t like her extended jokes about pussies, and how bad her current booty call is at eating hers.

Nathan Woodard, a guy in his late 20s with dirty blonde hair, glasses and a sort professorial look, is another comedian. He joked about the older folks at shows. “Sometimes you might say something crass, or use a slur ironically, and, in a crowd of older folk, they might be like “Yeeaahhhh.” Woodard’s “yeah” is slow and creepy, drawn out for maximum discomfort, and, therefore, it’s pretty funny.

Dan Alten, the main organizer of the Housies, showed up on the porch, playing the host and gauging the crowd.

The Housie was the first time I met Alten, but I’ve been hearing his name for months, as the guy with the hustle who was becoming one of the go-to bookers in Louisville.

I headed downstairs to check out the basement. It’s like what you find in houses all over — unfinished and mostly-dry, with a low-ceiling and basic concrete walls.

I counted 34 chairs. Well, 34 if you count the futon, the ottoman, a moon chair and what looked like a cheap, folding, piano bench. The Housie invite had encouraged us to bring our own chairs.

One wall was decorated with fliers from past Housies, all bearing the name LAFF Fest, which is the name Alten and Howie use for the shows they book and promote.

Alten says the Housies started with a couple comedians in a room, doing material for each other — a couple of friends, probably eight people tops. “And that started evolving, and they ended up being popular, and it ended up being a lot easier to get people to come over to your friend’s house to watch comedy than to get them to go to a venue to watch comedy,” said Alten. They started booking out-of-towners, and the shows got bigger.

Show time creeps up, and the chairs fill, and there are people standing in the back.

Alten dims what little light there is in the audience, and charges up to the stage, which is just one corner of the room with a single mic and speaker set up. As if to punctate the low-production value of the evening, Alten holds his phone up to the mic, playing Eddy Grant’s “Electric Avenue.” These guys can’t even afford a sound system, but the room is packed.

Alten quickly introduces Howie, and Howie does a tight, five-minute set before inviting up the first comic. Howie is funnier than I’ve ever seen him, and he’s usually at least pretty good. One of the great things about following the comedy scene here is that you can see comedians getting better, almost in real time. Maybe Howie is so good tonight, because he’s in his element as master of ceremonies, and the confidence boost allows him to soar.

A lot of the comedians I talk to claim it’s all about confidence.

Whatever it is, people are laughing from the bottom of their guts quickly. While it’s tempting to chalk it up to the weed, I was stone-cold sober and cackling within a minute or two.

The evening progresses, with some stellar sets. I start to really notice the younger vibe play out — it’s a liberal, urban crowd. Danny Hucks, a big, round guy with long unkempt hair and a long beard, does bits about how how he’s bisexual. “I’d fuck anyone here,” he quips, and does some I-can’t-get-laid gags, but overlays them with his unique viewpoint. I’m not sure his set would go over in some of the clubs and bars I’ve visited. But at The Housie, it killed.

Alten does a set, mocking the conservatives who warned bestiality would get legalized if we passed marriage equality. But he does it by joking about how he was promised legalized bestiality, and it has yet to materialize. He’s particularly upset with the LGBT community for not lending a hand. “Hey, I helped with your thing,” he shouted.  Again, it’s hard to imagine bestiality jokes going over at the bar and grills that host comedy nights around town.

Finally, the headliner, a comic from New Orleans named Laura Sanders, takes the stage. She closes out the night with a half-hour set that underlines the liberal leanings of the crowd and the evening. She’s young and charismatic. Most of her set is about finding birth control in the Trump era, not wanting to have children and the depression liberals had to deal with starting on Nov. 11. Her set is funny, and a little painful in that cathartic way the best comedians can pull off. She has released a comedy album that debuted at No. 1 on the iTunes comedy charts. She’s skilled, but not yet a household name, so she takes her web development job with her on the road during her tours, to keep the bills paid.

On these tours she plays occasional house shows, mixed in among the clubs. “Whenever I schedule a bunch of shows, every show is a trust fall. But when I come to shows like this, I know it’s going to be a positive trust fall,” said Sanders.

The Housie I attended took in about $200, and they give as much as they can right back to the touring performer.

But, Sanders said, it wasn’t just the money or the good show that makes house shows great. It’s the party that comes afterward. She joked that house shows offered her something else. “I look forward to them, especially when I’m traveling alone, because I’m like, ‘Oh, I can also have friendship that night.’”

The lack of the almost-inescapable race-based and rapey humor from other shows was nice, the hard laughs were nice, and the weed and the passed-around jello shots were no doubt nice, but what really made the even memorable was the company.

It was humor, but it was, as Sanders said, something greater. It was friendship, an observation with a goofy sincerity that will probably earn me some gentle mockery from the comedians next time I bump into them on the internets. But the gentle jibes won’t make it any less true.

LAFF Fest will keep throwing clubs shows, but the Housies are taking a hiatus while Alten and Howie find another dank basement.

But keep your ear to the ground, and maybe I’ll see you at the next one.