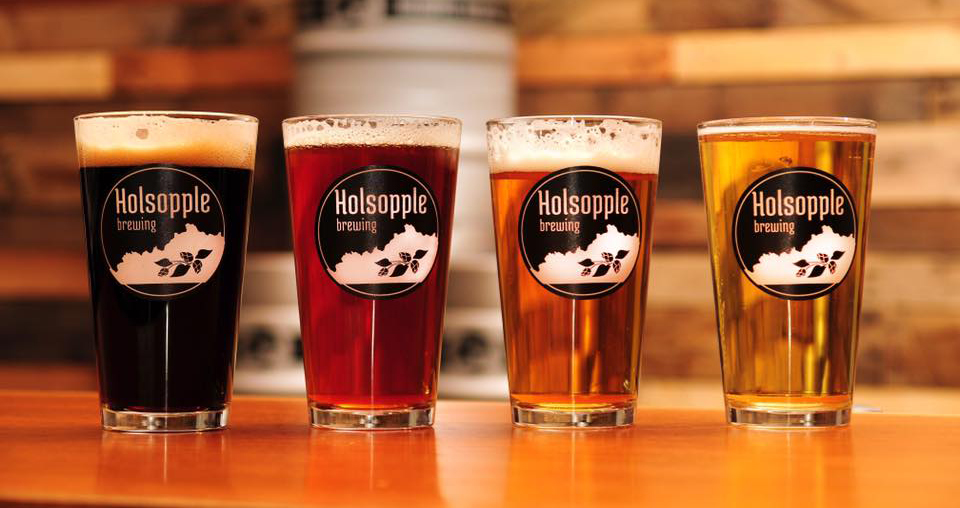 Located in the heart of the Lyndon neighborhood, Holsopple Brewing is the newest microbrewery to grace our fair city. A small venue, Holsopple is just off the beaten path, situated a little off of Lyndon Lane in a building behind a dance studio. As such, there is a rural quality to it that seems inviting and easy, perhaps manifested physically by the gravel lot and tent out front, or the barbecue truck wafting delicious smells. With a friendly bar staff, it’s easy to imagine that Holsopple will quickly become the neighborhood haunt. Here is what it currently has on tap.

Paula’s Pilsner
Holsopple’s answer to an American domestic, Paula’s Pilsner is exactly the beer that you grab after sweating in the summer heat, the reward for your yard work. This is bright and crisp, a light-colored pils with a moderate, 5-percent ABV. This is the definition of less filling and easy to drink, a smooth, but never watery light beer with a thin body.

The Golden Gambill
I was expecting something like the Victory Golden Monkey, a slightly fogged, golden-colored body with a Belgian tang. Instead, the Golden Gambill surprises you with a strong hop profile, somewhere between a traditional saison and an IPA, with only a hint of wheat flavoring. At 5.8-percent ABV, this is a solid ale that rewards repeat drinks.

Amber Lager
The Holsopple Amber Lager has a nice, malty warmth that recalls campfires on a cool fall evening, surrounded by friends. Coming in at 5.5-percent ABV, this isn’t terribly heavy, making it a nice beer to sip. Expect a burnt amber coloration to the body and a nice balanced taste — it’s not heavy, but certainly hearty.

Aloupa Pale Ale
A crystal-clear pour and deep yellow body announces the arrival of the Aloupa Pale Ale, an APA style beer with a reasonable hop profile. Not quite as rich as a Falls City Ale, there is a simplicity here that lends an ease to the drink that never quite overwhelms your senses. At 5.3-percent ABV, this is a mild beer with a gentle tang at the front end.

St. Söb Dry Irish Stout
As advertised, an Irish Stout with a black body, and a hint of licorice aroma. A blunted sweetness informs the flavor profile, which manages to remain dry for the aftertaste. At 4.9-percent ABV, a light take on the style, when so many competitors seek to overwhelm you. Expect a black, but not quite opaque body, and cream-colored foam.

Bob’s Blessing Porter [No longer on tap]
Comparatively hoppy to the stout and with a comparable body, the Bob’s Blessing Porter is a rich, malty brew that privileges robust chocolaty notes. A very soft aftertaste rewards repeat drinks, backed here by a 4.9-percent ABV, making again for an ideal and uncommon winter session beer. There is a light head that lacks the creamier texture of the stout, backed by a nice kick on the back end of the taste.

Holsopple Brewing is located at 8023 Catherine Lane. For more info, visit them on Facebook.