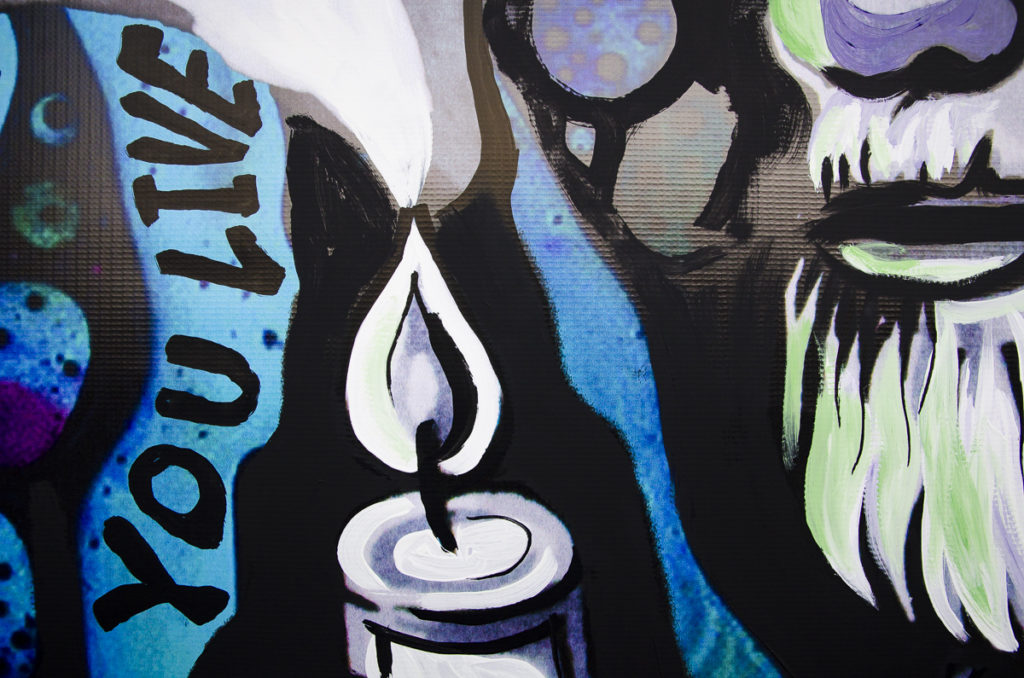 A detail of the mural, a collaboration of several local artists (photo by Nik Vechery)

There is a long tradition of music calling for love and peace, stretching from the “Where is the Love” to “We are the World” and beyond.

On Saturday night, the patio at Garage Bar was humming with a creative energy, and bathed in the glow of candlelight, as Jenna Dean, a local hip-hop group, was shooting the video for their upcoming single “Prayer.” That song follows in the tradition of other musical calls for unity.

The video shoot was also the unveiling of a mural adorning the exterior wall of the 712 East Market St., which faces the Garage Bar courtyard. The mural, a collaboration of several local artists, contains faces from all over the world, including a Syrian refugee, a Native-American and a young boy from Kenya, and other faces of different races and creeds. It also features words picked from the lyrics of “Prayer.”

MC and rapper Anthony Rasberry talked about the song.

“It’s a prayer for everyone,”  Rasberry said. “Everyone prays in different ways, or even if you just meditate, so the song for us is about that. You see everyone represented here, all different back grounds, and that’s Jenna Dean.”

Jenna Dean started as a collaboration between Raspberry and guitarist Jason D’Mello.

“I met Anthony probably three years ago at a dinner party, we started talking about music,” said D’Mello. “I had a show coming up at the Rye Back Porch Sessions. So we did this impromptu acoustic set.”

The duo meshed musically, and decided to keep the project going, adding other musicians to the group.

“We went through a few different line ups of band members and came up with the current roster,” said D’Mello.

According to Raspberry, Jenna Dean’s interest in unity comes partially from the makeup of the band itself: “We’re all different back grounds: Jason, he’s got the Indian ancestry. You got JP and I — we’re both African-American. Joel and Jamison are white guys.”

When D’Mello moved to Los Angeles two years ago, the band continued, with D’Mello coming home every couple of months to work on music.

“The songs were works in progress,” D’Mello said. “We had been sending back and forth over email, doing this cross-country collaboration. But everything really clicked last summer.”

The group decided to record the work they’d been doing with Kevin Ratterman at La La Land Studios. They laid down the tracks, and started working with SonaBLAST Records to get the music out. The result is 10 songs, the first of which, “Apathy,” was released as a single in January.

To help plan their strategy, the group hired Sydney Strabala, a Los Angeles-based artist and promoter. Strabala came up with the concept of using a mural to help promote Jenna Deans’ music and their ideas about the world. “Sydney started working with us last year. She’s a former student of mine from L.A. She’s an entrepreneur. She runs an Arts Collective called Underground Society, and when we started sharing our music with her, and asking how can we get this out, she started talking about murals,” said D’Mello.

Jenna Dean’s first conversations with Strabala actually happened at Garage Bar, so it’s fitting that they idea would come to fruition in the same Nulu atmosphere. As the artistic vision for “Prayer,” solidified, Strabala took the project to Los Angeles Director Sam Newton.

“I reached out to him, found out he was traveling around the world, and pitched him the idea,” said Strabala.  “Like, hey, why don’t you get some shots of these people, in different countries … and he’s gotten people in Kenya, Guam, Singapore, Thailand, all around the world.” Those images — pictures of all kinds of people holding a single candle — will be incorporated into the music video.

Praveen Arla, the owner of the wall and the building on which the mural resides talked about using his wall for art. It’s something he has hoped to do since he first bought the building. “When I got the building, the wall was very important to me,” said Arla. “You bring in artists, and give the wall back to the city, that’s kind of been my statement for a while.”

So when Jenna Dean needed a location, the Garage Bar patio and Arla’s wall were a perfect fit for the band’s vision of the project.

As I spoke with the creatives hanging out in the twilight, and Newton and the team got cameras ready, the word “project” got used a lot. Raspberry said that it’s important to how Jenna Dean wants to release their music. They want to work on multimedia and interactive projects that reinforce the themes of their work. For “Prayer,” that central theme is unity.

“So that unity that we bring, we try to display that through our music and our art,” Raspberry said. “And our music is part of a larger project.”

On Saturday, videographer Newton was shooting individual shots of people. In each shot, the person is holding a single red candle, back lit by hundreds of white candles that lined the wall under the mural.

Some of the people in the shoot are local actors or musicians. Some are friends of members of the band. A couple of friendly dog owners brought along their pups, and the canines became part of the video.

We’ll have to wait a little while to see the results of the shoot, but Jenna Dean plans on releasing an album worth of material between now and summer. Keep you ear to the ground, and maybe you can be involved in their next project.

In the meantime, you can stream their single, “Apathy.”