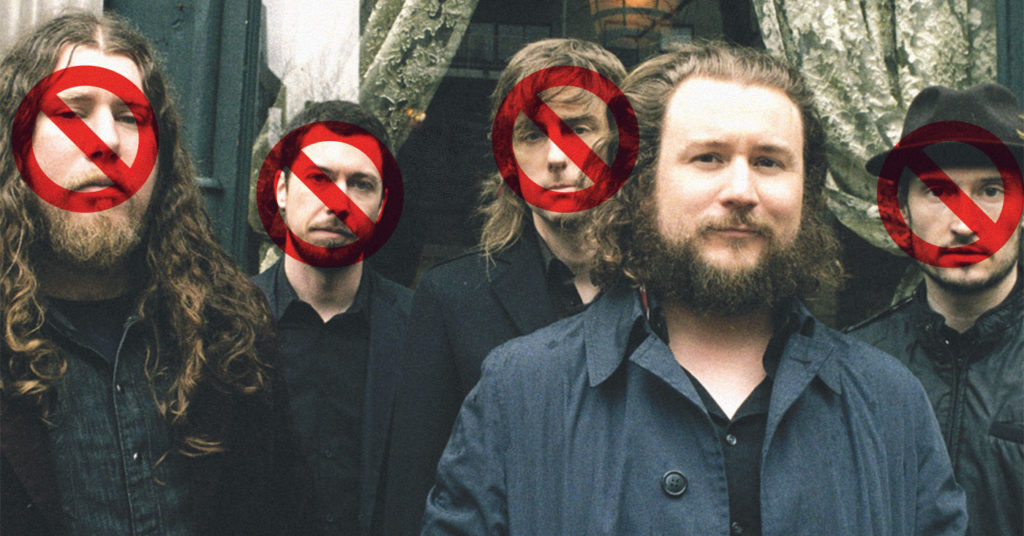 When Northern Kentucky University’s radio station WNKU announced that it would sell its license and transmitting site to the Bible Broadcasting Corp. earlier this year, it gave Gov. Matt Bevin an idea. And, on Tuesday, in an unprecedented move that no one can grasp, probably because it’s not legal, the governor gutted Louisville Public Media, handing over the reins of the radio station to the Westboro Church, those crazy Jesus people who stand on sidewalks during parades and tell children that they’re going to burn in hell.

“It’s simple. We’re a Christian nation, and, to achieve prosperity, we have to return to our roots,” Bevin said during a press conference. “Do you trust those liberal, journalism-school liars to report the news? I don’t. Do you want your children listening to the dangerous hard rock of bands like Wilco and Steely Dan and The National? Didn’t think so. We even have evidence that they’re slipping satanic messages into the classical station. And, worse, promoting commie composers. ”

The governor already has secured $18 million in tax breaks for a big wooden ship park that claims humans and dinosaurs ran around the Earth together, and he has also tried to replace the UofL’s Board of Trustee’s with fast food emperors. At the press conference, Bevin said his latest move is an educational initiative, which will have a positive impact on generations to come.

When contacted, the crazy Jesus people said that while they’re still in the process of identifying their programming, they already have some ideas floating around, including a news segment called “Why all you non-believing scum are going to hell today,” and at least five hours a day of church hymns updated through a contemporary pop country sound. According to crazy Jesus people leader Robbie Van Horn, they’re currently in talks with Luke Bryan.

“Can you imagine that? Cruising down Frankfort Avenue in the 250, blasting ‘Our God Is An Awesome God’ sung by Luke Bryan,” an excited Bevin said. “Can’t imagine a better way to crush the liberal agenda.”

Local man, who Tweeted ‘At least punk rock is going to be better under Trump,’ found in his parents basement eating Pringles, playing Final Fantasy

Erik Greyjoy Jr., who earlier this week jumped on the woke train to Donald Trump’s-gonna-make-punk-better mountain, was found yesterday in his parents’ basement, giving the business to a can of Pringles and yelling unprintable obscenities at Final Fantasy — the first one, as he requested that I make mention of.

“I mean, it’s just common sense — dude busts on the scene, being a dick, hating on everybody and stuff, and the punks will rise again,” said Greyjoy, who hasn’t been to a music venue in more than a decade, because “the real stuff died a long time ago.”

Claiming that modern music will find its way back on track only during a dark hour for humanity, he said he felt morally obligated to make the Tweet, which is positioned on his feed between a meme of Alex Jones screaming, captioned “Still Make More Sense Than Hillary” and a post calling Stone Cold Steve Austin a coward for retiring early.

“I know punk, man,” Greyjoy said. “Do I have every Dead Kennedy’s record on vinyl? Check. Did I play The Sex Pistols over my middle school PA during the morning announcements. You bet I did. Do I have a Buzzcocks sticker on my Nintendo? Right over there, my man. And if you’ve listened to enough punk, you know the trends. And although things have been tame lately, Trump — and don’t get me wrong, this is going to be a bad four years — is going to have a beautiful cause-and-response effect on the genre.”

When asked if he thinks there’s a possibility that punk didn’t disappear, and that, like before the genre’s legends had cult followings, you just have to dig to find newer bands, he sneered, responding, “I have a punk filter on my Bandcamp page. If something was happening, I would know.”

Returning for the eighth year, U.S. Sen. Rand Paul’s Aqua Buddha Music Fest is offering a super-rare VIP package that includes abduction, being tied to a chair, forced bong hits and a chance to worship at the glorious feet of our Lord and Savior the Blessed Aqua Buddha, who is the senator’s deity of choice and was introduced to us to by a GQ article eight years ago.

VIP package holders can expect to be randomly terrorized throughout the three-day weekend, with the possibility of lucky ticket holders being blindfolded and thrown into the Aqua Buddha shrine, featuring a secret after-festival dance party.

Other benefits include, plinko to determine which federally-funded agency gets cut next, a bench press competition hosted by U.S. House Speaker Paul Ryan and a rock-paper-scissors tournament that determines who gets healthcare for the next year.

But, for Paul, it all comes back to the music. “I couldn’t be more honored to play hacky sack while getting blasted out to the music of Carl’s Jr. Senior, Dead-Headed Strep Child and Cave Boner,” Paul said.

In another move in the “War On Louisville,” Gov. Matt Bevin has signed a bill giving him the power to fire and select members of My Morning Jacket. It also gives Bevin artistic oversight of the Grammy-nominated group.

“As ambassadors of our great Commonwealth, it’s important the band’s message reflects our values,” said Senate Majority Leader Damon Thayer. Sources say Bevin’s first action under the “Make The Jacket Great Again” law will see the replacement of rhythm guitarist and The Roots collaborator Carl Broemel with Sonny LeMair of famed Dick Clark’s Caravan of Stars veterans Exile. “While [Carl]’s been tweeting about impeaching our president, Exile is the pride of Richmond, churning out simply terrific music for almost four decades,” Thayer said. “Hits like ‘Kiss You All Over’ is the type of song that makes our state look great.”

The law also requires retitling much of the band’s catalog, such as their Billboard-topping 2003 album “It Still Moves (at Conception)” with its anthemic lead single “One Big Christmas,” plus opening and closing all live sets with “Gideon.”

“This is incredibly frustrating,” said leader Jim James from La La Studios, where he is recording new solo material and ironing his collection of capes. “The GOP clamors for small, unobtrusive government until they see something they want control over. Plus, we like Carl. Though Exile is pretty clutch.”

Band manager Mike Martinovich of Red Light Management confirmed with LEO Weekly that the band, in an effort of good faith and compliance, acknowledges the “America First” doctrine within the current leadership and has already moved their “One Big Christmas” festival from Riviera Maya, Mexico, to Frankfort. The festival is currently being detained at Miami International.

POV: Millennials and their computers are ruining music

When I was young, music was the purest expression between a man and his companion — a guitar. For today’s youth, anyone with a computer can make up a trendy track and put it out on a cloud somewhere. Why fill the world up with so much static?

I’m no expert on the sounds that kids call music, but it troubles me to hear what the millennials think is worthwhile. Other than John Mayer, where is this generation’s Eagles or Beach Boys? It pains me to discover music that was made by a computer — soulless drivel that fails to connect with the base of human emotions.

As an avid fan of the music, I know a good jam when I hear one, and millennials with their drum machines and keyboards would have no idea what a solid hook is if it hit them in the face. Sampling? To my mind that’s just cheating — you might as well say that you have no ideas to contribute.

Anyone can rap. It’s just talking fast and rhyming words. This morning, I practiced it in the mirror. Nailed it. First try.  What happened to the smooth sultry jams of REO Speedwagon? That’s a band that truly understood how to write a good tune, proficient at their instruments and with a great voice leading the way. There was none of this auto-tuning that millennials think is all the rage now, just unfiltered passion and big ideas.

My plea to the youth of America is to pick up a real instrument. Learn a skill instead of just pushing a button on a video game machine and calling it a song. Get out there and work for it. That’s the problem. Not one wants to work for anything anymore… more on that though next week.

Music needs to be made great again, and millennials are everything that’s wrong with it.

I’m Bill Lamb and that’s my Point of View. •

On a related note, Lamb has agreed to become a reoccurring columnist for LEO in a new weekly series called Bill Lamb Yells At Clouds, in which he provides all the sizzlin’ Baby Boomer takes you can handle.