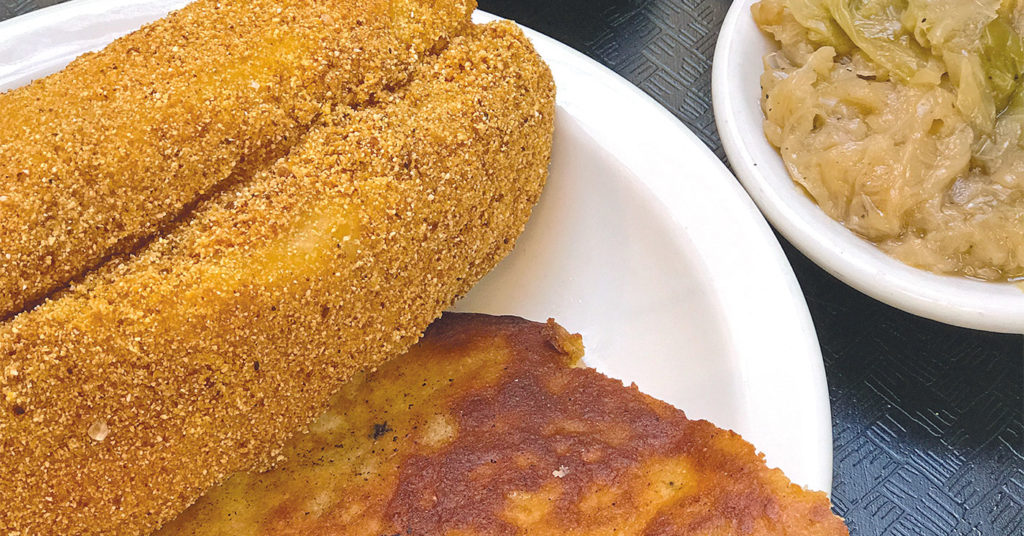 We’ve got a great idea to restore vibrant commerce to Louisville’s West End, and it doesn’t have anything to do with Wal-Mart or a hip food park.

No, our plan is much simpler: We start by erasing that infamous and wholly imaginary wall along Ninth Street. We go to The West End. We make friends. Then, we give our business to the local institutions that are already serving the community with pride.

I can’t think of a better place to begin than Irma Dee’s, a charming, bright, little cafe that opened a few weeks ago on a main street in the city’s Parkland neighborhood.

Serving hearty “meat-and-three” fare with a soul-food vibe, Irma Dee’s opened last month on 28th Street between Oak and Dumesnil streets, which puts us in mind of the ancient Louisville story about the Irish cop who allegedly found a dead horse on Dumesnil but had to drag it over to Oak so he could spell his report.

We actually saw a friendly Louisville police officer in for lunch the other day, and a Metro council member, and a happy crowd of other hungry folks, too, all lining up to be served by Irma Dee’s cordial, smiling staff in their trim black uniforms.

Before we move on, let’s clear up one thing: A lot of us here in Louisville may not be familiar with the concept of “meat-and-three,” a culinary form that’s a bit more common farther south. Memphis has plenty of meat-and-threes. So does Atlanta. Here, though, Irma Dee’s, and the similarly appetizing Shirley Mae’s Cafe at 802 S. Clay St. in Smoketown, are the only avatars of the genre that I know of.

So, what is this meat-and-three? The Local Palate website sings of it lyrically, lovingly describing the meat-and-three as a casual restaurant with a down-home, cafeteria-style atmosphere and unapologetically Southern fare, where you get one meat and three sides, in the form of vegetables, beans, or grains, biscuits, cornbread or a roll.

Twenty-one lunch and dinner entrées, served with two sides and bread, are mostly $9.99 for such varied treats as rib eye, salmon croquettes, catfish or cod, pork chops or pig’s feet; a turkey rib, T-bone or rib tips will take you up to $10.99, and a feast of chitterlings, if you’re so inclined, tops the menu at $11.99.

There’s also a cheeseburger or chicken tenders with fries, and chicken wings from $3.49 for six pieces to $43.99 for a hundred pieces, enough for a party.

When I dropped in with my pals, Vicki, Jon and Mark, for lunch the other day, though, there was no menu in sight. As is the practice with meat-and-three, the menu was on display on the serving line, where you could observe a selection of fried pork chops, fried chicken and fried catfish, salads, tempting desserts and a dozen sides.

Our compliments to the fry chef: Both fried catfish ($9.99) and fried chicken ($9.99) had been fried with skill, achieving a pretty, crisp, golden-brown crust with no burned spots and no remnant of grease. A thin but sizable catfish fillet was crusty with a cornmeal breading that formed a tight cloak and added a subtle complementary flavor to the mild, not at all potentially muddy-tasting catfish. Three fried chicken pieces — whole wings — bore a lighter coating, a thin seasoned flour dredge. They rated as very good, but a little more crunch and flavor might have brought them closer to fried-chicken nirvana.

Breakfast for lunch, scrambled eggs and toast (a thrifty $2.99), showed off the kitchen’s command of the basics. It isn’t easy to get scrambled eggs just right, but theirs were on point, a generous mound of large, moist but not runny curds, carefully seasoned with just enough salt that there was no need to call for more. Even grocery-store white bread becomes a treat when it’s toasted just right, crisp and hot.

When you sit down to a table filled with Irma Dee’s sides, bear in mind that soul food tradition differs from your hip upscale gastronomy: You’ll find no crisp, al dente veggies here, but simple fare, cooked with love. Green beans, cabbage and mashed sweet potatoes all scored. Simply prepared, warm and creamy macaroni and cheese also hit the spot, as did the crisp, savory cornmeal pancakes served in lieu of cornbread.

Oversize slices of sweet, tangy lemon cake and chocolate cake with coconut, caramel and chocolate icing, $2.64 each, wrapped up the meal with an exclamation point.

Our tabs each hovered around $10, and I felt no qualms about thanking these good folks with a 50-percent tip. We’ll be back. I hope you go, too.