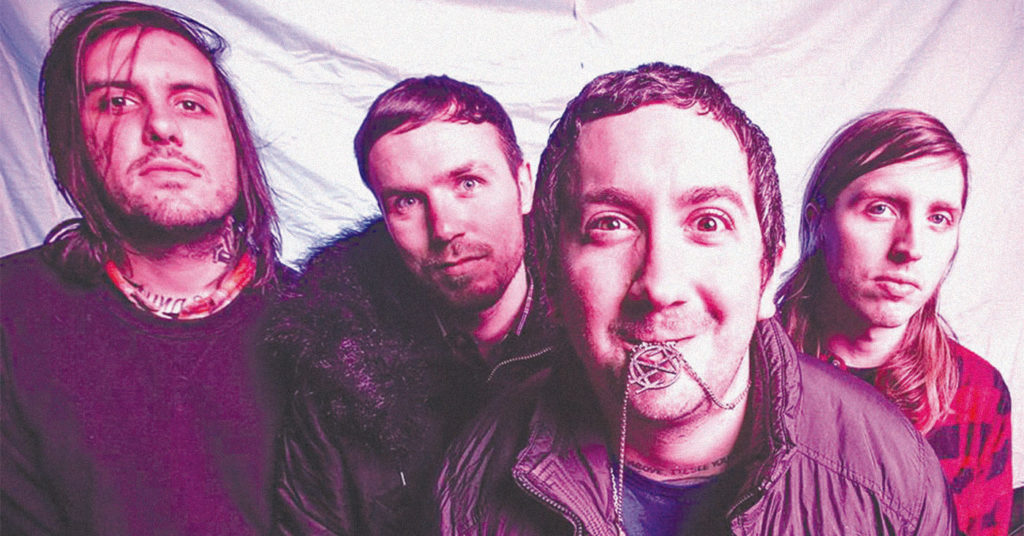 Domenic Palermo’s past continues to follow him. On tour with his band Nothing, he was recently barred entry to Australia because of a conviction involving a stabbing in 2000, for which he served two years in prison.

“The band played as a three-piece,” Palermo said, adding that his promoter had alerted the Australians about his record. “They’re just tripping. I haven’t had a case since then — no arrests. It’s hard to come up on my [criminal] records, so the promoter told them.”

With its sophomore full-length, Tired of Tomorrow, Nothing offers an album with the kind of world weariness that comes from experience, a shoegaze affair that blends big metal ideas and deep textures — indebted both to acts like Helmet or Hum as well as to My Bloody Valentine.

“The whole thing started [by] throwing caution to the wind,” Palermo said. “I want to make beautiful music, and I don’t really have any borders or lines to pass. I feel like we got more comfortable with ourselves. It’s always an experiment. It’s the one pure way for doing this kind of thing.”

Growing up in the Philadelphia punk and hardcore scene, Palermo spent his formative years performing in the band Horror Show, which released a pair of EPs on Deathwish Inc. Palermo didn’t stop there, working briefly with the band XO Skeletons, all of which ended in 2000 when his aforementioned arrest happened.

“As you can imagine, two years locked up in a prison has some effects on you,” he said. “I mean, it had its positive and negative effects, for sure. A long time of isolation is never good for anyone. It straightened me out a little bit. If that didn’t happen, something worse probably would have. I got some time to calm down. I read and wrote a lot. It gave me a lot of motivation to eventually come home and be able to get to work and start taking things a little more seriously.”

In prison, he read a range of topics, including Russian philosophy, French existentialism and the Beat movement. Each is manifested in his music, from the creeping melancholia of the instruments to Palermo’s lyrical content, which often espouses the search for meaning and living in the moment.

“I always say that there is no time for the modern man to read, unless you’re a prisoner,” Palermo said. “When we’re on tour, it’s not the same. I hold books for like months now.”

After prison, he moved to Los Angeles, for a change, but didn’t find it. “At the end of the year, I was kind of at my end,” he said. “I kind of hit rock bottom. I took a shot at putting some songs together and just maybe make a demo tape, and just say fuck it. It went over well, and here we are — I’m kind of trapped with it now.”

In 2011, Palermo release Poshlost, the first recording under the Nothing moniker. An EP, Poshlost serves as a stepping stone between Palermo’s hardcore history and the hushed shoegaze urgency of his later work. Palermo evolved through restraint, producing a sound slower and more tightly coiled than his previous work, but with a tenacity befitting his punk roots — something that continued through the next two EPs, Nothing’s debut full-length Guilty of Everything and coming to an apex with Tired of Tomorrow. Altogether, Nothing has generally been an expression of Palermo’s interests, although he has found a collaborator in guitarist Brandon Setta, who joined after Poshlost. While the band has weathered several lineup changes, Palermo still tries to keep it open for collaboration.

“It’s been a ride,” he said. “I try to keep everyone’s opinion involved. I know how I would feel if I didn’t have a say, and it’s not really welcoming. I try to keep everything open for democratic decisions. But if a decision has to be made, I still have that power. At the end of the day, it’s all on my head.”

While the band currently calls Relapse Records home, they were poised to work with Collect Records, a label backed by notorious pharmaceutical executive and entrepreneur Martin Shkreli, best known for the exorbitant and cost-prohibitive increase he imposed on AIDS medication or as the sole owner of Once Upon a Time in Shaolin, an unreleased album by the Wu-Tang Clan. That is, until Palermo did some research.

“This was before Shkreli was known for any of this,” Palermo said. “It was only a couple of days after that before the HIV drug increase. This thing was no money for him, but he wanted some sort of credibility, and I’m not letting him do that off my back. I have friends that are HIV positive. I’m not going to help this guy get his cool points that he was never going to be able to buy. Fuck that. It’s the one thing I can do to fight off guys like that, is to say fuck off.”