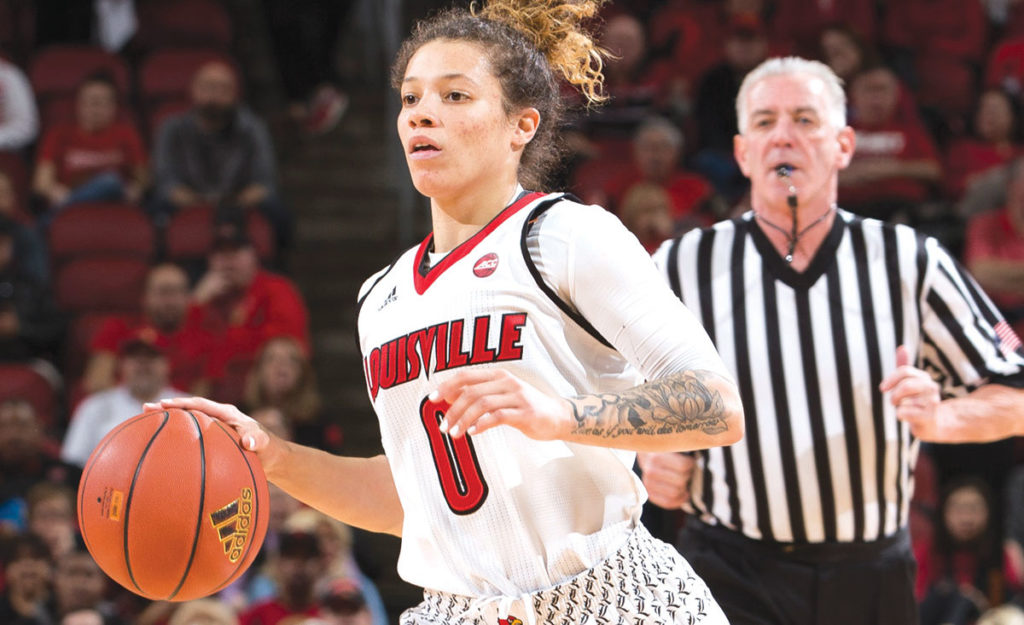 The NCAA Division I women’s basketball tournament begins on Friday with a spoiler alert. … Ready? The University of Connecticut is going to win.

It’s hardly an M. NightShyamalan twist. The Huskies have won the past four championships and an NCAA-record 107 games in a row over 2 ½ seasons.

To put it in terms for LEO Weekly readers, the women’s NCAA Tournament is like Mitch McConnell running for re-election. Hope all you want, but you know he’s going to win. The drama is in how much of a fight his opponent puts up. And maybe — just maybe — something unexpected will happen.

The University of Louisville (27-7) knows that feeling.

In the 2013 tournament, the Cardinals shocked defending champion Baylor, which was led by 6-foot-8 star Brittney Griner, 82-81. The Cardinals, led by Shoni Schimmel, made it all the way to the championship game but lost to — you guessed it — Connecticut, 93-60. That started UConn’s current four-year stretch of titles.

This year the Cardinals go into the tournament in better position despite coming off an 84-73 loss to Notre Dame (29-3) in the Atlantic Coast Conference Tournament. That loss snapped UofL’s seven-game winning streak.

The winners meet Monday to advance to the Oklahoma City Regional.

UofL women’s coach Jeff Walz said he sees positives in hanging with Notre Dame, a No. 1 seed in the tournament, despite turning over the ball 18 times.

“We’re excited about what’s in front of us,” he said. “Now it’s just a matter of being able to put an entire game together.”

Walz said the Cardinals are expecting to have senior point guard and ball handler Briahanna Jackson back for the NCAA Tournament. She has been out with back spasms and missed the ACC Tournament. The Cardinals were already thin at point guard after losing junior Arica Carter for the season after she had surgery to correct a sports hernia.

“Our crowd is really important to us,” Walz said. “We’ve been very fortunate to have one of the best attendances in the country the past several seasons. It’s great to have them there. We have a very knowledgeable fan base of loyal fans.”

The winners meet Sunday and the winner of that game advances to the Lexington Regional tournament at Rupp Arena on March 24 and 26.

Since beating Louisville in that championship game in 2013, the Huskies have not lost in the tournament and only one game total — a regular-season game to Stanford on Nov. 17, 2014.

Opinions differ on whether having such a dominant team is good for the sport — like Tiger Woods for golf — or a turnoff for fans. At least when the Harlem Globetrotters thumped the Washington Generals all those years, they threw in some water buckets filled with confetti.

The Huskies just dominate. Only six active women’s players know what it’s like to beat UConn — five from Stanford and one from Baylor.

Still, the Huskies (32-0) weren’t supposed to be this good this year. Last year’s title was going to be the end of an era and the start of what passes as rebuilding for UConn.

But UConn came out winning and hasn’t stopped. Despite playing a schedule that included nine teams ranked in The Associated Press Top 25, the Huskies have beaten opponents by an average of 32.1 points.

Worse for everyone else, the Huskies just seem to get better. They won the American Athletic Conference title with a 100-44 victory against South Florida as sophomore forward Katie Lou Samuelson scored 40 points — including 10-for-10 from 3-point range.

“For the most part this season, when Lou gets it going early and makes some shots early, it just changes everything for our team,” UConn coach Geno Auriemma told reporters after Monday’s victory. “She just has the ability to blow wide open, and the confidence that we get from that spills over to everything else.”

The Huskies have won 11 titles in 32 seasons under Auriemma with six perfect seasons. He is 987-134 overall at UConn, and his .880 winning percentage is an NCAA record.

Before Auriemma came to UConn, the team had one winning season.

But there are still 62 tournament games until UConn meets someone in the championship game on April 2 at American Airlines Center in Dallas.

What would it take for that someone to knock off UConn?

“If that opportunity presents itself, you have to go in confident,” Walz said. “You can’t be scared and have to find out a way to win.”