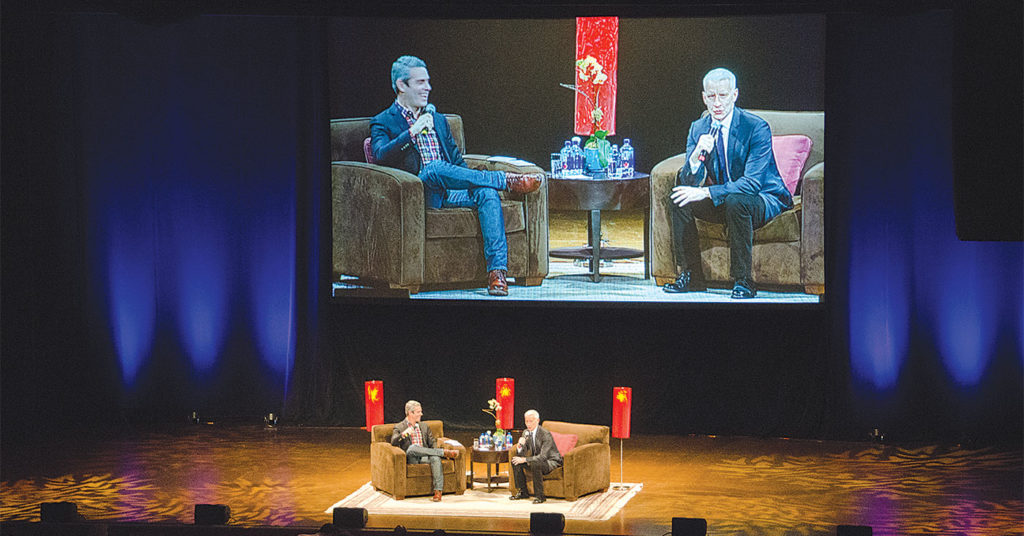 Next Saturday, the Louisville Palace is graced by two media legends, both Emmy Award winners, in CNN anchor Anderson Cooper and producer of the “Real Housewives” series and “Watch What Happens Live” host Andy Cohen. The two, friends for 20 years, are the yin to each other’s yang. Where Cooper is introverted and pensive, Cohen is outgoing and talkative. It’s the perfect set up for their odd-couple speaking tour, during which the pair share stories about their time in their respective trenches. They each took a few moments to talk separately with LEO about themselves, their appearance and how to interview.

LEO: Why do you think your friendship works so well?

Andy Cohen: We have an interesting chemistry. We have similar lives even though he’s on news and I’m in entertainment. We’re both meeting a lot of interesting people. That’s the whole point of the show. It’s like going out drinking at a bar with us. It’s like hanging out with us and having a lot of fun.

As professional interviewers, what constitutes a good question and why?

Cohen: I think someone that challenges someone about their views. It depends on who you’re talking to. At the debate [between Donald Trump and Hillary Clinton, for instance], there was a lot to challenge both of them about and [Cooper] just went at them both.

When do you know if an interview is going off the rails, and how do you get it back on track? Is it even important to do so?

Cooper: For the most part, if something goes off the rails, that can be telling, that can be interesting, that can be funny. If someone doesn’t answer the questions after asking them four or five times to try to answer a question, that tells the audience something if they’re trying to be evasive. I think it’s good not to have too many rules or preconceived notions going into when you meet someone or interview someone.

Cohen: It depends on the situation. Sometimes if something goes off the rails, it’s even more interesting than if it’s on the rails.

Is it ever appropriate to be confrontational in terms of tackling difficult to broach subjects or is that circumstantial?

Cooper: It’s possible to be polite but push someone for an answer or continue to return to a question that they haven’t answered. But that’s part of the job: confronting someone with facts or a difference of opinion. Not my opinion, but if the story warrants it, someone else’s opinion.

How much of your speaking tour audience is ‘Housewives’ fans vs. CNN news junkies? Do you travel well together?

Cooper: It’s a pretty wide range. It’s a lot of married couples. It’s a lot of boyfriends and girlfriends. It’s a lot of women who are going out with their other girlfriends for a ladies’ night out and drinking some wine. Usually the audience has been drinking a little bit, and we certainly encourage that. Andy drinks on stage, I’m not a big drinker. We want it to just be a fun night of hanging out with us and telling stories.

Cohen: Anderson and I travel great together. I’ve been to Louisville for the Derby, years and years ago once, like 10 years ago, or something. It’s going to be really exciting to go back. I’m really excited. I loved it. What’s not to like? Everything is steeped in… what is the name of that bourbon I was drinking? I love Maker’s. I love it all.

What do you hope to see as your legacy?

Cooper: I wouldn’t presume to think that I’m that important to think I have a legacy in my career. I just hope that I have a legacy of friendships with people, and that I was a good friend to people. If I helped out people who needed help. That I worked hard and did my best.

Cohen: Oh, wow. Just that I made anybody smile or took them away from their problems, or that they had a friend in me. •