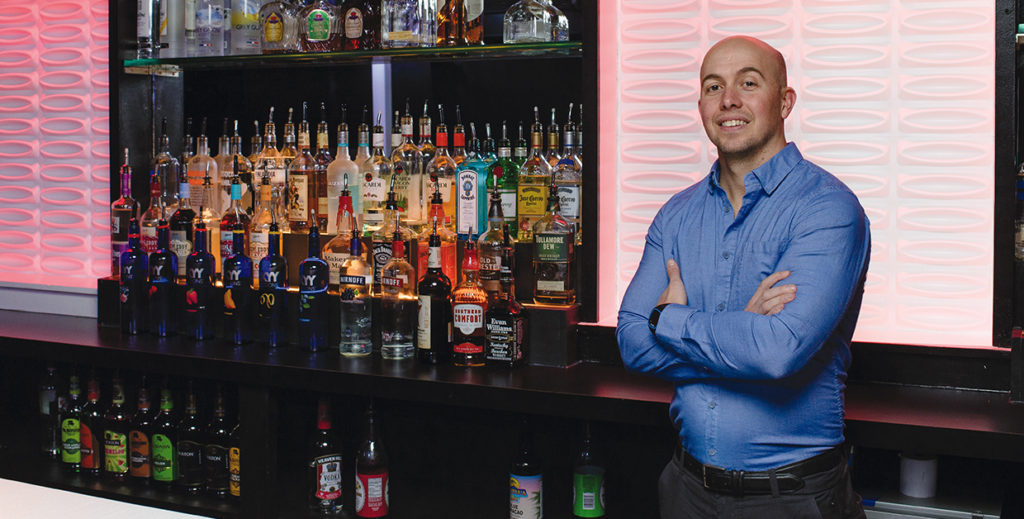 When members of the LGBTQ community are planning a night out on the weekend – or on a weekday for that matter – we admittedly have an abundance of choices. The city is lucky to boast a diverse and eclectic array of various watering holes oriented for LGTBQ folks, and while you truly can’t choose incorrectly, there’s nothing in town quite like PLAY Louisville. Having just celebrated its three-year anniversary in town, PLAY’s sprawling Butchertown facility is without question one of the cleanest, safest and most entertaining spaces the city has ever known.

PLAY Louisville is the offspring of PLAY Nashville, which has been in business for 14 years. Five years ago, it was becoming more and more apparent that the PLAY in Tennessee was seeing a distinctly high amount of visitors from Kentucky, specifically Louisville, pass through its doors. That, coupled with the undeniable fact that  Louisville’s LGBTQ culture was on the brink of exponential growth, led the PLAY team to begin scouting for a new location in Louisville.

To the tune of $2.5 million, the team purchased and completely built out PLAY’s current building at 1101 E. Washington St., transforming a dusty warehouse into a state-of-the-art nightclub. At the forefront of this effort was one of PLAY’s now most recognizable faces: Micah McGowan, co-owner and operator and one of the city’s greatest LGBTQ allies.

In Nashville, McGowan had owned a live music venue before he sold his business to pursue other endeavors. At the urging of his friend and now business partner Todd Roman, he began bartending at PLAY Nashville while entertaining thoughts of perhaps opening his own place again someday. Logically, the pieces fell into place, and the bar McGowan ended up opening was PLAY Louisville after he and his wife, Dana, relocated to Louisville, which McGowan touts as “the best decision we ever made.”

Though McGowan is straight, he emphasizes that LGBTQ culture is inextricably part of who he is. “I’ve always been in the gay community ever since college,” he says. “Growing up, I guess I knew people who were gay, but they weren’t out in my hometown. But I always have had an affinity for hanging around people who may be the minority. And I’ve always had a place for that in my heart.”

McGowan’s steadfast compassion has manifested at least partially in PLAY’s sincere generosity to the LGBTQ community and beyond. One of the central philosophies of PLAY Nashville has always been giving back – it has raised over $1 million since opening – and McGowan was sure to continue that ideology in Louisville. PLAY regularly will donate its space to nonprofits and allow the organizations to keep the entirety of door proceeds from the event. Consequently, groups that may not have the funding or ability to rent a true event space are able to hold fundraisers and boost awareness without breaking the budget. It’s true benevolence on the part of PLAY and something McGowan sees as integral to the business. “That’s kind of the motto we have at PLAY – to try to help everyone, not just ourselves,” he assures. “And when you help everyone else, it helps you too. It’s a pretty simple philosophy – reaching out and helping others and trying to make a difference.”

It’s a staggering amount of money, and in addition to speaking to PLAY’s altruism, it illustrates the sheer amount of organizations and groups doing important work in the community. PLAY hosts roughly one event per week with proceeds ranging from a couple hundred dollars to $50,000, which was raised on the night of their benefit for those affected by the Pulse shooting. Since opening, McGowan attests that he and PLAY have worked with at least 40 different charity organizations.

“Louisville is a smaller population [than Nashville], but I feel like there’s way more organizations,” he asserts. “Louisville’s a really progressive city – especially in a really backwoods state. So as soon as we moved here, we wanted to locate and get plugged in with all the organizations because we were like, ‘We’ve put a lot of money into this place and we want to create a community center where people of all different organizations can come and raise some money and bring awareness to their different groups.’”

In addition to PLAY’s unparalleled philanthropy, it is also committed to being a safe space for all  members of the LGBTQ community and was in fact recently designated as a Safe Harbor where those affected by discrimination or hate crimes can come for help. Moreover, they have made a concerted effort to be a nightclub that welcomes everybody – including transgender individuals, people of color, lesbians and others in the rainbow. “We feel oftentimes that women are neglected in the ‘gay’ club,” McGowan emphasizes. “When we first opened, one of our big things was also targeting the lesbian demographic. Thursdays have always been ladies’ night. We came in and gave a place for drag kings to perform – that was really important to us because inclusiveness is what we’re all about.”

And that inclusiveness works very much in tandem with the overarching compassion and equality of Louisville. Though there is, as there always will be, work to be done, Louisville has made impressive strides in the last several years, which is not lost on those like McGowan who have relocated here from bigger cities. “Nashville’s a bigger town, but Louisville has a stronger LGBTQ presence,” he contends. “The city comes out so much more. We do more business in Nashville just because of sheer volume, but I have to say Louisville is more progressive. There’s so much more involvement with the mayor’s office, with the ACLU, with Fairness – there’s a lot more involvement in Louisville. Not that there’s not a lot in Nashville, but Louisville is really a forward-thinking city.”

Looking ahead, PLAY plans primarily to just keep on being the best it can be by focusing on offering a top-notch show – between PLAY Nashville and Louisville, the company has booked about 80 percent of the contestants that have ever been on “RuPaul’s Drag Race” – being the cleanest it can possibly be, maintaining an exceedingly friendly staff and providing a safe space for the LGBTQ community to come out, have a good time and maybe raise money to do some good. “We want to continue to be the hottest place, but we feel that we owe it to the LGBTQ community to give them the best place we possibly can,” McGowan says of PLAY, which just completed a $70,000 renovation. “And every two or three years, we’ll plug money back in to try to do something to update it and keep it fresh.”

Though PLAY is still trying to grow its weekday business, 2016 was up 30 percent on 2015, and 2015 was up a solid percentage on 2014. It’s steady growth and all McGowan and his team hope for. They are not a greedy corporation out to make money off exploiting the community but rather authentic individuals dedicated to providing a fun and safe place while also cultivating the growth and development of Louisville’s robust LGBTQ community. And that translates to a welcoming, genuine environment that’s impossible to deny. No matter who you are, you have a place at PLAY. “I’m glad everyone feels welcome to come here,” McGowan says. “I even have straight friends who are a little hesitant at first to come to a gay bar but after they come, they’re like, ‘Dude, I’m coming back!’”