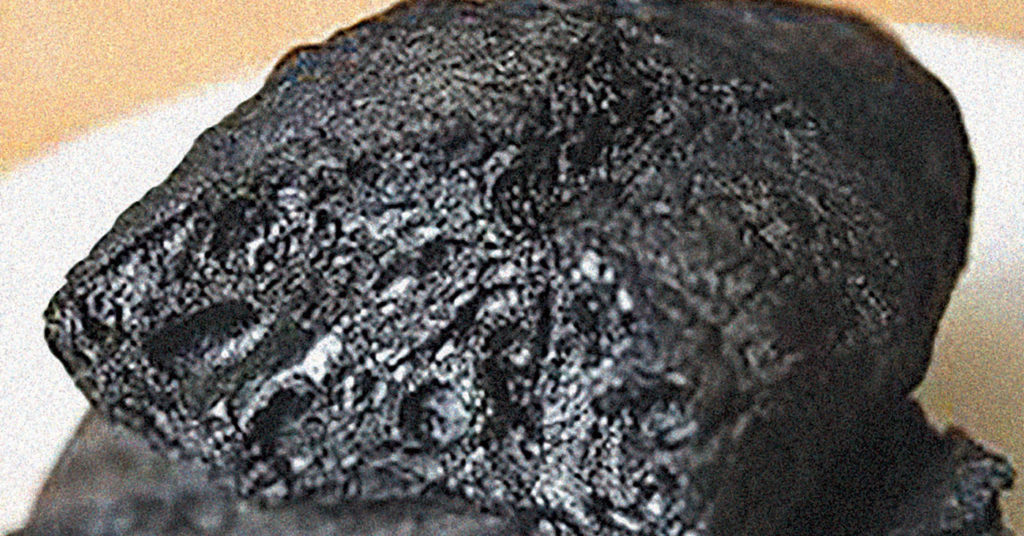 U.S. Sen. Mitch McConnell has been famously declining to meet with his constituency this year. He has refused to schedule town hall-style meetings in favor of a pay-to-play setup in which Mitch will sup with, and take brief questions from, an audience gathered by invitation and willing to fork over for tickets. Chambers of Commerce, business and trade organizations and well-off Republican faithful tend to get this favored, if brief, exposure.

But plenty of savvy citizens — in particular his Douglass Loop-area neighbors who voted against him by a substantial margin in his last electoral outing in 2014 — know that when Mitch is in town, you can generally spot the jowly lawmaker, the bill of his baseball cap pulled down low, skulking through the aisles at Wrocklage Avenue Kroger, or picking up an order of country ham at Morris Deli.

Until now, that is.

Mitch is no longer welcome at Morris Deli, LEO Weekly has learned. The jowly senator has been banned from the premises forever. Management declined to be interviewed about the matter. But Wanda McBoatface, a Highlands soccer mom who handles PR for the iconic local deli in her spare time, told us that the problem wasn’t entirely due to the senator’s behavior, even if he is an extremely picky customer who never tips.

The real problem, she said, was the crowds of angry liberals that follow the senator into the tiny deli. “They’re so loud,” she said. “Yelling ‘Mitch, Mitch, take our call,’ and trying to get him to answer questions. Everybody knows he never answers anybody’s questions. He just scowls, or if you really catch him, answers a completely different question than the one you asked. He’s very good at that.”

The chanting crowds drive regulars away, she said, and they never buy anything. Then a light bulb went off: If Mitch wasn’t there, the crowds would go away. “Once we realized that we never really liked him anyway, it was an easy call.”

Donald Trump is president. Get used to it. For The Donald, the presidency appears to be just another brand. Trump Hotels? Trump Meats? Trump University? Trump Casino? The man’s name is his brand, and he does love to see it hanging up there, in all caps and solid gold. So, whether we like the man or don’t (full disclosure: We don’t), duty calls us to head out to the countryside to review TRUMP’s Bigly Bistro, the first local unit in the 100-link chain that Trump’s family — er, sorry, blind trust — has launched since the inauguration.

The venue is yuge, of course, and the decor is all gold. Well, gold-plated, anyway. Would you believe gold paint? Flat-screen televisions offer a 24-hour feast of Fox News, Limbaugh, O’Reilly, Coulter & Co., all turned up loud. White tablecloths are set with gold-plated flatware and gold-rimmed stoneware, and a larger-than-life golden bust of The Donald, wearing a laurel wreath, gazes over the dining room from a pedestal.

Chef Sonny Bevin’s extensive menu covers a broad fusion of Southern and rural influences with country-club standards and a distinct whiff of Jersey Shore Italian. Over 100 entrées (labeled Don’s Bigly Plates) range in price from $2.99 (for a bologna sandwich on white bread) to $299.99 (for a yuge well-done prime rib slathered in foie gras). There’s no bar in this dry county, but Rocco, the bouncer, can make special arrangements for a price.

We decided to stick with the fare of the country, and enjoyed fair-size orders of simple, barely seasoned fried chicken and fried catfish, with sides of green beans, cabbage, mashed potatoes, macaroni-and-cheese, and collards. Why, yes, that is all the same stuff we recently enjoyed, with a lot more spice and flavor, at a West End meat-and-three. Southern, country, soul food: Set aside the politics, and foodways start to look a lot alike.

Louisville not a ‘Southern City,’ chefs schooled on local geography

What do you suppose it would be like if suddenly, just like that, Louisville restaurateurs belatedly discovered that the city is not actually, well, Southern.

Consider these simple, historical realities: Kentucky never seceded from the Union. President Abraham Lincoln was born just a few miles south of the city, in a little log cabin near Hodgenville, Kentucky. Louisville housed a major Union Army fort during the Civil War, and most of the city’s German and Irish population stood staunchly against slavery and for the North.

For many of us who grew up in Louisville, particularly if we’re old enough to remember watching with horror as the civil-rights struggle played out violently in Birmingham, Selma, and across the entire state of Mississippi, the idea that Louisville is “Southern” strikes us as hilarious, but also a bit offensive. Heck, we don’t even have Southern accents, or at least not too much.

But something funny happened as we evolved from a city full of people who loved to eat out into a gastronomic mecca that gets noticed in national food and travel media: A bunch of restaurateurs, realizing that “Southern” cuisine was getting to be a hot thing, decided to jump on that train before it left the station. If Southern is a trend, we can be Southern too.

It’s fake, though. So let’s just imagine what would happen if, in a sudden burst of self-actualization, the city’s faux-Southern eateries suddenly discovered the error of their ways and dropped that shtick.

Ed Lee might declare 610’s new thing “Korean-Midwestern” and would quickly head out on a culinary research visit to Iowa. Doc Crow’s might become Doctor Crow’s, and its owners, rediscovering their heritage, would fuse Southeast Asian flavors into its barbecue-centric cuisine, to critical acclaim. Silver Dollar would point out, truthfully, that its Southern-seeming chow was really California cuisine all along. And Finn’s could rename itself Finn’s Northern Kitchen without missing a beat. Hey, it could happen!

Making a commitment to consuming only locally-sourced and natural products can be difficult. Sure, it’s easy to go to a farmers market on a Saturday morning to get locally-made soap. But it isn’t as easy to find a locally-sourced toothbrush.

That’s why I make my own.

But you can’t always do that, meaning sometimes you have to compromise. (Trust me, finding locally-sourced bristles is not an easy task!)

Local, organic beef and chicken are becoming more and more attainable, though. We even have a local, craft butcher now. I have no trouble finding local, artisan breads and vegetables, the latter of which I can grow on my own, to some extent, assuming locally-sourced seeds can be procured.

But sushi? I went to just about every sushi bar in town, and not one offered locally-sourced sushi. It boggles my mind — I mean, it’s 2017, people!

Well, that lack of locally-sourced sushi ends now, and it’s all thanks to LouShi, a new sushi bar that serves only Kentucky-harvested sushi! The rice? It’s from Campbellsville. The nori? Yep, grown in an indoor farm in Lexington. All the cucumbers are grown right here in Louisville. But most importantly, the fish comes from Kentucky streams and rivers.

As I sat down for my first meal at LouShi, I noted a rather pungent smell emanating from the sushi bar, a sure sign of local, fresh fish. I knew I was in for a treat when I noticed the sushi chef hard at work behind the bar making a Crappie Dynamite Roll, one of the house signature dishes.

As I scanned the menu, I found all sorts of tasty maki-roll options: the Shelbyville Roll (made with cucumber, eel sauce and fresh drum); the Floyds Fork Roll (with cream cheese and smoked sauger); the Mighty Ohio (made with gar caught by local fisherman along the banks of the Ohio River), and the Beargrass Special (featuring raw, Beargrass-raised panfish topped with freshly-harvested shad roe).

My mouth watered as I perused the fine, local options. Just think: panfish right out of Beargrass Creek! Why, I could hardly wait to taste the inner flavors of Louisville, and from a creek that runs right past my neighborhood. I mused, “Could it get any more local than this?”

I started with the eelgrass salad, which also contained chopped freshwater mussels harvested from the bed of the Ohio River. Eelgrass is, of course, one of the most common types of vegetation found on the river’s bed, so pairing it with mussels that grow right next to it was genius. The sweet eelgrass made for a great companion for the musky-tasting shellfish, which seemed to have a slight glow. Not sure what that was about.

Next, I opted for flathead catfish sashimi, which came to me in three rather dense chunks, garnished with pickled ginger and a dab of wasabi. The catfish, which I believe the chef said came from Taylorsville Lake, had a full-bodied flavor that made me gag at first. But, knowing that anything locally sourced is better than imported, I plowed through the three pieces of fish, bite by bite.

I of course couldn’t resist trying the Beargrass Special roll for my main entrée. As the roll was placed before me — the server was wearing a surgical mask — I realized where the pungent smell was coming from. It was this roll! It must be the freshest, locally-sourced sushi in the city, I thought to myself.

The roll was so ripe that I think I may have heard a hum coming from it. I also never knew panfish was such an odd brown and green, I must admit. Hey, I guess that’s a sign it’s fresh — cooked Alabama panfish would never look (or, hopefully, smell) this way.

As I took my first bite, my stomach convulsed, but I continued on, knowing it was my duty to savor this fresh, local bounty. The flavor was sort of a blend of raw sewage and horse bile, with just a hint of smoked trout. Interesting. Meanwhile, the roe seemed to be moving, which I thought odd. It had a lingering sweet taste that resembled the stuff grade-school janitors use to clean up vomit. Imagine that smell, and that’s the flavor I’m describing.

When I checked out of the hospital three days later, I couldn’t wait to share the news about this unique new eatery. And I will definitely be going back to LouShi, just as soon as I can eat solid food again and stop going to the bathroom 12 times a day.