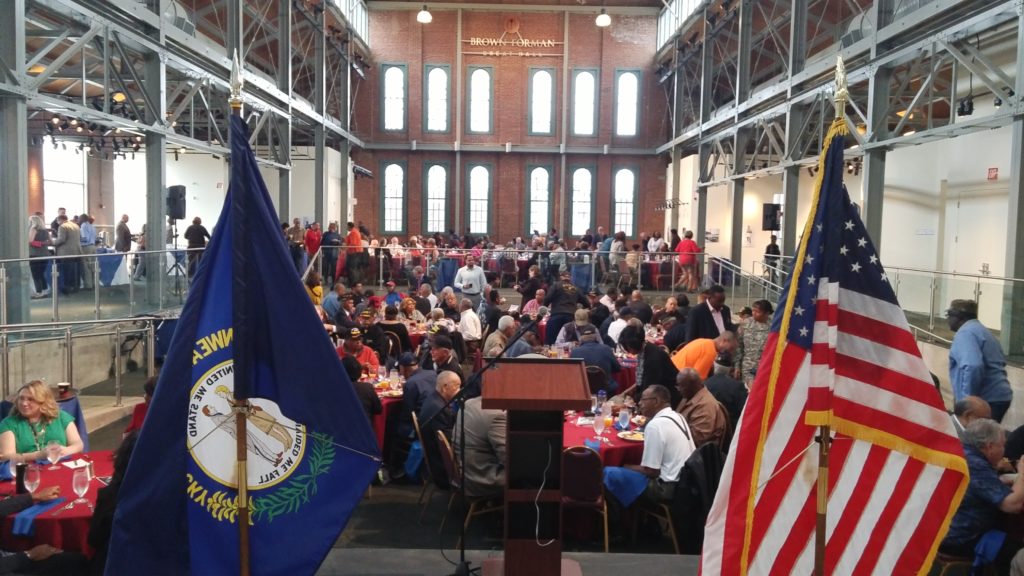 With Facebook groups dedicated to “the hunt for Mitch” McConnell, the senator’s constituents upset by the Republican agenda have been tracking the elusive politician, even showing up outside of his house to voice their outrage. Hundreds of protesters have gone to his ticket-only town hall forums, demanding that he answer their questions.

It was the same for Republicans returning to their districts across the nation.

The experience has been different for U.S. Rep. John Yarmuth, D-Louisville, who also was home for the congressional break.

At the 11th Annual Community Dialogue for African-American Veterans last week at the African American Heritage Foundation, Yarmuth was warmly greeted and spent 90 minutes answering questions and describing the tense atmosphere back in Washington, D.C.

“The Ringling Brother’s Circus went out of business because they couldn’t compete with the circus in Washington,” Yarmuth said, garnering applause.

As much a celebration of service as a town hall meeting, the event drew 215 people.  In these trying times of Donald Trump, many said they were seeking a better understanding of what’s going on in Washington and of how things will shake down to the local level.

Yarmuth not only personally greeted every table, but responded to all questions and comments.

According to Yarmuth, this next year in Washington looks to be focused on healthcare and tax reform. Trump and the Republican party promise to repeal or “repair” the Affordable Care Act.  As the Yarmuth explained, everyone will be affected.

“I think they’re going to find that saying that you’re going to repeal or repair the ACA, is not as easy as it sounds,” said Yarmuth.

Healthcare was a major concern among veterans in attendance. Raymond Wise served 20 years in the Marines, followed by another 20 as a police officer, before settling in with his son in Jeffersonville.  “The health situation needs to be addressed, making sure that veterans are getting the care they’re supposed to,” he said.

Charles Stallard, a Louisville resident and president of Montford Point Marines Chapter 22, is concerned with who is put in charge of that care.  As a Vietnam War veteran, he said, he wants to know who’s going to be the director of the U.S. Department of Veterans Affairs. “What kind of person are we going to get and will they know what vets need?”

The location of a new VA hospital for Louisville also was discussed.

While both Wise an Stallard share concerns regarding healthcare, they’re split in their beliefs of where the new VA hospital should be built. Wise said he believes that a downtown location would be more convenient. Stallard fully supports the Brownsboro Road location, citing how downtown events can cause street closures.  “Older people get confused. That would be a travesty for people who don’t know how to get around downtown,” Stallard said.

Renee King of Louisville, who served seven years in the Army, highlighted a gender disparity she faced.  After returning home, she, along with her family, became homeless for nine months.  There was nowhere to go.

“When I became homeless, there was no place for female vets to go,” she said explaining that there aren’t housing or transitional services available specifically for females. “We served and fought just as hard as the men, if not harder.”

Now, she considers it her fight to help other women and their families, when they come out of the service.