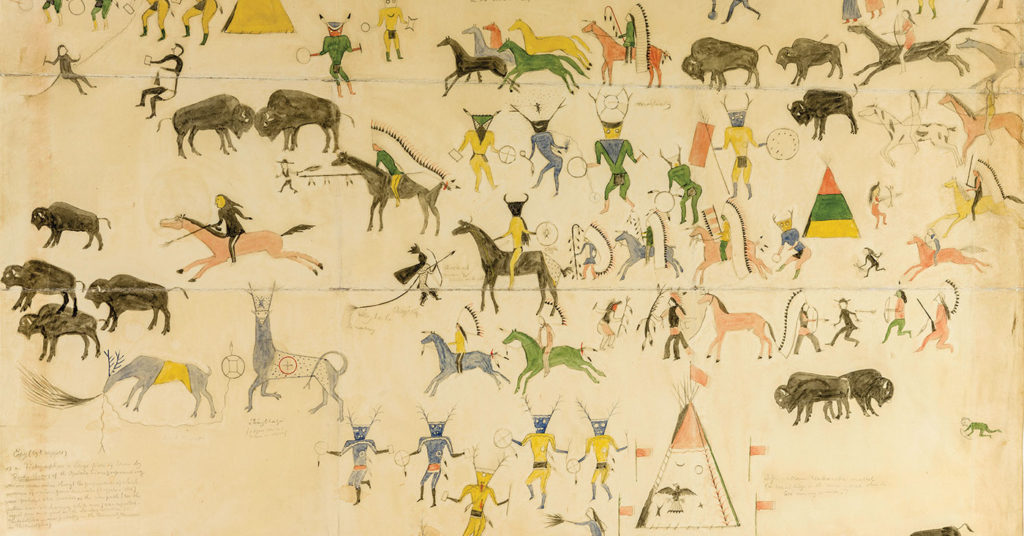 The Lakota people’s name for Frederick Weygold (1870-1941) was One Tongue. At a time when the white man was considered to “speak with a forked tongue,” the mutual respect between the Lakota and Weygold is apparent by this name.

After viewing “Picturing American Indian Cultures: The Art of Kentucky’s Frederick Weygold,” with over 180 drawings, paintings, photographs and objects, it’s evident he deserved this respect. As an artist, collector and scholar, Weygold’s immersion into Native-American culture happened when many in America saw them only as a conquered people.

“Although Weygold’s work as an illustrator, photographer and collector of American-Indian art is highly regarded in Europe, he remains virtually unknown in the United States,” said Kim Spence, the Speed Art Museum’s Curator of Prints, Drawings and Photographs. “In addition to offering new insights into familiar favorites from our American-Indian collection, this exhibition also features examples of Weygold’s paintings and drawings that have rarely been shown publicly.”

Weygold was born in Missouri to German immigrants; Louisville became his home when he was 12 years old. Years later, while attending university in Germany, he became fascinated by Native-American tribes (Germany had a strong interest in Native-Americans, resulting in vast research and collections, although much was destroyed by bombs in World War II). After decades of living abroad, he came back to America in 1902 to go to the Pennsylvania Academy of Fine Arts in Philadelphia. He returned to Louisville in 1908.

His interest continued to grow during his lifetime. Most of Weygold’s contact with Native-Americans was with the Lakota people at the Pine Ridge Reservation in South Dakota. He taught himself the Lakota language, both spoken and sign language.

Weygold was an honorary curator at the Speed Art Museum during his later years and donated his personal collection to the museum. Unfortunately, it was forgotten in storage. “The knowledge died when he died,” said Spence. It was rediscovered when the Speed underwent recent renovations. “We’ve cataloged over 1,000 artifacts. It’s a great resource that we didn’t know was here.”

Initially, the rediscovery of the extensive Weygold collection offered more questions than answers. Spence contacted Dr. Christian Feest, a German specialist on Native-Americans, who eventually became the guest curator for the show. Another resource was Dr. C. Ronald Corum, a research neurophysiologist who became an exhibition consultant, because of his knowledge of Weygold’s research.

The resulting exhibition, “Picturing American Indian Cultures: The Art of Kentucky’s Frederick Weygold,” is a treasure trove, with 75 percent of the artifacts on display for the first time. For those interested in Native-American history, this show is a must see. But Weygold was foremost an artist, one who happened to appreciate a culture not his own. His art is superb; technically difficult and meticulously detailed in a way only an artist who is an interested observer can be (the Chief Red Cloud portrait is an excellent example on both counts). His paintings, especially of ceremonies and pictographs, are full of the details of Lakota life. “He was a gifted draftsman, ahead of his time,” Spence said.

Also on display are works by Native-American artists, such as Little Wolf, a close friend of Weygold’s.

Several special programs are available during the exhibition. Many contemporary Lakota people do not speak their native language; a film about them relearning the Lakota language, “Rising Voices,” is included in the show. The well-researched catalog is an excellent resource for further understanding of the Lakota and Weygold.

“I would be thrilled for an artist from Louisville, an artist overlooked — I hope the exhibition [brings] greater attention to him,” Spence said. “He’s an interesting guy.”