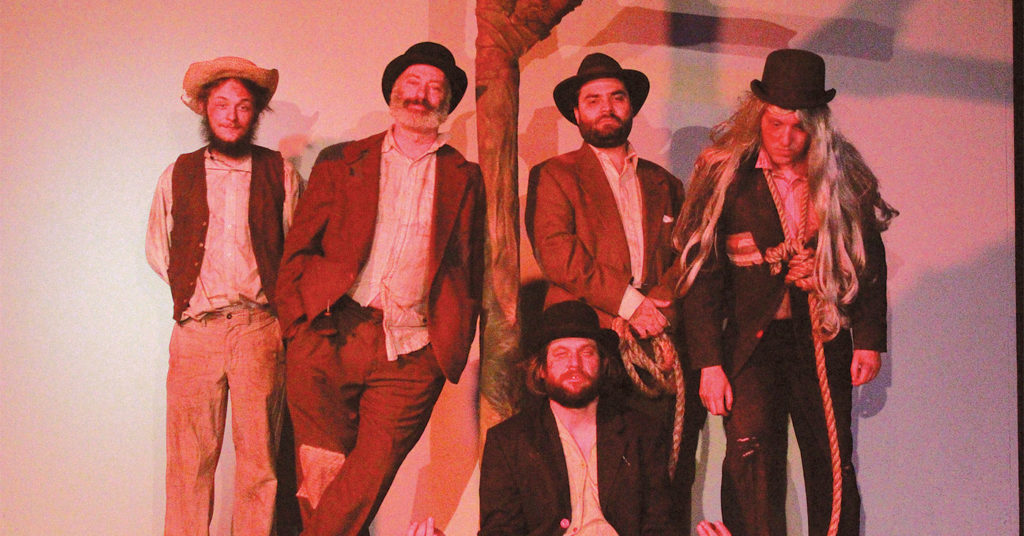 Whether by coincidence, or by design, it was fine timing that The Alley Theater’s new production of Samuel Beckett’s “Waiting for Godot” opened on Groundhog Day. Over the years, lots of folks have noted that Beckett’s play and Bill Murray’s film feature folks who are caught on a hamster wheel of thwarted hope.

Of course, if “Waiting for Godot” had been written for Hollywood, the heroes, such as Bill Murray, would escape in the third act (Beckett’s play only runs two acts).

It would be delightful to see Bill Murray in a production of “Godot.” And it wouldn’t be out of the question: The first U.S. production of the play featured Bert (Cowardly Lion) Lahr as Estragon. Early in his career, Lahr established himself as star of vaudeville and burlesque theater. And “Waiting for Godot” is, in its way, a kind of burlesque show, filled with physical and verbal gags that are laugh-out-loud funny when well-performed.

And The Alley Theater’s version, admirably directed by Spencer Korcz, is very well performed. Over many years, the Alley has focused on absurdist comedy, sometimes delving deeply into pop culture parodies (count yourself lucky if you saw its production of “Point Break” back in 2010), but often tackling contemporary classics, as well (including last year’s production of “Rosencrantz and Guildenstern”).

“Godot” sits right in the company’s sweet spot, and it makes the most of what amounts to a darkly-wonderful buddy story.

J.P. Lebangood and Joey Arena play the tattered tramps (costumes by Anna Shelton) at the heart of the story. Lebangood is the hapless Estragon (aka Gogo), who suffers from bad feet, ill-fitting boots, frequent offstage beating by unnamed assailants, an almost pathological sleepiness and frequent lapses of memory. Still, he has plenty of appetites, and some uninhibited appetites. Arena plays Vladimir (aka Didi), a talkative, image-conscious tramp with his own set of woes — including excruciating pains whenever he tries to pee (mercifully, off-stage).

They are fine foils for one another.

Vladimir is a sharp-minded rationalizer. He contemplates angles and crafts strategies. He speculates about the nature of the unknown Godot. His intellectual fodder includes things like analyzing discrepancies among the four evangelists’ accounts of the crucifixion of Christ — and trying to calculate whether one can profit from an act of repentance. He is seemingly a reliable source of provender for Estragon: his pockets are stocked with carrots, turnips and radishes.

Estragon isn’t as glib as is his partner, but he has a knack for puncturing Vladimir’s trial balloons. If he has little patience for abstractions like repentance (what should we repent, he wonders… “Being born?”), he nevertheless has plenty of ideas. In one of the play’s most darkly-comic moments, Estragon proposes that the two buddies could hang themselves from the lonely tree that defines their landscape. Then, in a sharply argued piece of verbal reasoning (imagine a strange sort of Laurel & Hardy logic), he talks himself out of the idea.

With crack of a whip, the insular world of Didi and Gogo is suddenly penetrated by newcomers. They are joined by Pozzo (Scott Goodman) and his slave, Lucky (aka Pig), played by Andrew Hoehler). Pozzo is a pompous, narcissistic plutocrat equipped with a pocket watch and other goods — all of which are borne by his slave. Lucky, stooped over by the weight of his burden, moves only at the behest of his master. This is a chilling pair of characters. It’s indifference, not cruelty, that drives Pozzo’s cold treatment of his slave — and that indifference is mirrored in Gogo and Didi’s callous curiosity about the slave’s plight and motivations.

The first act scene with Pozzo and Lucky (they return in the second act under sharply different circumstances) is one of the great moments in 20th century theater — and this performance is superb. Goodman’s calmly cheery portrayal of self-absorbed privilege is flawlessly unselfconscious; he owns this character. And Andrew Hoehler delivers Lucky’s famous monologue (a towering monument of dramatic writing) with a ferocious virtuosity that is breathtaking, both verbally and physically. Delivered after a long interval of physically-brutal stopped silence, the monologue requires a perfectly articulated robotic stream of language punctuated by occasional stutter-stops, paired with spasms that resemble a machine getting ready to stall. The moment when Hoehler pulls himself upright and transforms himself into a “thinker” is a formidable piece of acting.

Rounding out the cast, is The Boy (Riker Hill), a fresh-faced, rustic emissary from Godot, whose job is to disappoint Vladimir and Estragon (and who gets pumped for information on each of his visits).

Based on the quality of this production, I’d like to see The Alley mount a cycle of Beckett’s plays — or, failing that, an evening devoted to his short plays, which are seldom produced around here.