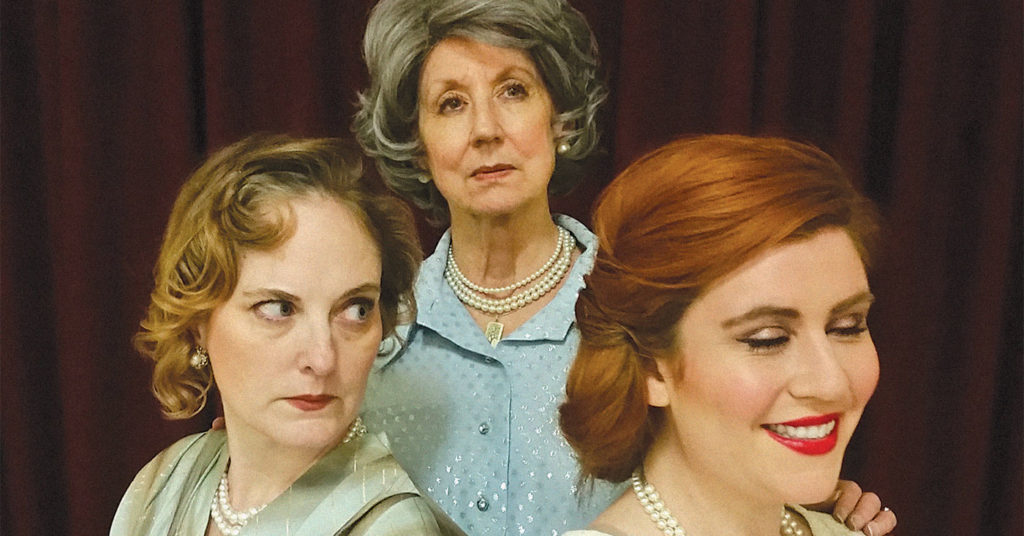 Because the quality of acting is generally high on Louisville stages, it’s easy for a theater-goer to become a bit jaded. But every once in a while, a performance comes along that completely resets the scale. So it is with Rena Cherry Brown’s mind-boggling performance in Edward Albee’s Pulitzer Prize-winning “Three Tall Women,” which opened last week in a Bunbury Theatre performance directed by Steve Woodring.

“Three Tall Women” premiered in 1994, more than three decades after “Who’s Afraid of Virginia Woolf” (and the film version starring Richard Burton and Elizabeth Taylor) turned Albee into a cultural icon. A lesser playwright might have been frozen in place by the extraordinary notoriety of “Who’s Afraid …”

But Albee’s muse never staled, and “Three Tall Women” stands as one of the great plays of our time. It is a riotously-funny play, brutal in its candor and deeply compassionate, but never sentimental.

Brown plays a character known simply as A, a woman in her 90s. Her exact age is a matter of dispute, because, even at this stage of her long and colorful life, she’s the type of person who might prefer to shade the truth by even a year. She’s sharp-minded (notwithstanding a tendency to drift). She’s proud, smart and independent-minded — but now she’s reached the point where her limited mobility and constant toileting crises have forced her to rely on B (Mia Seitz), a 50ish attendant possessed of a wry subtlety and her own carefully couched sense of independence.

The first act finds A and B joined by 20-something C (Carrie Cooke Ketterman), a smug, officious lawyer’s representative who has arrived on a quixotic quest to straighten out A’s financial affairs.

Those financial affairs get short shrift from A, who is determined to maintain her financial privacy — because, after all, everyone is after her money. But A’s other affairs are fair game — and she spins tale after tale of her youth, marriage, sexual life, triumphs, compromises and failures.

It turns out, she’s a sort of geriatric Scheherazade, whose stories are full of delicious tangents and unfettered details that can slip from raucous, raunchy wit to shuddering grief in the course of single sentence. By this point in his career, Albee’s command of language, its pulses, rhythms and textures, was unparalleled. Likewise, his command of tone was at its apex. There are passages of childlike wonder — as when A recalls her love of riding horseback. There are moments that sweep a listener away in sensual poetry. There are moments when the subject turns to sphincters and incontinence.

During the first act, it is largely up to Rena Cherry Brown’s A to bear that energy. And she delivers the sort of virtuoso performance more often associated with, say, great violinists or pianists than with actors — perhaps because there are few roles like this one, and very, very few portrayals of an elderly person, let alone an elderly woman.

In Brown’s performance, every sentence, every word, every syllable, flows so naturally that it hardly seems artful. One moment she plows headlong through a story. Then she plunges into the panicky shudders of looming dementia.

At the end of the first act, A suffers a stroke.

And after the break, Albee’s formidable imagination breaks out in new directions that unleash all three actors to play A in the various stages of her life. Carrie Cooke Ketterman plays her at 26. She’s a good girl, she tells us. She has mastered the art of dealing with men — and knows what she wants from them. Seitz plays the woman at 52 — elegant, prosperous, seemingly in command of her fate, and as happy as she every expects to be. And Brown plays the nonagenarian, a woman who has moved beyond all “the greatest woes” of her life and relishes standing on the just-this-side of the end of life.

In this act, as A, B, and C interrogate and critique one another, Albee delves more deeply and personally into the events outlined before the break — and the three different iterations of character A (joined by the silent figure of their son, who sits vigil at A’s bedside) offer a beautifully coached ensemble performance of one woman evolving through the stages of her life. It’s an ambitious piece of theater — and a great pleasure to watch this cast playing different facets of one complex personality.

In the first act, B, whose job is to see A through to the end, lectures the young C on the importance of comprehending the nature of life and death: “I’d like to see children learn it,” she said. “Have a 6-year-old say, ‘I’m dying and know what it means.’”

This second act is Albee’s finest investigation of the way we “lurch from chair to chair, pillar to post” as we proceed through life, and, in the end, it turns out that his candid exploration of life and death culminates in an existential revelation that is decidedly non-magical. •