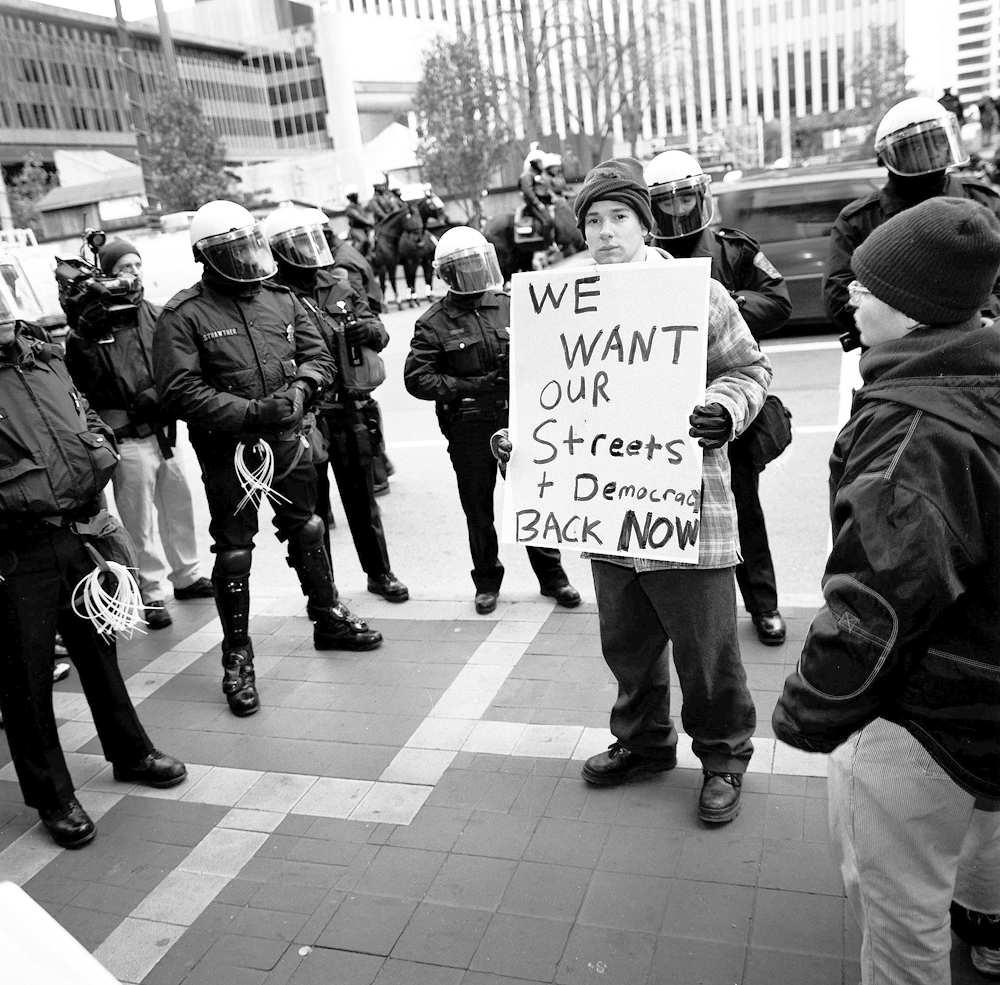 By way of introduction, here is one of Aron Conaway’s (aronconaway.com) favorite quotes by Dada founder and artist Hans Arp: “Revolted by the butchery of the 1914 World War, we in Zurich devoted ourselves to the arts. While guns rumbled in the distance, we sang, painted, made collages and wrote poems with all our might. We were seeking an art based on fundamentals, to cure the madness of the age, and find a new order of things that would restore the balance between heaven and hell. We had a dim premonition that power-mad gangsters would one day use art itself as a way of deadening men’s minds.”

LEO: What type of artist are you?
Aron Conaway: I would say that I am more of a live-artfully kind of artist than one who works in a particular medium. In my personal expression, I create in response to a situation, idea or derivative concept — and the materials and form often come secondarily to the subject. I work in whatever medium I feel most compelled and challenged by in order to articulate the angle, which I hope pulls the observer out of their default perspective and comfort zone. At risk of sounding pretentious, I like to flirt with irony, juxtaposition, awkwardness, ugliness, darkness to attempt to move the viewer to consider light, beauty, tranquility, openness, cooperation. Fear is the great motivator, as we get too comfortable, and we stop fighting for the things that we take for granted. I like to use abstract ideas to challenge rules, rigidity and authority – the modern dominant paradigm. I want to empower people to question dangerous and limiting ways of thinking. I like to remind folks that we are all free to think how we like and, best off, to live by the golden rule. And ultimately that greed is cancer.

When did you begin making art?
I always loved drawing, painting and building things since I was young. It never really occurred to me that being a professional artist was even a possibility, though. I guess I began my life as an artist just after graduating from the University of Louisville’s Hite Art Institute in the year 2001. I really appreciate the education I received there and in my year at the University of New Mexico on a student exchange, both of which gave me a broad understanding and perspective of the world. Back then, I was passionate and excited to jump in, and participate within, the local art community. I spent time around the Market Street art gallery scene quite a lot back then, as well. At the same time, I was still mourning the loss of the sanctuary that was university, as well as having no access to tools and space. This inspired me to start the Louisville Assembly of Vanguard Art in a space we came to call the LAVA House in Louisville’s Germantown neighborhood. That was when my idea of living as an artist, being communal and encouraging others to live artfully really began.

Artists find inspiration from unusual sources. What inspires you?
My source of inspiration depends on what kind of project I’m working on. Sometimes on more direct commissions I just sit and stare into space, sit some more … sketch, doodle and play with ideas. Kind of boring. But in my political and socially-driven work, I find myself most inspired when I’m reacting to the world around me, and then I use the objects that I acquire (physically or photographically) to interact with ideas. Most often, I find myself overwhelmed — caught up in a gut reaction — to something I see in my environment or community, music I hear or, oftentimes, read in the news. My generally levelheaded demeanor is totally subverted and engulfed in a flame of emotion and inspiration. In this process, I find myself bombarded by visions of images and sounds that articulate my constructed philosophies and beliefs in some way. The more dramatic and intense, the better I like it usually.

Currently, as we enter this unstable, uncertain political climate I find strength, inspiration and truth in materials that I come back to year after year. It’s obvious that we are going to have to band together and bang pots in the streets, but also we have to work today to create the new world that we want tomorrow. Art, music, poetry, all of it are a roadmap for our dreams and something to fight for.

What is something people do not know about you?
I attended the University of Louisville [and] earned my Bachelor of Fine Arts degree on full scholarship because I am an Eagle Scout. Many of my ideals and my determination to fight for a better world are a result of that experience (along with punk culture).

What are you working on now and what do you plan to do next?
Right now, I am rolling to completion on a 4,300-square-foot mural on Story Avenue that I have been working on with artist Tara Remington for eight months (with lots of help from my lady, Rhian). Also, I’m currently working on another mural design for the west wall of First Street Bikes on Market Street. I have really been enjoying doing mural work and hope to get more gigs.

I also have an ongoing radio show called ‘Rough Draft Radio,’ with my good friend Clayton Ray on Saturdays on 97.1 FM WXOX / ARTxFM.com. Radio is a great medium and has become a great outlet for me to share my love of music and muster all the resistance I can.

I have also been working on a plan to secure my warehouse building and [bring my] business, the MAMMOTH Studios, back to a legally functioning state. I have focused most of my creative energy on this enormous project for the last five years and intend to continue to do so into the foreseeable future. I see this 152-year-old, 90,000-square feet building as a giant curatorial, sculptural, installation space with enormous potential to house all sorts of creative people and projects. The challenge to getting the building reopened — un-condemned — at this point is repairing a bunch of vertical wooden basement posts that are holding the building up. Although the structure is solid, decades of water damage and insects have compromised the bottom few inches of about 40 posts. I plan on fundraising, working on a repair plan with a structural engineer, getting a plan approved through the city, then start construction on the repairs. Once open, I see the MAMMOTH as becoming a safe place for free speech, expression and gathering together to imagine… then work for a better future.