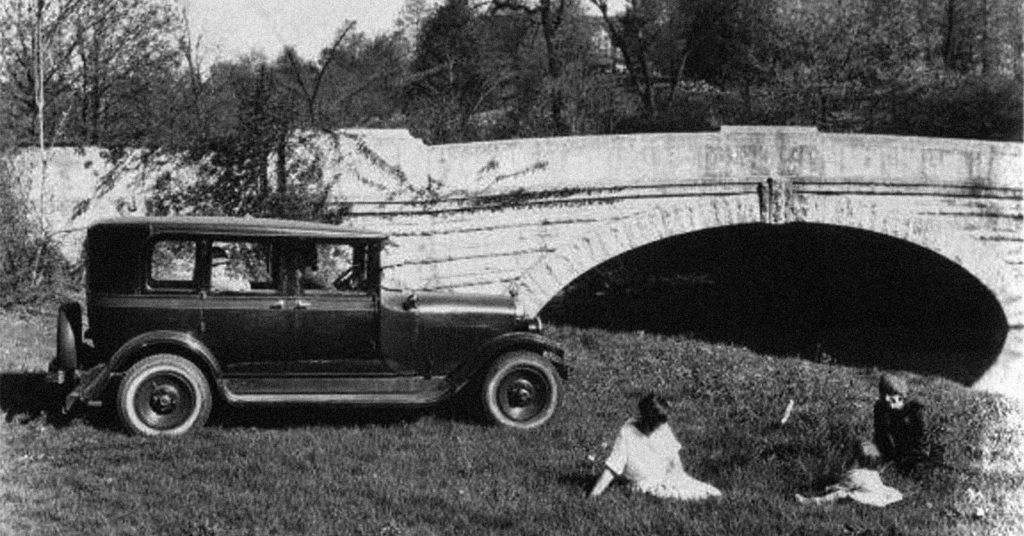 Cherokee Park has seen many phases of my life. My primary activity over the years at Cherokee Park has always been walking. I’ve taken all kinds of walks in that park. I’ve taken reflective walks in the woods. I’ve taken glorious morning walks with a fresh cup of Highland Coffee. I’ve taken somber walks, while working through my thoughts on the winding back trails, where no one else can see. I’ve taken anxious walks, where it takes everything I have just to leave the house and get outside. I have fought a 20-year battle with depression by taking walks, and Cherokee Park has been one of my greatest weapons. No matter what shape I’m in when I start my walk in the park, it always leaves me better than it finds me.

The Scenic Loop is my main stroll. The nearly two-and-a-half mile stretch provides a nice overview of what Cherokee Park has to offer. I like to park my car at Hogan’s Fountain which has a statue of Pan. You know, “Pan, Pan, the Greek god Pan, one half goat the other half man!” In the warmer months, I’ve seen deliriously happy dogs wading in the fountain as the park patrons pass by. The last time I was there, however, it was an unseasonably warm day in early February and there was a shirtless man strolling by. There was no doubt from the looks of him that he had been waiting all winter long to get his shirt off so that we could all witness his tough guy torso. Directly across from the fountain is the “Witch’s Hat,” a pavilion shaped like, well, the hat of a witch, that was nearly lost due to decay, but thankfully was saved to live on for another generation. I like sitting under the Witch’s Hat by the dirty grills after a walk and watching the sunset. Beyond the Witch’s Hat is a fairly decent playground complete with a spray park and some lively basketball courts of which I have no business being on. Then there are the bathrooms which certainly take the cake as being the worst part of the park. They always smell exactly the same, and that smell is not a good one. Beyond that is a softball field where I rarely see softball players but have seen folks LARPing (Live Action Role Playing), which on the outside looks like a bunch of people chasing each other around using fun noodles as swords, but no doubt feels much more real if you are in the game. Not being much of a fitness guy myself, I always feel a closer kinship with the LARPers than the hardcore exercise folks in the park.

Down around the way is the narrowest part of the loop. You have to really hug the curb here because cars can come whizzing by awfully close. Somewhere around here, just over the bridge you’re approaching the Nettleroth Memorial Bird Sanctuary. I don’t know exactly where it is, but as far as I see it, the whole park is a bird sanctuary, where I’ve spotted everything from hummingbirds to hawks to owls. Just beyond the bridge is the so-called Lover’s Lane. I don’t know if that is the official nomenclature, but it sure rolls off the tongue nicely, doesn’t it? Hop over a couple more stone bridges and you have arrived at Frisbee Field. The culture of Frisbee Field has changed over the years from a hacky-sacking haven for stoners to a place for heavy-duty sports played by heavy-duty men, and by heavy duty, I mean rugby. I’m pretty sure people still throw Frisbees there too, I mean, it is a park after all. Directly across from Frisbee Field is a hidden path that leads to the top of the tunnels that overlook I-64. It’s a pretty romantic little spot if you can find it — just don’t look down. Just past there, alongside the golf course, is the most challenging hill in the loop. It can be rough climbing up, but it does have my favorite vista on the Scenic Loop. It’s a side view of Baringer Hill, aka Dog Hill, which is often filled with pups of every size running amok up and down the hill between the occasional kite flier. It also makes for great sledding when the snow falls. There is an official fenced-in dog park behind the tunnel overlook but in my mind that big beautiful hill will always be where the dogs should go to run free. Once you summit the top of Baringer Hill, you are greeted with a gorgeous view above the treeline with only a protruding steeple in the trees to remind you that you are still in civilization. I have both fallen in love and stepped in dog shit at the top of this remarkable hill — separate incidents. On the backside of this hill there is an option to meander off the paved path of the Scenic Loop with a formidable set of stone steps to your right and a lovely more secluded path to your left. I highly recommend this path if you’re looking to get off the track and take a more leisurely stroll in the woods. (Pro-tip: This is where the owls hang out.)

We are now just a winding hill away from completing the 2.4-mile loop at the Eastern Parkway entrance, where a statue of Daniel Boone proudly stands watching over this local treasure that is Cherokee Park. Nestled between the busy boroughs of Crescent Hill and The Highlands, Cherokee Park provides a nice reprieve from the hustle and hubbub of city life, not unlike Central Park in New York City which shares the same creator, Frederick Law Olmsted.

Will Russell is cofounder of the Lebowski Fest and former owner of the WHY Louisville stores.