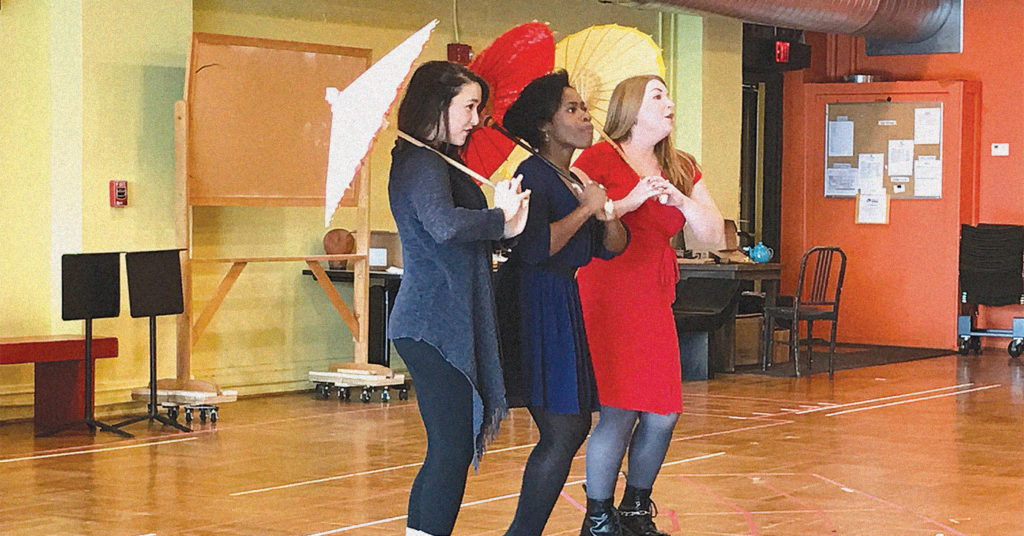 With characters cast with such ridiculous names as Pooh-bah, Pish-tush, Yum Yum and Pitti-Sing, it is difficult to imagine the Gilbert and Sullivan operetta “The Mikado” being played for anything but laughs. The rapid-fire singing and ding-dong dialog keeps the thing humming along at a dizzying pace, with an appropriately nonsensical plot.

But times, tastes and sensitivities have changed.

Some criticize the “The Mikado” as being insensitive to traditional Japanese culture. Stories in The New Yorker and The New York Times have detailed the difficulty American opera companies have encountered in staging “The Mikado.” The insult of depicting a ludicrous plot through characters clad in Japanese costume is troublesome to some. And the use of yellowface makeup — as has long been done on stage — is obviously a nonstarter.

At the time it was written, the composers were shooting for a satirical message, lampooning the strict conservative social mores of Victorian England. And to kind of disguise their intentions from the objects of their darts (who might not think it so funny), Gilbert and Sullivan set the Mikado story in faraway Japan.

The faraway Far East was just opening to Western view, and composers and novelists found the exotic, oriental settings especially appealing to the sophisticated theater-going class of the late 19th century. Over in the formal opera world, for example, Giacomo Puccini set “Madame Butterfly” in Japan, and French composer George Bizet placed “The Pearl Fishers,” on a South Sea Island. Later, Puccini, thought the American Rocky Mountains frontier would be ideal for “The Girl of the Golden West.”

Now, the challenge for producers of “The Mikado” is to recalibrate it for modern audiences.

“‘The Mikado’ is a wonderful operetta, but it has also developed a problematic history in its approach to other people’s culture, and caricaturing,” director Daniel Pelswig explained during a preview of the show last week on 90.5 WUOL’s “Lunch and Listen” program. Pelswig said he is sympathetic to the problem created by “misappropriating other people’s cultures.”

The solution, for director Pelzig and Kentucky Opera, is a wholesale restaging of “The Mikado.” The operetta is now set in London in 1985, with a cast of wildly theatrical types of 1980s London — spiky hair, outrageous clothes and all — ready to pillory the stuffy upper-crust class presided over by stuffy Prime Minister Margaret Thatcher. Kentucky Opera will do it like an opera company making a play. The show begins with a bare stage, building toward opening night.

“‘The Mikado’ was a curiosity in 1885,” said Pelswig. “The inspiration was an exhibition in Knightsbridge of a small Japanese fishing village. That’s what inspired lyricist W.S. Gilbert.

“I decided to set it in 1985, with a company celebrating the operetta’s 100th anniversary. Just like Victorian England, Margaret Thatcher’s 1985 England was morally and socially and politically conservative. I thought there was a great parallel in the satire of ‘The Mikado.’ And I also wanted to make sure that in doing a production of the play we would be very respectful.”

Of course, while Kentucky Opera is being respectful to Japanese culture, it’s open season for lambasting poor old Maggie Thatcher — with maybe a zinger, too, for today’s monied classes.

Or, one can put all that out of mind and just get caught up in the play.

Which, you may have heard, concerns the problem of a new law decreed by The Mikado, banning flirting.

That’s right, no flirting — which is a problem in particular for Nanki-Poo (sung by Daniel Shirley) and Yum Yum (Jasmine Habersham), because they can’t help themselves.

But it is also a problem for Ko-Ko (Kurt Olds), because the Mikado (Peter Strummer) has appointed him Lord High Executioner, assigned with the task of lopping off the heads of the convicted flirters. Ko-Ko grouses that he can think of more deserving list of people who, if executed, would not be terribly missed, including one who, “eats peppermint and puffs it in your face.”

A politician, in other words.

The top big-shot politico in the land of Titipu is the aptly named Pooh-Bah, sung by Chad Sloan. In a trio in the show, Pooh-Bah is teamed with his pass-the-buck pals Ko-Ko and Pish-Tush (Conor McDonald) in a song titled “I Am So Proud.”

“In this trio, I have been given the title of Lord High Substitute,” Sloan explained to the “Lunch and Listen” studio audience. “The Mikado has come to town. He wants to see someone executed, and we have told Ko-Ko that it should be him. Since Ko-Ko is Lord High Executioner, he has given me the title of Lord High Substitute — to stand in his place. Our trio is trying to figure a way out of this mess we have gotten ourselves into.”

Here, we’ll condense the lyrics a bit. Just imagine everything sung rapid-fire and back-and-forth. And you’ll notice it sounds a lot less like Japanese villagers than the House of Lords.

Pish-Tush — I heard one day a gentleman say that criminals who are cut in two can hardly feel the fatal steel. And so are slain without much pain. If this is true, it’s jolly for you.

Ko-Ko — And so, although, I’m ready to go, yet recollect t’were disrespect did I neglect to thus effect the same direct. So I object.

Pooh-Bah — And greatly pine to brightly shine, and take the line of a hero fine, with grief condine, I must decline.

Pish-Tush — How much you care I’m quite aware. It’s your affair and I’d drink your share, but I don’t much care.