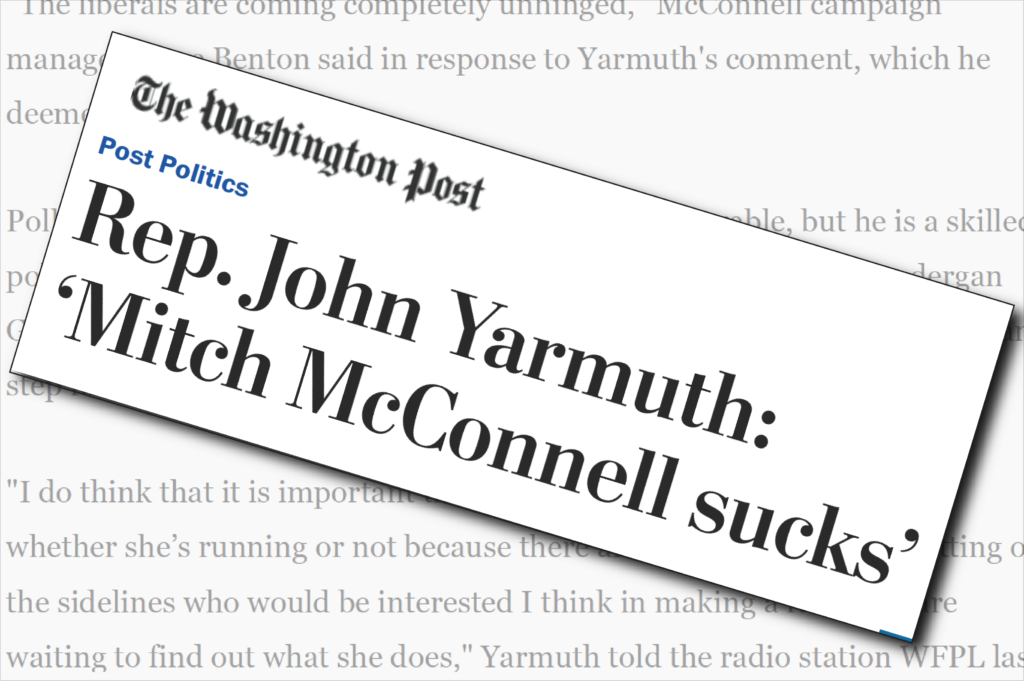 My dad, U.S. Rep. John Yarmuth, has known U.S. Sen. Mitch McConnell for four decades, for so long that he and a more-reasonable McConnell were even political allies early on. But his view changed during McConnell’s three decades in the Senate, as he told fellow Democrats at a 2013 dinner: “I can be really brief tonight and just say — Mitch McConnell sucks.”

Of course, I agree. However, in my most recent column, I describe his political strategy of obstruction for the last decade as deceitful and soulless.

Well, the deceitful, soulless McConnell was on full display once again this week, proving once more why he just plain sucks.

During the Senate confirmation debate on former Sen. Jeff Sessions, McConnell shut down Sen. Elizabeth Warren for trying to read a letter by Coretta Scott King — widow of Dr. Martin Luther King Jr. The letter, written in 1986, was part of King’s testimony against Sessions as the Senate debated his nomination for a federal judgeship. Sessions’ nomination in 1986 was ultimately blocked because of concerns over racist comments he had made.

Presumably, today’s debate over Sessions’ nomination for Attorney General should make the historical record, particularly the voices of the time, more vital to the debate.

According to McConnell — no.

Because this recounting of historical record would be a violation of Senate Rule 19, a vague, antiquated rule preventing one senator from denigrating another “…by any form of words impute to another Senator…”

History, facts and debate be damned! Sen. Sessions, whose reputation is already tarnished by a failed nomination due to his history of racial bias, will not have his name impugned by his own past. So says Mitch McConnell.

So why does this make him soulless?

What’s more interesting is that, since McConnell had Warren suspended for the rest of the Sessions confirmation debate, four other Democratic senators — all male — took up the mantel and read King’s letter on the Senate floor, without interruption.

So this would lead inquiring minds to wonder: Why is it OK for men to comment on a colleague, and not a woman? Unfortunately for all of us, Mitch will never answer this question. As Kentuckians, we know not to expect a straight answer from Mitch. For over 30 years in the Senate, Mitch not giving a straight answer is as dependable as the first Saturday in May.

This proves his soullessness.

Not to get too spiritual, but to have a soul, you understand that there are powers greater than yourself, and that you always have to answer to them. Alas, Mitch will never answer anything, proving once and for all, he truly is soulless.

Well, I think to accuse a politician of being deceitful — especially one who has been entrenched in the Senate for over three decades — would find bipartisan agreement. But this latest run-in could be very telling about Mitch’s particular brand of heartless deceit.

The Minority Leader, Democrat Chuck Schumer, has stated that, in his view, there was no particular strategy behind silencing Warren — that she just got under the Republicans’ skin and drove them to lose their patience. It’s possible. Warren has undoubtedly been one of the most passionate, aggressive liberal Democrats since she arrived in the Senate.

However, this seems very unlikely for political chess-master McConnell, who doesn’t know how to function without some political calculus. Many people, privately and publicly, have said they believe McConnell was trying to set up Warren’s national presence — make her the face of the resistance movement — so that she could be the next Bogeyman… Bogeywoman… whom the right can attack.

Either way, now because of McConnell, more people will have read Coretta Scott King’s letter than ever before, bringing Sessions’ racist past into the spotlight once again.

Which leaves us with two options: 1) McConnell silenced two important women — Warren and King — out of spite or frustration, or 2) he’s so manipulative that he used his colleague — dragging Sessions’ through another round of embarrassing press — to play politics.

From some of the responses to the Let-Liz-speak controversy, it is apparent that, to conservatives, Warren is the rallying cry. What transpired doesn’t matter, she is the raging liberal from Harvard who Trump called “Pocahontas.”

This isn’t hyperbole or hearsay. Right on cue, the night after the incident, Fox News propagandist Sean Hannity opened his show with a seven-minute monologue on Warren, calling her “fake Pocahontas” and “even more liberal than Obama.” Hannity may be an alt-right media tool of the GOP, but he is also the best indicator of how conservatives plan to fight a controversy or play political games.

As McConnell’s 30-plus years in the Senate would indicate, he probably knew this was the best way to rally his base around a common enemy… the loud liberal woman from Harvard University.

Yes, my money is on deceitful, not careless.

So McConnell, who sucks, is deceitful and soulless.