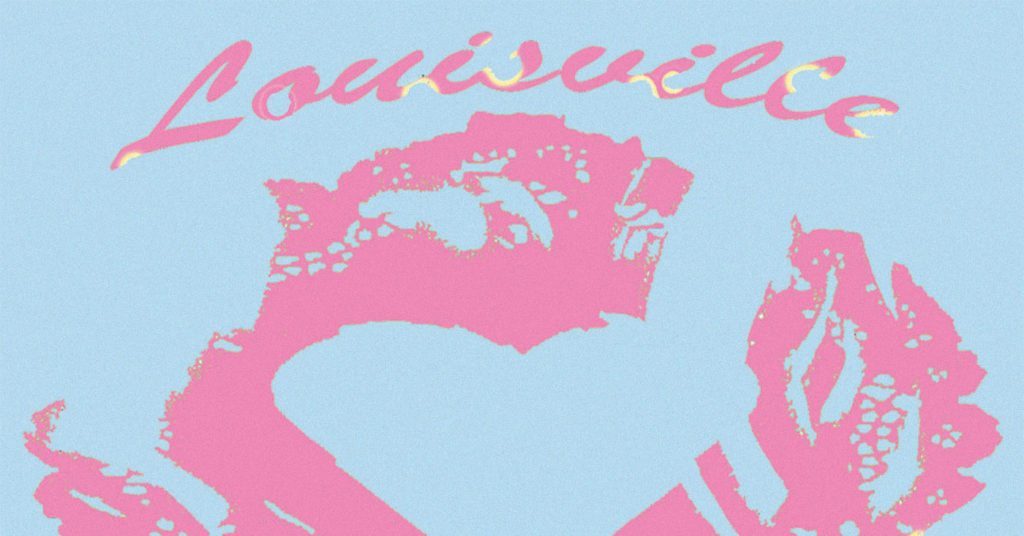 This year’s Louisville Is For Lovers compilation features 27 original songs from local musicians, covering all of the different directions love can take us. This year’s version is available on CD (300 copies) and through the Louisville is for Lovers Bandcamp page. And there are two shows surrounding the release: CD Release show Feb. 10 at Guestroom Records with Daphne Luster, Soft Self Portraits, Tender Mercy, New Mother; and the 2nd Annual Louisville Is For Lovers Brunch Feb. 12th (10 a.m.–3 p.m.) with The Winger Brothers and Alanna Fugate at New Wave Burritos. But first, we asked some of the musicians on the record for the story behind their song.

Kaleidico — “She Says Goodbye Like A Wave In The Ocean”
“Several years back my wife and I took a trip to Europe — neither of us had ever been. I wrote this song a couple days before we left home and worked out a lot of the lyrics while we were traveling. With the style being Paul Simon-esque — far different than what I typically do — I never knew where to place it, until this compilation came along. This love song is about my time there — the hospitable strangers, the glowing lights at night, and the beautiful languages I couldn’t understand.” —Matt More

Gallery Singers — “Lorain”
“There’s a town in northern Ohio at the U.S. border, where the Black River meets Lake Erie. It’s an old, steel town where the steel mill shut down and is now a towering framework of rusted metal that’s falling slowly into the Great Lakes. Jason Molina was born there. Images of a cold rain-drenched town staring across the blackness of the water on moonless nights creep up in many of his songs, as do images of leaving, walking away, going down an unknown road with its only attribute being that it leads out of town. Lorain, Ohio, must have broken his heart in such a way that only relationships can. The bitter heartache also keeps the memory of that someone safe in our heart. The idea was to write a song about a town that is also the woman who, at once, brings us the feeling that we need her more than anything and, at the same time, the feeling that we should head down that road away from her as fast as we can.” — John King

Matt Young — “Acrobat”
“This is a song about a friend of mine who had a hard way for a long time. Something we used to say is that, as long as your still moving, things could get better. He died yesterday. So now I guess it’s some kind of tribute to him.” —Matt Young

Pleasures of the Flesh — “Dragging Your Feet ‘Til The Tops Of Your Toes Bleed”
“We all love the love song, like it or not, because almost every song is, in some way, a love song. We’re all trying to capture the feeling, or create it, through the act of people listening and feeling something. The love songs that seem to move me more than any others are the ones that capture how insane and irrational being in love is. It makes no sense. That’s why our friends and loved ones call us out on the dumb stuff we do under the influence of infatuation. And that’s the truly amazing thing about love. We all hope to feel that type of love, where we would gladly cut our own hands off, no questions asked. Hopefully that sentiment comes through in ‘Dragging.’ ‘Let’s talk until our teeth fall out / let’s kiss in love blind bliss with blistered, bleeding open mouths.’ Yeah, it’s disgusting, but in the most romantic way possible.” —Michael Stewart

Tender Mercy —“What You’ll Find”
“A lot of my inspiration for songs comes from other people. Sometimes I overhear things in line at the store, or sitting in a restaurant. Mind you, I only hear one side of a few milliseconds of what is obviously none of my business, but once the flame of inspiration is lit, it is hard for me to ignore. ‘What You’ll Find’ is one of those and is basically about discovery and self-love. In the past, the narrator has been reluctant to analyze their behavior and its emotional cost on them. In this case, they seem to be in relationship that isn’t working out. Now, they see the error of their ways and are summoning the confidence to start anew.” —Mark Kramer

Alex Clark — “Be My Coach”
“This is a love song from the perspective of a guy who’s unaware that he’s actually a jerk — a bozo, if you will. Basically telling someone, ‘I want you until I don’t want you. I need you until you are no longer needed.’ So it’s kind of a callous concept, tricked into sounding like a sweet love song that features the world’s most-romantic instrument — the triangle.”
—Alex Clark

Saredren Wells — “Introductions”
“I provided the opening track (under the name Saredren Wells — an old nom de plume of mine). I don’t have a whole lot to say about my little ditty. Just that I recorded it off the cuff one day on a pump organ at Kevin Ratterman’s spot — La La Land — while we were on a break from recording Nothing/Everything (the album I released in late 2015). I’ve always loved pump organs. Who doesn’t? I was definitely trying to channel Jon Brion (the composer who scored Paul Thomas Anderson’s ‘Boogie Nights’ and ‘Magnolia’). I was just sort of screwing around and that melody showed up, so my friend Ross and I recorded it on our phones. Just a little blip in time. Happy it can serve as an intro to all the other lovely work on the comp.”—Andrew Rinehart

Soft Self Portraits — “Slow Dance”
“It’s an instrumental, and just like love, a lot of times you don’t need words to feel the energy. Originally, this song was an intermission that I used between the poppier and more mellow parts of my set, but now it’s taken on a life of its own.”
—Cody Johnson

Adventure — “Internet Love Song”
“A lot of this song was influenced by friends of mine using the internet to get back into dating. This song highlights the potential downside of that… a breakup doesn’t have to happen face to face, or even on a phone call. It doesn’t have to be a two-person thing. I guess it never did, so you could say this is simply the modern day ‘Dear John’ letter. It can be very solitary… our hero in this story is finding out ‘it’s over’ via the internet in the vacuum of their own home. They don’t make heartbreaks like the used to.” —Phil Medley

Satellite Twin — “Love My Be A Curse”
“This song may be solely responsible for Nate from Ohlm’s infected butt cheek. So listen with caution. Satellite Twin is not liable for any such incidents. Love just may be a curse. Sorry Nate.”
—Shane Poole

The Winger Brothers — “Big Pony Little Cowboy”
“‘Big Pony Little Cowboy’ started as a title. That’s been the way the band has been writing lately: We just kick around titles, and if it gets a laugh, we know we might have something. Originally, it was about a cowboy too short to mount his horse, but then it became about a relationship.  So I suppose it’s about going after that big fish, or pony, or partner. Shoot big, and then grab the reins and ride.”
—Jordan Humbert