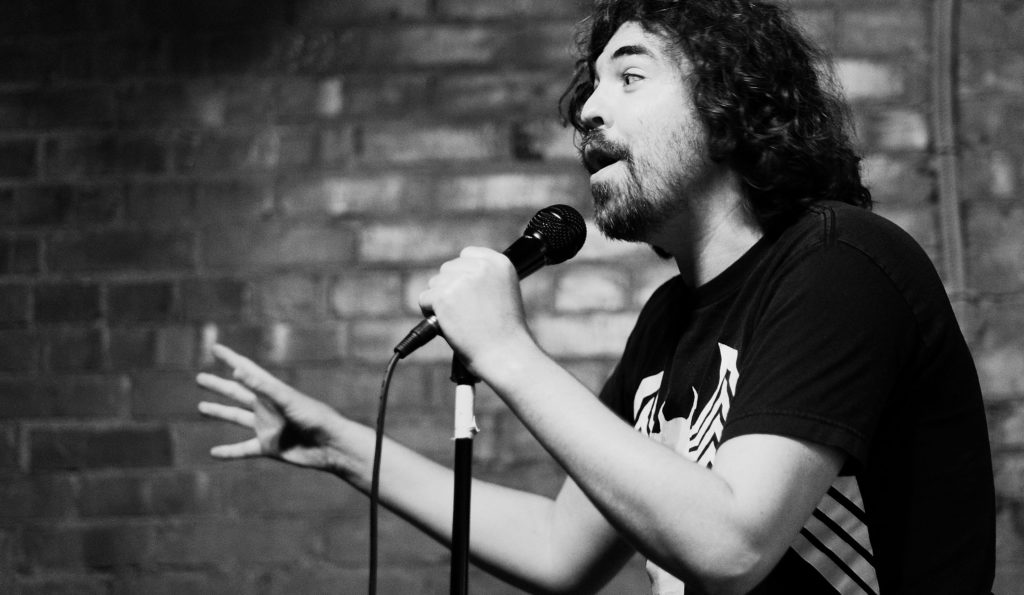 Seven years ago, Louisville’s comedy scene reflected the same reality that comedy was facing nationwide. While a nobody could get a bajillion views on YouTube, live comedy was withering and dying, already more than a decade past its mid-’90s prime. Local clubs were struggling to stay open.

But for some reason, in Louisville, little open-mic nights for comedians were springing up all over the place.

In Germantown, at a little karaoke bar called Groucho’s, one of the bar’s regulars, a jazz musician named Jake Reber, decided to give comedy a try. At the same time, a local comedian named Kent Carney won a LEO Readers’ Choice Award for best comedian.

Reber did more than just try comedy — he started hosting an open mic of his own at Groucho’s. He started meeting people, like Carney, Ranaan Hershberg and a whole group of comedians who were just starting out.

A year after that, Comedy Attack — the open mic that Reber started — was approaching its first birthday and Reber wanted to celebrate. At the same time Kent Carney won another LEO Readers’ Choice Award for best comedian.

This, of course, meant Carney needed to be teased. It’s an integral part of the scene. I think it’s how they show affection.

So Reber decided he could mark the occasion of his open mic’s birthday, tease Kent Carney and showcase his love for local comedians all in one night, with a mock awards show.

“The joke was no one could possibly win that LEO Readers’ Choice award, because Kent had it on lock, so we needed to create an award [show],” said Reber, in an interview with the LEO. “It just so happens that his name sounds perfect for a comedy award.”

And so the Kent Carney Awards for Comedic Excellence were born.

The first year featured four categories: Best Character Performance, Best Racial Joke/Routine, Miss Comedienne of the Year and Mr. Comedian of the Year. The event was held in the cramped confines of Groucho’s, the same cozy Germantown bar that hosted Comedy Attack.

Even though it started as a joke, Reber always hoped The Carney’s would grow to be something more: “It was, to use a Frank Zappa term, conceptual continuity. Meaning, if you do something long enough, people will catch on.”

Cut to last spring, when The 5th Annual Kent Carney Awards for Comedic Excellence packed the back room at The Cure Lounge, a room much larger than the space at Groucho’s. There was a house band to play intro music. The categories have changed and grown. Louisville Legend, Best Newcomer, Best Podcast/Radioshow and Golden Hustle have been added, while Best Racial Routine has been dropped, and Miss Comedienne has morphed in the the arguably less offensive Ms. Comedian.

But what hasn’t changed, is that the comedians of Louisville show up to accept awards, present awards, make off-color jokes and, above all, tease the shit out of each other.

I wouldn’t say the awards have made it to the level of being super serious, but they have definitely become a way for the comedy scene to come together and celebrate itself. And it’s time for them to celebrate again.

With 42 nominees in seven categories, there are too many comedians to get to know them all in one article.

But I hoped to get to know a few, and I headed down to one of the newer open mic nights in town, at Gallery K, to hang out with the nominees for Best Newcomer.

Gallery K is a Barret Avenue coffee shop, located in a large shotgun house, about halfway between Ultra Pop! and the artist formerly known as Lyn’s Paradise Cafe.

When I walked in, I was greeted by a friendly barrista, who is also a comedian, and co-owner of Gallery K, Wade Ridely.

Ridely is on the list for Best Newcomer. He’s been doing comedy for several years, but moved here to join Gallery K as a partner about a year ago. As such, he’s in a unique position to see the scene from the outside and the inside at the same time. He talked about his first impression of The Carney Awards.

“You know, coming from the outside, I thought it was an awful idea,” he said. “[Comedy has] so much competition, and we have no real metric for where we’re at on this ladder of laughter.” Part of that impression came from the scene he had left behind in Colorado.

“A lot of established comedy scenes have tiers of comedians, that won’t speak to each other,” explained Ridley. The professional comedians don’t talk to the amateurs, and the people that have been doing it for a couple of years don’t talk to the newbies. But Ridley said it isn’t like that in Louisville, and The Carneys are a great example of that. “You see competition break out, and that’s cool, but to see camaraderie is more important than anything else.”

Ridely jumped back behind the counter to make lattes, and sent my way another comedian up for the same award.

The decisions about nominations, and the winners, are made by a group that Reber calls “The Shadow Council of Comedy Elders.” It’s another aspect of the proceedings that is kind of a joke, but also kind of serious.

The loose rules allow Reber to also try to guarantee that the Carneys are — above all else — a good night of comedy.

As the rest of the Best Newcomer Category, and some plain old newbies, showed up at the Gallery K open mic, the small shop filled up quickly. The audience had just 14 chairs, inches away from the “stage,” a four-foot square scrap of floor with a mic and a small amp. It’s essentially a really spacious living room.

It’s a busy night for this open mic, and the audience ends up at about 20 people, many of them comedians.

Zac Carmen, another newcomer nominee, talked about how the intimate setting of this particular open mic makes it special: “Often times this particularly mic will turn into kind of a workshop…  veterans help out newbies, newbies can give fresh takes to veterans.”

Ridely and Carmen aren’t the only ones who talked about the how friendly and open the Louisville scene is. It came up in all the conversations I had at Gallery K. It also jives with what I’ve seen in the last couple of years as I’ve written about comedy.

So if you are a regular Joe — or Jane — who has the urge to give comedy a try, you’re gonna find a warm welcome. Like Greg Simms did.

Simms was halfway through 2016 before he finally did it, but he made enough of a splash that just six months later he’s up for Best Newcomer. And he’s pretty damn funny.

His set at Gallery K revolved around a giant blown-up senior picture of Simms, from back when he was obsessed with Garth Brooks. I laughed so much it hurt.

I saw a bunch of newbies at Gallery K  — several even newer than the newcomer noms — and not all of them were that funny. Then again, not all of them had the most hilarious senior pic ever to fall back on.

One woman was only doing comedy for her third time. She was ultra-green, and it showed. She was anxious, and scared, and it clearly kept her from being as funny as she might be once she’s more comfortable. But the crowd of comics gave her plenty of love. They’d all been there — new and anxious — most of them not too long ago. They welcomed her to the scene, and encouraged her to come back.

Maybe she won’t stick with comedy long. Maybe none of them will. A commitment to comedy is essentially a second job that doesn’t pay you. Louisville scene has grown by leaps and bounds in the years since Reber and The Carney’s got going, but most of the funny folk still aren’t quitting their day jobs.

But it’s nice to know that while they all chase that dream, The Carneys recognize the hard work they do.

Even if it’s all kind of a joke.