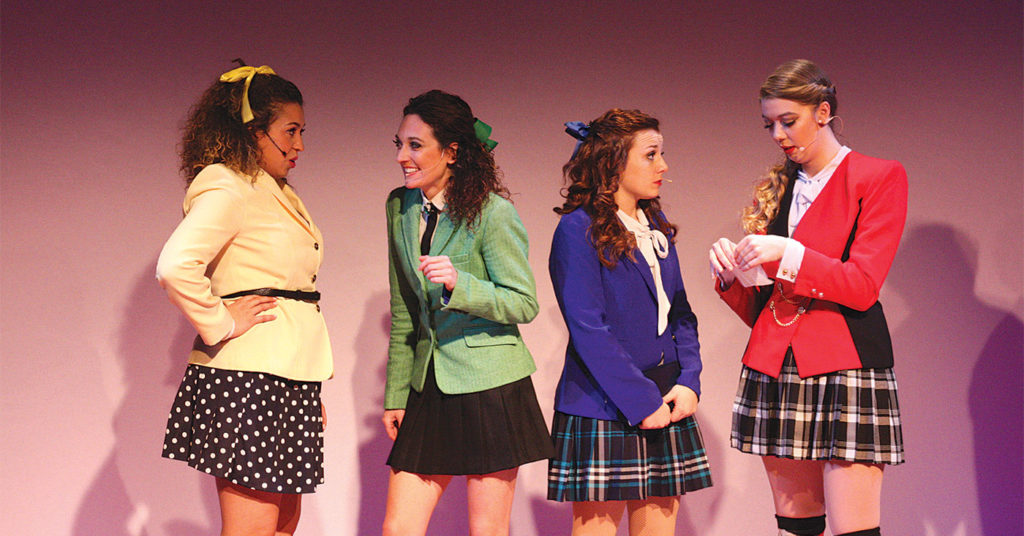 In 'Heathers: The Musical,' from left to right, Sara Troxel, Lauren McCombs, Shelby Brown and Brandis DeWilligen.PHoto by Corie Caudill

The title of Annie Baker’s 2009 play “Circle Mirror Transformation,” which opened last week at Actors Theatre of Louisville, refers to a theater exercise. As actors stand in a circle, one person starts the game with an action and sound. The others mimic the first, until all are moving in unison, at which point the next actor in the circle starts the process anew.

It’s just one of the many games that shape the structure and drive the narrative in this extraordinary piece of theater. The setting is a rather-drab, functional activity room in a small town community center, where an instructor named Marty (Tonye Patano) and four students have come together for summer course in “creative drama.”

The students are a diverse lot. Schultz (Keith Reddin) is a carpenter, vulnerable and still recovering from a recent divorce (well, not that recent: It was a year or so ago, though he still wears his wedding band). Theresa (Brenda Withers) is a former actress, with a brittle sparkle that masks the wounds of her own recent breakup. Lauren (Jeanna Phillips) is a dark, brooding teen who dreams of playing Maria in her high school’s production of “West Side Story.” And James is Tonye’s husband, a cheerful good sport with his own crosses to bear.

As a teacher, Marty focuses on the deep fundamentals of acting. She’s not concerned about learning lines or blocking. Rather, she teaches her charges about openness, courage, receptivity and living in the current moment and in the current space. The sessions are rich sources of physical and verbal comedy. After all, few things are funnier than watching superb actors play bad actors.

And these are superb actors, beautifully led by Director Meredith McDonough. And watching the individuals and relationships shift over the course of the action makes for quietly-riveting theater. The seemingly simple “circle mirror transformation” game may seem like a simple exercise in physical imitation — but it lays the foundation for more subtle exercises in imitation, empathy and compassion.

Each of these characters has a story line. But the power of this play flows not from the stories, but from the way they are revealed. As the games build in complexity and emotional depth, our understanding starts to shift, and notwithstanding the calm, natural feel of the narrative, we find ourselves plunged into fictions within fictions — or perhaps it would be more accurate to say realities within realities.

Last week, in a LEO interview previewing the show, Patano described the plays effect in optical terms. She suggested that the plays works like an Impressionist painting. “If you stand close to it, it’s hard to understand,” she said. “But as you step back, it becomes clear. There’s a point where you’re interacting with it, and then it changes.”

It’s an excellent metaphor — but it only hints at the emotional and psychological richness of this commanding piece of theater.

Meanwhile, there’s nothing calm, quiet or subtle about Acting Against Cancer’s boisterous production of “Heathers: The Musical,” by Lawrence O’Keefe and Kevin Murphy, based on the film written by Daniel Waters.

The setting here is a high school from hell. In this school’s social caste system, three Heathers stand atop the heap (Brandis DeWilligen, Heather McNamara and Lauren McCombs). Next in line are the athletic heartthrobs, football players Ram (Kyle Braun) and Kurt (Remy Sisk). At the bottom of the heap are folks including Martha “Dumptruck” Dunnstock (Rebecca Worthington) and a cadre of folks in such categories as “goth girl,” “stoner chick,” “nerd boy” and “prep boy.”

It’s a stratified structure, but every once in a while, miracles happen, and when Veronica (Shelby Brown) uses her gift for forging signatures to earn a boon from the head Heather, she is abruptly elevated. When Veronica is smitten with the brooding “Baudelaire-quoting badass” J.D. (Charlie Meredith), the stage is set for rebellion.

It’s a rebellion with a death count. This death count, and the assorted cruelties and vulgarities found in this dystopian educational institution, are framed in big, juicy, finely choreographed production numbers that probably deserve the moniker “guilty pleasures.”

Director Whitten Montgomery, Music Director Gayle King, Choreographer Maggie Patten and the other tech folks have done a great job of bringing the high-energy strut of this dark musical comedy to the stage. There’s not a dull moment, and there’s plenty to enjoy. When Veronica’s status seems in danger, Shelby Brown gives a terrific performance of “Dead Girl Walking.” Later on, in a weirdly-comic funeral scene, performers Josh Gilliam and Jared Burton deliver “My Dead Gay Son” with evangelical fervor. Rebecca Worthington’s wistful recollection of her “Kindergarten Boyfriend” injects a rare moment of sincerity in this raunchy, cynical script. And anyone who can watch “Freeze Your Brain,” J.D.’s eloquent defense of 7-Eleven convenience stores and their signature beverage, the Slurpee, without cracking up just has no sense of humor.

Yes, there are plenty of murders, and plenty of what I guess is called adult language, but it’s a very fine production that supports a good cause. •